Muslims in America: Integration through securitization 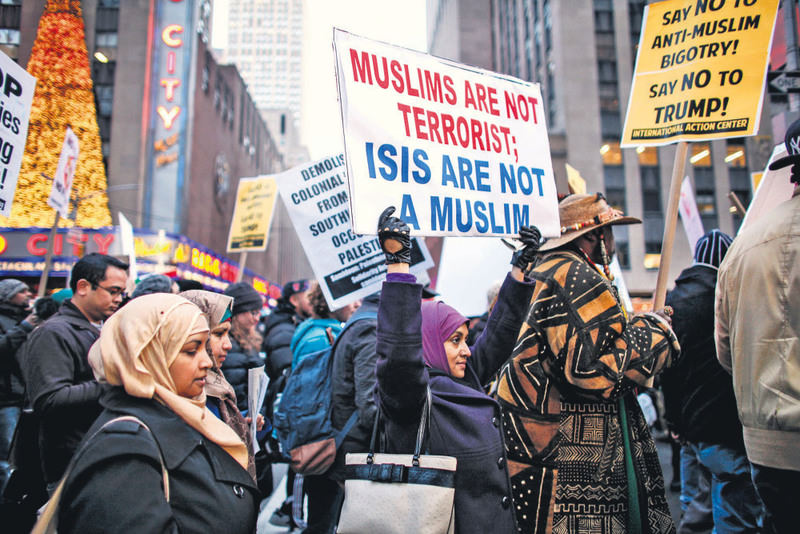 Jimmy Makino enlisted in the U.S. army and joined the famed 442nd Regimental Combat Team, the most decorated fighting unit in the history of the U.S. military. Makino was born in 1921 in Los Angeles and, as a Japanese American, was interned in the Gila River Relocation Center in Arizona in the mid-1940s. The U.S. government interned some 120,000 Japanese-Americans after the attack on Pearl Harbor and kept them in camps until the end of World War II, despite lack of evidence of any security threat. Volunteering for the U.S. army was the only way to escape the camp and "that was my way of getting out," was how Makino described his decision to join the military of a government that was interning his own community.

In 1988, President Ronald Reagan signed the Civil Liberties Act, which included an explicit U.S. government apology to Japanese-Americans and $20,000 in financial compensation to each surviving victim. Subsequently, the Civil Liberties Act was added to the National Archives and was put on display right next to the original Executive Order 9066 that authorized the internment.

The Japanese-American experience in World War II, in some areas, resembles what the Muslim-American community is currently going through. Muslims are under suspicion, assumed to be guilty by association and there is intense government scrutiny of every aspect of their daily lives. Immediately after the attacks of 9/11, I wrote of Muslims being subject to a "virtual internment," whereby collectively the community is subject to the same monitoring and controlling conditions found in World War II Japanese internment camps while not being confined within a physical space.

Increasingly, the integration of Muslims in American society mirrors that of the Japanese in the camps, where volunteering for the security institutions is the measure of one's membership in society. As this virtual internment intensifies so will the need for more community insiders to implement the security system and the total monitoring program.

Here, integration is carried out through securitization of the community. What is securitization and how is it differentiated from normal policing and serving communities' needs? The term securitization is used extensively in international relations and it describes the process of state actors transforming subjects into matters of security and existential threats. Securitized subjects receive disproportionate security attention and massive resources are deployed to govern their movement and regulate participation in the normal affairs of society. In their book, "Security: A New Framework for Analysis," Barry Buzan, Ole Waever, and Jaap de Wilde identify the purpose of securitization studies as being to identify "who securitizes (securitizing actor), on what issues (threats), for whom (referent object), why, with what results, and not least, under what conditions."

Integration becomes meaningless within securitization since membership in society is curtailed by security structures and a system of negotiated rights and privileges are used to control and modify behavior. Here, citizenship is equivalent to an inmate's cell and citizenship rights boil down to controlled conduct in a prison which is governed by the guards.

In the same way that the Japanese-Americans who were interned had one way out of the camps, Muslims are given one golden ticket out of their virtual internment by joining the securitization structure that govern their community. On a regular basis, organizations, imams, and leaders call on community members to join security agencies as a way to become integrated into American society. At times, the weekly Friday sermons and/or monthly community gatherings are overtaken by public relation encounters with the FBI and Homeland Security agents who are both recruiting and mapping the community for the securitization program. The constant refrain from community leaders and imams who already internalized the virtual internment structure is that if you have nothing to hide then you should be open to these encounters.

On more than one occasion, a San Francisco Bay Area Muslim list-serve received job announcements from security agencies and forwarded by community members who emphasized that this would be a great opportunity for integration into American society. Similarly, it has become customary at Muslim and Arab national conventions and gatherings to have securitization agencies recruiting tables prominently positioned in the halls, which for some is a sign of inclusion and acceptance. Consequently, Muslim citizenship is governed by a securitization structure whereby it creates a separate categorization from the broader society and normative constitutional rights and privileges are regulated by security agents. Integration through securitization leads to structural disenfranchisement and collective disempowerment because individual participation in the security apparatus is predicated on affirming the transformation of Muslims as a class into securitization subjects.

While Makino had his ticket out of the camps, Muslim participation in the securitization apparatus will not lead to equality and full membership in American society. In the same way that African-American participation in the securitization of their community has not, up to this point, lessened racism, police brutality and daily structural violence. Equality, dignity and freedom for Muslim-Americans are predicated on resisting the securitization apparatus while insisting that individual rights to pursue one's God-given potential is not manipulated to negate the possibilities of future horizons.
RELATED TOPICS