Trump and the Islamophobia imaginary 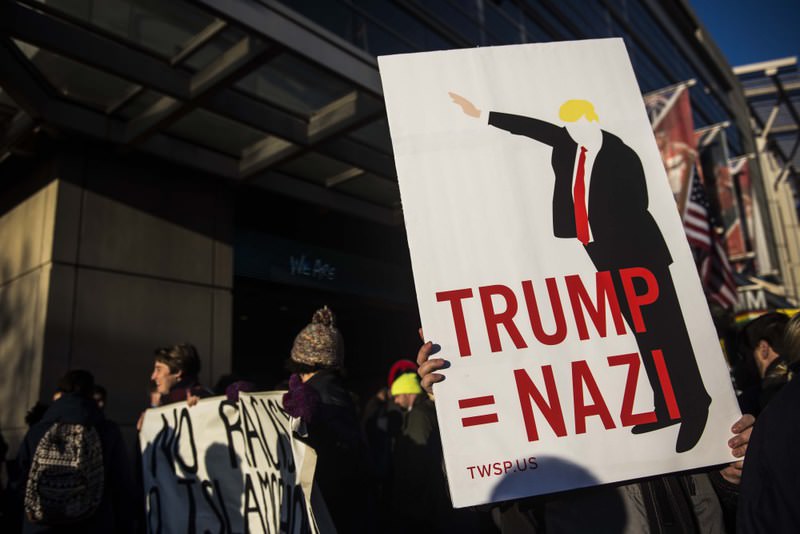 People demonstrate against Trump's racist rhetoric outside of the Verizon Center during the American Israel Public Affairs Committee (AIPAC) conference in Washington.
by Hatem Bazian Mar 24, 2016 12:00 am

Donald Trump's response was "I think Islam hates us," to Anderson Cooper's question to the candidate if "Islam is at war with the West." Trump added that "But there is a tremendous hatred. And we have to be very vigilant. We have to be very careful, and we cannot allow people coming into this country who have this hatred of the United States and of people that are not Muslim." Trump doubled down on his comments during the Republican debate hosted by CNN on Thursday March 9th when the debate moderator Jake Tapper asked Donald Trump if he meant "all 1.6 billion Muslims." Trump emphatically responded, "I mean a lot of them."Trump's primary source of information is TV news and talk shows, which illustrate the total saturation of the airwaves and public atmosphere with Islamophobia discourses. Here, Trump is parroting the dominate media narrative and not being original but more crude, lacking the sophistication needed to maneuver into the normative polite racist.

The media and public discourse has produced an Islamophobic imaginary that is dominating society's discourse and view of Islam and Muslims. The constructed imaginary about Islam and Muslims has been under formation in the West for a long time and in some instances can be back as far as the Crusades if not even earlier. In this imaginary , Islam and Muslims are judged and approached by the already constructed imaginary and never allowed to enter the discourse independently or outside this layered mirage. Islam and Muslims becomes what is imagined, dreamed and incepted in the confines of a closed-circuit internal reproduction system that always points back to the imagined. A movie set constructs an imaginary space, time and human interaction, which once released in theaters manages to shape the discourses concerning what was produced.

Just like the Star Wars movies have created a rich discourse and tapestry about an imagined and unreal space, Islamophobic imaginary has had success in forging a similar response. What people see and experience daily about Islam and Muslims is akin to a well-arranged studio set with characters and props to fit into the Islamophobic imaginary. Accordingly, the "news" and society's "leaders" end up reproducing what the well-stitched imaginary dictates on a daily basis. Furthermore, when for a moment or in complete error the narrative departs from the imagined norm then it is corrected by pointing out that these represent the "good" exceptions rather than the dominant norm itself. Here, the Islamophobic imaginary gets its ultimate success by creating the good/bad Muslim framing while being crafty at promoting those exceptional voices that are mirror images or replicating the "superior" Western norms.

The Islamophobic imaginary reduces everything related to Islam and Muslims into a singular frame that is negative and constructed solely in relation to terrorism and violence. Facts, data and real narratives are all irrelevant for those operating within the Islamophopbic imaginary since the constructed frame filters everything and reduces it to what has become fixed and constant in the mind. If athletes are trained to imagine the game or competition beforehand so as to actualize it once played, then the Islamophobic imaginary does the same and produces the needed pre-conditioning for society when approaching Islam and Muslims.

Immediately after September 11, 2001 the question, "why do they hate us" was parroted by the media and political leaders alike to an American audience that was rightly feeling the pain and suffering after the terrorist attacks. In framing the problem as a question that can't be answered and keeping it out of the realm of policy. The result is a disconnect that got created between those specifically responsible for the crime in the minds of people and Muslims as a group, which Trump is resurrecting in the CNN interview blaming the majority once again.

If for a moment, we take Trump's statement on CNN to be factual then let's ask, what would be correct Jesus' like response to it? How would it be possible for a candidate that is neck deep in the bigotry rhetoric mud to have the unvarnished audacity to make such a claim? I for one don't expect an answer from a factually and truthfully challenged Trump on this front since his mind is located within the Islamophobic imaginary where nothing is real except bigotry, racism and bullying.