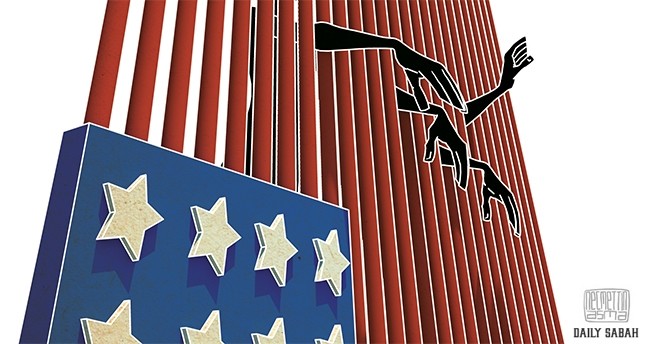 Illustration by Necmettin Asma - twitter.com/necmettinasma
by Hatem Bazian Jul 14, 2016 12:00 am

It was an increasingly a normal week in America's violence-riddled streets and cities. The response and solidarity expressed after the murder of the officers by Micah Johnson, a 25-year-old African-American former Army reservist, was appropriate, but also incomplete. We are experiencing a profound entrenchment of racial attitudes and a collapse of the civil rights pact that emerged from the 1960s movement. What happened in Dallas cannot be separated from the long list of deaths and mayhem that has been ravaging the African-American community in particular and American society in general, which is heavily impacted by race relations.

Here, and mere days before the Dallas shooting, another chapter in America's race saga witnessed two more African-American men joining the long list of hashtags and bodies piling up at the morgue of indifference located at the intersection of structural racism and injustice. Both Alton Sterling and Philando Castile joined a long list of African-Americans killed at the hands of the police after a simple traffic stop that under normal circumstances, or if it involved a white person, would have been a ticket or resulted in friendly advice from the officer. The mere fact that African-Americans are regularly shot and killed in their encounters with police officers - 2.5 times as likely to be shot by a police officer than a white person - should be a concern to everyone and especially for the political leadership that has become hostile to social justice and deaf to painful cries coming from the inner city.

Confronting race and racism is the center of the current crisis, or more precisely, the refusal to account for the large white supremacist elephant in America. What is happening in America's inner cities and among African-American communities is directly connected to the failure to address structural racism and build on the compromises of the 1960s civil rights acts. The 1960s brought about a number of critical reforms, which included the Civil Rights Act, the Voting Rights Act and the Immigration Rights Act, among others, which were intended to transform the entrenched Jim Crow Laws that kept slavery-like conditions after the Civil War.

For African-Americans, segregation translated to a structural and constant process of under-development coupled with heavy doses of violence that included lynching and police violence. A study by the Equal Justice Initiative documented a total of 3,959 victims of lynching in southern states between 1877 and 1950, a period extending from the post-Civil War era until after the end of World War II. Lynching was a tool to keep black people "in their place" and to terrorize them into submission to white supremacy in the post-slavery period.

The 1960s civil rights acts were an attempt to reorient society away from structural racism and into inclusivity by means of a gradual and legally protected process. Access to education, employment opportunities and economic upward mobility were key tools in this gradual process. However, just as the engines of change began to take shape across America and toward inclusivity, so did reactionary, racist and xenophobic pockets of resentment commence in earnest to organize a counter strategy.

Indeed, challenges to the gains made by the civil rights movement was immediate and took many shapes, including the assassination of Martin Luther King and the targeting of other African-American leaders in the process. On the legal front, a host of lawsuits challenging affirmative action and policies intended to bring about diversity were pursued almost immediately and as early as 1969 in New York City, which saw a teacher's union's opposition to affirmative action, which also occurred in other states. Furthermore, in the South, the political shift toward the right began to take shape and centered on opposition to the mandated civil rights regulations intended to bring an actual end to almost a century of segregation and Jim Crow laws.

The domestic scene in the 1960s was further complicated by the Vietnam War and the coalescing of anti-war and civil rights movements on the streets and in cities across America. Consequently, the emerging and reactionary right in the South and other parts of the country was able to construct a narrative of victimhood centered on the "liberals" who caused "us" to lose the War on Vietnam and pushed for the civil rights legislation that weakened white America's hold on power at home. "Make America Great Again" is a theme that gets stitched back to the 1960s and 1970s, and it means to reassert the "traditional" order of things in America, which includes African-Americans and minorities knowing their place in the society.

America's inner cities and African-American communities ravaged by violence, economic inequalities, failed schools, and fractured horizons are the direct outcome of the collapse of the 1960s civil rights pacts. More importantly, the coming to power of President Ronald Reagan in 1980 should be seen as the beginning of the reactionary right-wing coalition's re-emergence into power and the setting of the stage for slow and gradual reversal of the civil rights pacts of the 1960s. Reagan and his new emboldened right-wing coalition intended to reverse the structural gains of the 1960s and 1970s by means of legislations and executive orders. Reagan's policies set in motion the machinery that fractured the civil rights gains, while making a habit of blaming African-Americans, minorities, labor unions and women for their deteriorating conditions. Who could forget Reagan's attack on African-American "welfare mothers" that were abusing the system and the push for the Sentencing Reform Act that transformed Black men into a commodity for the prison industrial complex? Who could forget the attack on working class Americans by targeting unions and pushing for massive deregulation of the economy?

Importantly, on the international front, Reagan's policies contributed to the flooding of America's inner cities with drugs from two foreign interventionist projects: Latin America's wars and Afghanistan's confrontations with the Russians. Wars abroad translated into drugs at home, which was a source of financial support to fund these foreign adventures. The domestic and transnational political structures were regressively infused again and the consequences are

visible in America's inner cities and abroad. It is easy for talking heads in the media to point to Micah Johnson's murder spree or the frequent police officers' shootings of unarmed African-Americans but rarely are they ready to confront race and racism, domestically or internationally, and how we got to this stage in the first place.

Democrats should not be absolved of blame. President Bill Clinton's if-you-can't-beat-them-join-them approach and going after Reagan's Democrats in the 1992 elections, which shifted the party to the right through setting up the Democratic Leadership Council is another aspect of the issue. Indeed, Clinton's embrace of the shift toward the right was evident in commencing an attack on "welfare mothers," abandoning his defense of affirmative action, while making sure to pick a fight with the Rainbow Coalition and joining Republicans in adopting neoliberal economic policies, further deregulating the financial sector and pushing for the North American Free Trade Agreement. Welfare reform becomes a code word for being tough on black Americans, and both Democrat and Republican embrace this racialized coding.

If you lost your job, ended up on the streets with mental health issues, had more opportunities to end up in jail than in Yale, then look no further than the combined effects of Reagan's and Clinton's policies. They paved the way for the current crop of dead-end politics that is delighted to blame Black Lives Matter activists for those lives that no longer matter in the macro calculus of America's domestic and global racial politics.

Black lives do not matter at all, and if evidence is needed then go no further than your daily news cycle or a short visit to inner-city jails or hospitals. They will provide you more detail than going to a day-long session on any hearing on race or racism. The cruel reality is that white working class lives don't matter either, and cops' lives might matter a little more, but it boils down to different segments of America's gladiator arena set for the pleasure of a ruling class that is

criminally indifferent to the racial edifice it built. Confronting race means coming to terms with America's multi-layered industrial complexes that benefit and are enriched by the operative racial matrix that informs, regulates and nurtures every part of the society.

Policies have ramifications and African-Americans have been the permanent canary in the perpetual racial coal mine through which the results can be measured, witnessed and ignored. Here, a significant point needs to be made that no one ever asks: "How does the canary feel being doomed to death to warn others about an impending death?" When will we make the needed shifts in policies and solutions that makes the metaphorical societal mine safer for the canaries and lets them fly free inside and outside the mine? Today, America is exuding toxic racial fumes that are killing and disfiguring everyone involved in the society, and the time is her to reimagine a new civil and human rights movement centered on seriously confronting race and making it possible for African-Americans to breathe again.
RELATED TOPICS