Erasure of the human 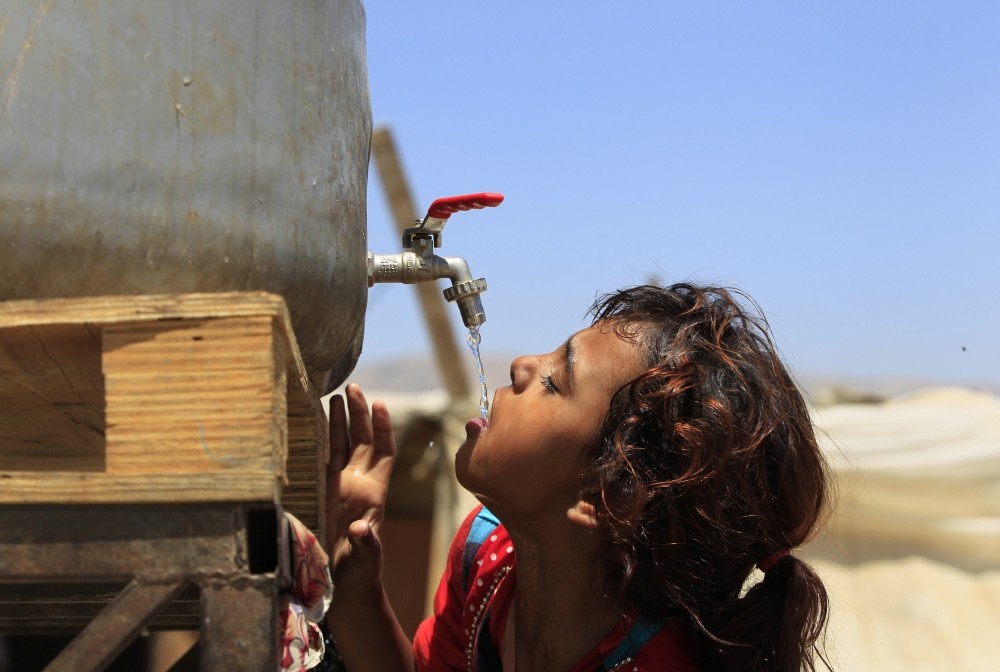 Syrian refugee Amani al-Antar, 7, who fled with her family from the city of Deir al-Zour, Syria, drinking water at a Syrian refugee camp in the eastern Lebanese town of Saadnayel, Bekaa Valley.
by Hatem Bazian Aug 18, 2016 12:00 am

The refugee crisis from Africa, Asia and the Middle East was caused by successive policy failures, European and American interventions in countries too numerous to list, Cold War politics, globalization, crony capitalism and market domination

In France, I encountered a number of refugees who had their fingerprints completely scratched over, burned or partially disfigured. One of the main distinguishing features of being a unique member of the human family is reflected in fingerprints, as no two are identical. A fingerprint is a defining characteristic of every person around the world. What happens when it is erased, burned or damaged? More importantly, what is the implication if in the attempt to save one's life and escape death or misery results in the obliteration of one of the distinguishing features of their humanness? How does it feel to be forced to obliterate one's humanness so as to be able to arrive as a refugee in a country that has written you off as a mere commodity not worthy of admission and recognition? Being a refugee and escaping one's home is bad enough, but having to undergo a process of self-erasure in order to avoid the exclusionary structures put in place to prevent your arrival to safety is even harder. In a supposed effort to regulate and control refugees streaming into Europe across the Mediterranean, the European Union set up a centralized database to collect the fingerprints of every refugee who arrives on the continent. From a policy perspective, the fingerprinting process is intended to track refugees and establish the point of entry and regulate their subsequent movements in Europe. More importantly, the right to refugee status, as per European Union policy, is connected to the first port or country of entry, which tends to be Italy, Spain or Greece. The arriving refugees tend to land on the shores of these three countries along the continent's southern coasts, and then they make their way to Germany, France, the U.K. and countries further north.

Upon arrival in southern Europe, a refugee is registered and fingerprinted, which immediately assigns them to the receiving country rather than to the European Union as a whole. Italy, Spain and Greece as well as others become the responsible countries for these refugees and are assigned the responsibility to address their needs, which interestingly enough does not include facilitating their movement to northern countries.

Entering fingerprints into databases and monitoring them is a sophisticated system of control and restriction on movement outside the first country of arrival. Again, Northern Europe utilizes its legal framework to give the impression of supporting and helping refugees while in reality wanting to prevent their movement and settlement. Every country wants to shift the problem away from its borders and uses all existing laws to resist serving the people who badly need a safe haven.

Registration and fingerprinting in Southern European countries creates a refugee border and localizes the problem, which from Northern European countries' perspectives prevents the massive ongoing influx of people arriving daily. The refugee problem is serious and solutions must be found to address the daily misery of the thousands of people who are escaping civil wars and total economic collapse. How to regulate and normalize the movement of people is at the heart of the current crisis.

As refugees arrive in Italy or Greece and are then fingerprinted, their information is entered into the centralized database. Many refugees manage or get assistance to leave their country of entry, say Italy or Greece in this case, because they are unable to keep up with the thousands arriving daily and do not get the needed support from the northern part of the European Union. Northern European countries do not want to admit refugees into their borders, and registration and regulations are used as the metaphorical wall to stop them at the coastal regions.

Since refugees know that their fingerprints are stored in a database, they intentionally work on damaging their fingertips so once their new country catches them, the government cannot locate their information in the database. Not having the information available in this second country makes it possible for a refugee to apply for status in this country as if it were the first place of arrival. The process of refugees damaging or burningfingerprints so as to erase the distinguishing features of themselves continues as they cross from one European country to another until they are able to reach a destination that is somewhat welcoming and grants opportunities.Refugees are negotiating through the European Union's exclusionary policies and walls of indifference to their plight. The way to understand how problematic and xenophobic the European Union has become can be seen through the basic comparison with Turkey alone having some 2.7 million refugees and possibly more who are not registered while France has only taken in some 25,000. Admittedly, Germany has been the exception with 1 million refugees allowed into the country has along with providing the needed services, but the European Union as a whole should be ashamed of its response to this humanitarian crisis.

Here we must point out that the refugee crisis from Africa, Asia and the Middle East was caused by successive policy failures, European and American interventions in countries too numerous to list, Cold War politics, globalization, crony capitalism and market domination. The refugee problem was caused and belongs to all of Europe and the United States, which means they have the moral and ethical responsibility to prevent the erasure of the human on the doorsteps of their borders. Human rights conventions and international law looks good on paper, but when fingerprints are burned then the challenge of giving meaning to the principles that lay flat on the surface of white papers is not met.
RELATED TOPICS