France's burkini ban: The theater of the absurd - 'not wearing an outfit respecting good morals and secularism' 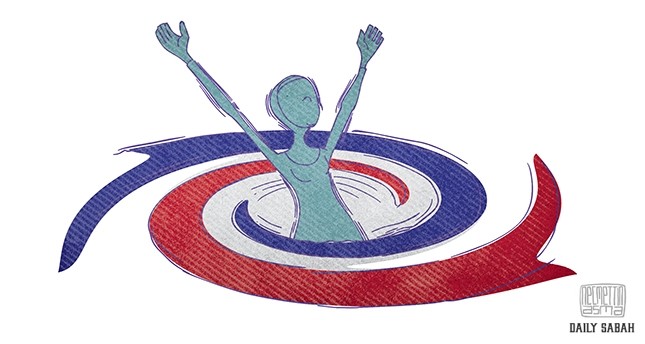 Illustration by Necmettin Asma - twitter.com/necmettinasma
by Hatem Bazian Sep 01, 2016 12:00 am

'Good morals and respect of secularism' are in vogue in France again with political figures who are situating themselves for next year's presidential elections, veiling their own moral bankruptcy behind the ban of the burkini

The attempt by a number of French coastal mayors to ban the burkini is a clear sign that Islamophobia has entered the theater of the absurd. How else can we explain this new attack on Muslim women in civil society other than as an absurdity that is backed up by law and power? When the police on the beach gave a Muslim woman a ticket for being dressed in a burkini, the charge written on the ticket was laughable had it not been real: "Not wearing 'an outfit respecting good morals and secularism.'"

The idea that a Muslim woman sitting or using the beach while wearing a burkini constitutes a violation and that such a garment does not show respect for "good morals" or the ever-elusive and all-encompassing secularism is absurd. If we examine the French engagement with beach clothing over a long period of time, we are likely to find that the definition of "good morals" was constantly shifting and with it the scope of secularism.

What is more absurd is that if a Muslim woman wore a surfer's wetsuit on the beach she would be respecting "good morals and secularism" but not so for the burkini, which covers exactly the same parts of the body. Furthermore, nuns who come to the beach with kids from Catholic schools and are dressed modestly in an outfit that is identical to the burkini, including the head cover, would be demonstrating "good morals and respecting secularism" despite the religiously mandated clothing.

The level of absurdity goes even further; For example, if bikers decided to lie on the beach with their leather outfits and helmets, does this constitute a violation of "good morals" and a sign of disrespect of secularism? Clearly, examples of what is possible and what is not when it comes to this new ban are endless. However, the ban is intentionally directed at Muslim women and no one else because the French have identified Muslim women's clothing as symbols of otherness and incompatibility with the "norms" of European society.

Banning the burkini builds upon a set of earlier laws that targeted the hijab and the burka as symbols of incompatibility with French secularism and culture. Here, the French argument is that clothing constitutes a form of oppression for Muslim women, and the state should intervene to remove the harm inflicted upon them as a group. French Justice Minister Laurence Rossignol compared Muslim veil wearers to "negroes who accepted slavery," thus implying that the government law is intended to free Muslim women who consented to their own oppression. Certainly, Rossignol's statement was met with rightful condemnation from anti-racist and rights activists who saw the total insensitivity to the history of slavery and the distorted idea that slaves somehow consented to their own condition.

Indeed, a line of argument can be found that projects responsibility unto the slaves for their condition rather than the slave master or the broader economic, political, social and religious institutions that made slavery possible and profitable. French fashion mogul Pierre Berge supported Rossignol by stating that those who design clothing for Muslim women are actually engaged in furthering the "enslavement of women" and fashion is intended to "give women their freedom." Berge demanded that fashion houses should "renounce the money and have some principles" by supporting the ban on the veil and the French government action to defend secularism.

Interior Minister Bernard Cazeneuve took another approach by convening a meeting with Muslim leaders, civil groups and government officials to discuss "French Islam," a sort of Islam meant to reconcile Muslim and French secular values. "The implementation of secularism, and the option of adopting such decrees must not lead to stigmatization or the creation of hostility between French people," said Cazeneuve after a meeting with the head of the French Council of the Muslim Faith (CFCM). Again, the contradiction of a secular state engaged in the construction of a religious discourse intended to "reform" Islam on its own terms puts the notion of separation of mosque and state on its head. What is the meaning of church-state separation if the state pursues a religious project to transform a religious minority so as to fit the cultural, religious and political "norms" of the majority?

A French court took the matter after human rights organizations complained and issued an order that overturned the ban on Muslim burkini swimsuits. The Council of State's ruling was directed at the southeastern town of Villeneuve-Loubet, which was the first to put such a ban in place, but the decision is expected to affect some 25 seaside towns that have issued similar bans. BFM-TV said, "However, the mayor of Sisco on the French Mediterranean island of Corsica said he would not lift the ban following the ruling." The mayor, Ange-Pierre Vivoni said, "Here the tension is very, very, very strong, and I won't withdraw it."

"Good morals and respect of secularism" are in vogue in France again with political figures who are situating themselves for next year's presidential elections, veiling their own moral bankruptcy behind the ban of the Burkini. Those running who do not have a plan for the French economy, challenges of massive immigration, multiple failure to integrate those who are not "French of the source,"incoherent European Union policies on many fronts and utter chaos in foreign policy find the burkini their only cover. Having police publicly undressing Muslim women on the beach becomes the only way that French political elites can cover their very much exposed Islamophobic agenda.
Last Update: Sep 01, 2016 1:04 am
RELATED TOPICS