Negotiating alliances in the age of Islamophobia 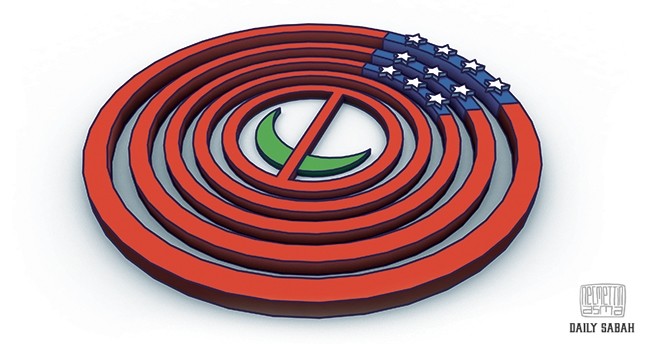 What do Islamophobic figures like Daniel Pipes, Steve Emerson, Wafa Sultan and Nonie Darwish have in common? Many answers come to mind, but not the one that I am seeking. The answer is that all of them are recipients of one award or another from the American Jewish Committee (AJC), which were conferred upon each of them precisely because of their strident Islamophobic discourses. Other recipients of AJC awards include Ayaan Hirsi Ali, Magdi "Mosques are a Cancer" Allam, as well as Salman Rushdie.

Recently, the AJC and ISNA (Islamic Society of North America) formed the Muslim Jewish Advisory Council, a body that "brings together recognized business, political, and religious leaders in the Jewish and Muslim American communities to jointly advocate on issues of common concern." The published goals of the Council are: 1. "To highlight the contributions of Muslims and Jews to American society, and aim to celebrate their contributions in the best traditions of American democracy; 2. To develop a coordinated strategy to address anti-Muslim bigotry and anti-Semitism in the U.S; and 3. To work to protect and expand the rights of religious minorities in the U.S., as enshrined in the Constitution, so they may practice their faiths in full freedom and security."

On the face of it, the articulated goals are laudable and not at all controversial. The major weakness is in the AJC's and the organization's long history in producing and promoting anti-Muslim discourses i.e. Islamophobia. For a long period of time and through the present, the leadership of the AJC has been peddling anti-Muslim discourses that have contributed to forging of the Islamophobic Social Imaginary in American society. The weekly radio broadcasts by David Harris, the AJC executive director, regularized Islamophobia in civil society by poisoning the airwaves in a sophisticated campaign intended to demonize Muslims in American society. The Muslim Jewish Advisory Council seems to be a partnership built in the swamps of Islamophobia.

Here, I am only focused on the AJC's role in providing a national civil society stage that contributed to the legitimization of the spokespeople and operatives of the Islamophobia industry. Showering awards upon Islamophobes and lavishing praise upon them contributed to the mainstreaming of their ideas and opening access to public policy circles. Certainly, the AJC's link to the Islamophobia industry was motivated by a misguided strategy that viewed anti-Muslim discourses as being beneficial when securing Israel's interest in the U.S.'s rapidly changing political, social and demographic landscape. The AJC's marriage into the Islamophobia industry intended to problematize Muslims as a group, and help push them to the margin of civil society so as not to impact the U.S. alliance and the one-sided commitment to Israel. How did the AJC do this is important to examine and I will turn to few critical examples.

A "must-read" was AJC executive director David Harris' book recommendations for both Daniel Pipes' "Militant Islam Reaches America" and "Jihad in America" by Steve Emerson. The glowing recommendation of the two books written by the masterminds of the Islamophobia industry aired during one of the AJC's weekly radio editorials, Terrorism Experts' Must-Read Books, and carried by some 400 CBS stations and heard by more than 35 million people. According to David Harris and AJC leadership, the "books are factual, sobering, and must-reads. They alert us to dangers here at home we simply cannot afford to ignore"

David Harris recommended another highly racist and Islamophobic book titled, "Londonistan: How Britain is Creating a Terror State Within," which is written by Melanie Phillips, who thinks Obama is "firmly in the Islamist camp" while mounting a defense of Robert Spencer and Pamela Geller, two other masterminds of the Islamophobia industry.

Yet, the more insulting radio broadcast is that which Harris calls on all to read Ayaan Hirsi Ali's book "Infidel." Subsequently, the AJC gave her its Moral Courage Award for this Islamophobic writing. In reality, Ayaan Hirsi Ali is listed by the Southern Poverty Law Center on its Anti-Muslim extremist list, which did not dissuade the AJC from celebrating her Islamophobic credentials.

In 2007, the AJC's radio spot promoted Magdi Allam's book, "Long Live Israel," which in itself is not a problem. However, Magdi is an ex-Muslim convert to Christianity who has said MOSQUES ARE ISLAM'S CANCER and TERROR FACTORIES that must be shut down. After converting to Catholicism, Allam subsequently abandoned the Catholic church because of its soft stance toward Islam. For this, the AJC saw it fit in 2007 to confer onto Mr. Allam the Media award for his book and contribution. In the context of the AJC, David Harris has repeatedly celebrated anti-Muslim extremists in his bi-weekly radio commentaries that are recognized not only by Muslims in the know, but by civil rights groups. It is clear that David Harris promoted Islamophobic literature, and both him and the AJC have not only celebrated Islamophobes, but given them their own awards (Mass Media Award, Moral Courage Award).

One of the goals of The Muslim Jewish Advisory Council is to address anti-Muslim bigotry, and it would be critical for the AJC to make corrective measures to demonstrate its readiness to fundamentally change its character. If the AJC is serious in its attempt to address anti-Muslim bigotry, then let's put actions into published words. Muslims would be interested to see the AJC rescind and withdraw the awards that were lavished to the previously mentioned and other Islamophobes. Indeed, the AJC gave them legitimacy with these awards, and the time has come for an unequivocal disassociation to take place. If not, their words addressing anti-Muslim bigotry stand hollow.

More critically, would the AJC be ready to disassociate itself from individuals, groups, organizations, and foundations that provide funding to the Islamophobia network. The SLPC has a list of Islamophobic individuals and groups that are intertwined with Jewish mainstream organizations, religious institutions and board members, which raises the question if the AJC would take the needed steps to challenge their critical role in fomenting and funding anti-Muslim bigotry.

In addition, if the AJC is serious about its attempt at a partnership with the Muslim community, then an apology is needed for all the Islamophobic content that was pumped into the airwaves over the years. The election results have unleashed an avalanche of Islamophobic, anti-immigrant and anti-Semitic attacks, however the anti-Muslim bigotry utilized by Trump can be traced, at least in part, to the work of the AJC and other pro-Israel groups that felt at ease in using Islamophobia to demonize Muslims, Arabs and Palestinians. Does the AJC's goal of securing Israel's interest in the U.S. override concerns emerging from stoking Islamophobia or is the outreach to the Muslim community represent another layer in the strategy!

Lastly, the anti-Muslim discourses by the AJC has also included constant attacks on progressive Jews who opted out of the constructed hostile binary and extended measurable bounds of friendship, solidarity and alliance to the Muslim, Arab and Palestinian communities. Here, the International Jewish Anti-Zionist Network, Tikkun Magazine and the serious work of Jewish Voice for Peace nationally on Islamophobia many years before the rise of Trump has to be recognized (thousands across the country). The AJC has worked hard to demonize and marginalize the JVP's inclusive Jewish narrative, which helped build real and sustained alliances across the country. If anything, the AJC leadership should apologize to pioneering Jewish voices that never wavered in the face of Islamophobia despite being called "self-hating Jews" by members of the organized Jewish community because they did not see the demonization of Muslims as a valid basis to express support for Israel.

The challenge in confronting Islamophobia is to work toward building real and principled alliances that are rooted in universal justice, equality, freedom and dignity for all. Yes, we are deeply concerned about the rise of Islamophobia and the extreme right in the U.S. but it is not separated from a broader commitment to social justice. Indeed, our efforts directed at countering the pernicious Islamophobic phenomenon should be undertaken with principled alliances and coalitions with leaders and organizations that have a demonstrated past as well as present concern for the well-being of the American Muslim community, AJC fails on both counts.