Islam vs Islam: What is the way forward? 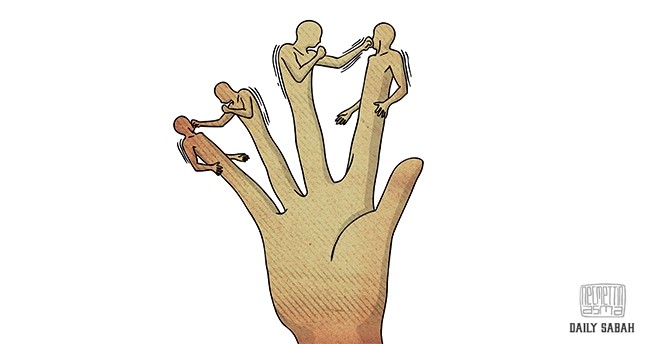 An observer of the unfolding events in the Muslim world will have to conclude that a major conflict is afoot, pitting one interpretation of Islam against another with each claiming to "defend" the true tradition. The intensity of the conflict is getting bloodier by the day and no end is in sight to this calamitous period. Defending Islam is everyone's claim, and the brandished weapons are used to justifying the elimination of the constructed Muslim other in the mind of each Muslim individual, group, sect, state or interpretation. Indeed, the common person needs multiple graduate degrees and 20-plus years of experience just to decipher the range of groups that are claiming this defense of the tradition. Here, the use of the term "tradition" is to be understood in its general connotation and not in any way to construct a binary with modernity or anything else.

I would like to situate the current period by referencing prophetic traditions that should provide a metaphysical grounding for what is being experienced. In a prophetic hadith narrated by Abu Huraira, it is reported that the Prophet Muhammad said, "Time will pass rapidly, good deeds will decrease, miserliness will be thrown (in the hearts of the people), afflictions will appear and there will be much 'al-Harj." They said, "O Allah's Apostle! What is "al-Harj?" He said, "Killing! Killing!" Another prophetic hadith states, "Islam will be fought with Islam." If taken together with the first one, then it can provide a better grounding to the crisis underway.

For sure "al-Harj" is upon us because killing has been normalized as the only "solution" for real or perceived problems. Thus, killing and mayhem is symptomatic of a much deeper and metaphysical affliction that produces the visible destruction. It is important to notice that killing has become normalized around the globe as if humanity has entered into a death wish tunnel with leaders and followers justifying the elimination of the other, whether near or far. I don't want to insinuate a Muslim pathology since the killing crisis is readily documentable in the U.S. with some 32,000 murders every year — which means the problem is a global one — and the focus of this piece is the Muslim world. More importantly, killing has been normalized for a long time as the industrial revolution has mechanized the process and made it more efficient. Certainly, we can recall killing being normalized during the conquest of the Americas, the colonial era, the slavery period, WWI and WWII, but it seems that humanity has not progressed or achieved a deeper level of wisdom.

Islam versus Islam makes it possible to bring an industrial level of "al-Harj" mass killing into debates and interpretations disputes that should have been dealt with in scholarly essays and properly organized symposia. When text is used as a weapon then heedless killing is the outcome. The prophet directed his speech to the Muslim community because they needed to be aware of the consequences of such an approach, considering the stern warnings in the Quran and Hadiths. Certainly, the issue is not to have a differing opinion but how open or intellectually mature the person is so as to consider the viability of a contrary viewpoint and be able to follow its logical argument for no other reason than intellectual and joyful curiosity. Text by its nature is complex and contains an ocean of meaning even when we think of it as simple, direct and categorical in nature.

Difference of opinion does not mean and should not translate to splits and conflicts in the community since core belief issues are rarely in question, but often the tangential and obscure is used to drive disputes. More to the point, the raging sectarian conflicts are rooted in attempts to force uniformity on issues of history, theology and texts that don't lend themselves to a singular and, for sure, simple interpretations. In this context, resorting to killing one's opponent becomes the only way to win the argument and produce the desired uniformity of opinion, but this outcome does not last since at the essence of humanness is the constant proclivity to produce difference. The wise welcome this difference as a divine blessing and a sign pointing to the One, while the ignorant out of pure shallowness will force uniformity and singularity through use of a killing machines.

In the contemporary period, the problems are far more complex and the ability to access the kernels in the texts is an even more daunting task. The complexity is daunting when Islam becomes part of an identity formation and a response to the disorientation of the nation-state on the one hand and the fast-moving contemporary world. Accordingly, Islam, tradition, text and interpretation take on a different lens altogether because the quest in here is not the Truth and the purpose of being; rather it is the search to find the lost and disoriented self in a perceived spiritual project that was reduced to its material representation.

I will not offer my own interpretation to win an argument and assert that my own defense of Islam, text and the tradition is the only valid one, which is the case for me but that is not the point. The challenge is to be able to recognize the validity of another individual being able to hold a contrary or wrong interpretation and finding ways to agree to disagree while working collectively to address the common problems. Difference of opinion and divergent interpretation is not a sign of weakness but a source of strength and mercy to the community because it opens multiple vistas to solve conceptually different problems. Islamic text and guidance contained therein is singular, but understanding it by necessity after the prophet's own time is multiple, complex and divergent.

The questions and challenges facing the Muslim world are many and the responses and understandings must be diverse so as to address them accordingly. Having a differing point of view should be grounded in mercy rather than in an absolutist and survival of the fittest type of logic that should be seen and treated as calamity to the contemporary Muslim world. Islam versus Islam produces a dead-end Islam since the victory of one type of Islam is contingent on the loss or total elimination of another interpretation of Islam. Here, I am not defending or arguing that all interpretations deserve to be acted upon, which would be an absurd proposition on my part. What I am calling for is an open and sincere approach to resolving divergent views of what Islam is and what are we called upon to do in this world.

I for one embrace the Quranic call to be a witness for God, uphold justice, manifest perfection of goodness, attend to the bounds of lineage (for me it includes all humanity), uphold the dignity of every human being, share the blessings with the poor and the less fortunate, act as a proper custodian and trustee of mother earth and every living nation in it (this include animals, birds, ants, trees, etc.), and oppose oppression in all its forms including oppressing my own self first and foremost. It is reported in the Hadith Qudsi that God has said, ""O My servants! I have forbidden oppression for Myself, and I have made it forbidden amongst you, so do not oppress one another." As such, I hold that oppression is not divine and directly comes out of our desire to devour the world. I embrace Islam's ethical canopy that is ontologically anchored in mercy. "Be merciful to the people of the earth and the One in the heavens will have mercy upon you."
Last Update: Mar 21, 2017 2:21 pm
RELATED TOPICS