Trump, Islamophobia and the new McCarthyism 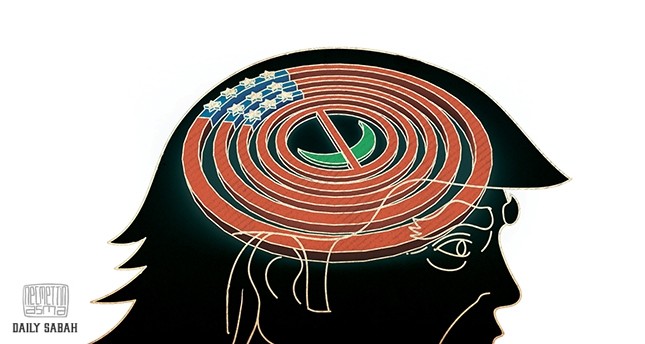 Trump's Islamopohic cadres and the clash-of-civilization advocates are following the footsteps of Senator McCarthy by using his infamous witch hunt method, but this time the target is not the liberal class but Muslim individuals and groups in the U.S.

A purported secret document is being used by the Islamophobes, alt-right operatives, and the Israel and Arab lobbyists to push for a presidential executive order that would designate the Muslim Brotherhood movement as a terrorist organization. In fact, successive Republican and Democratic U.S. administrations have investigated the Muslim Brotherhood movement and reached the conclusion that the group does not actually engage in terrorist activities and has maintained its commitment to non-violence in pursuit of political engagement. One can debate whether the Muslim Brotherhood's engagement in politics is a good or bad thing, critique their social agenda, neoliberal economic vision and opposition to Israeli and U.S. policies in the region, but none of these items can justify the terrorist label being sought.

Each involved state or non-state is pressing for this label from narrow self-interests and is using the current U.S. administration as a tool in their strategy. With this I am not implying that the U.S. is without interests of its own in the current regional alignment, far from it. The U.S. has played a very pernicious role in the ongoing Sunni versus Sunni "low-intensity warfare" focused on fomenting and exaggerating conflicts between various Muslim groupings in order to establish who would best represent an accommodationist Islamic worldview in the region vis-à-vis foreign imperial interests. Rest assured that the one the U.S. finds will be determined by alignment with its economic and political interests in the region. On the one hand, the U.S. and its allies have played a complex and dirty game in fueling and intensifying the Sunni-Shiite conflicts and have been utilizing this bloody confrontation to cement and foster a more militarized and interventionist foreign policy in the region and across the globe.

But what can we say about the Islamophobes and their frothing at the mouth over this possible label? Critically, the Islamophobes and clash-of-civilization advocates see Muslims as a threat to their distorted and demented worldview, which is founded upon a mixture of conspiracy theories and an imagined and ignorant re-reading of the past. The groups and individuals that make up the Islamophobic industry have worked tirelessly to demonize Islam and Muslims, and Trump's possible executive order will be a sweet triumph for their diligent racism and bigotry. The purported Muslim Brotherhood secret document is used as evidence of a conspiracy to undermine and take over America. It is important to remember that the Islamophobic cabal behind this move likewise joined in in attacking Barack Obama for supposed ties to the Muslim Brotherhood and were key activists in the Birther movement. The document is entered as exhibit A for the existence of a deep Islamic conspiracy to take over America and this populist message fueled the anger and delegitimization of President Obama. These are the same individuals and groups that targeted Obama for his Muslimness and insinuated a connection to the Muslim Brotherhood. "Taking our country back" has to be understood within the racist and Islamophobic current that brought Trump into the White House.

Why would Islamophobes seek such a decision is an important question to turn our attention to. Islamophobes used the secret document to argue for the existence of a plan that supposedly connects all major Muslim American organizations in an effort to undermine America's power from the inside and then undertake an Islamic takeover. Here, we see the foxiness of Islamophobes who are masquerading and dressing up their cruel and ugly racism with the garb of patriotism and national defense. Wrongly setting up such labels against Muslim groups will form the basis for the new McCarthyism and will unleash systematic targeting of Muslim groups and individuals.

Consequently, this label will make it possible to attack all American Muslim organizations in one swoop by asserting a connection to the Muslim Brotherhood movement. Once the claim is made, it would be much easier to push most if not all these organizations out of civil society and limit their access to policy making circles. In addition, this terrorist label will provide Islamophobes with a new legitimacy to once again serve as the go to "experts" on everything Islam-related in policy-making circles, after serving only as behind the scene conduits for information and "research" to Congressional hearings.

Another set of interests behind the push for this executive order is held by Egypt and other Arab Gulf States, who view this terrorism label as a tool that can be used as a deadly weapon to further eliminate internal opposition and consolidate domestic power. It is not a secret that since the initial period of the "Arab Spring" that witnessed the overthrow of a few dictators, Arab monarchies and other long ruling elites targeted the Muslim Brotherhood movement because it was the best organized and the only real contender for power in post-revolutionary Egypt and Tunisia as well as being the main actor in the push for reforms in Yemen. The campaigns against the Muslim Brotherhood in all these countries were funded heavily by Gulf States, who also funded and nurtured alterative Islamic groups to counter the grassroots movement and undermine their Islamic credentials. Existing theological and legalistic principles within the global Islamic community were utilized and magnified to drive this strategy. This is a very complex topic that needs its own article, but Egypt and some Gulf States are pursuing the U.S. decision as a legitimizing tool to shore-up failed policies and dead-end visions for the future.

Likewise, we find a persistent engagement from pro-Israel think tanks and "anti-terrorism experts" in the demonization of the Muslim Brotherhood movement. Israel has shifted its focus away from Arab nationalist threats to Islamic threats in the mid-90s, which contributed to a steady stream of demonization and bigotry directed at Muslim groups and individuals including first and foremost the Muslim Brotherhood movement. Israel's demonization of the Muslim Brotherhood has been in play since the founding of the country in 1948 because the organization took an active role in resisting Zionism and mobilizing popular opposition to it. In the current context, Israel's interest in this decision rests in maintaining the pressure on Hamas, which is already included on the state department list of terrorists, but more importantly this would provide further tools to prevent or continue to frustrate a possible Palestinian unity government.

Right now it is critical to recall that the Muslim Brotherhood movement is well known to Washington policy makers and strategists, and this makes the designation regarding previous events a little complicated. Indeed, the U.S. government worked and recruited the Muslim Brotherhood movement and many other Islamic sects and groups during the Cold War to confront communism. Thus, the U.S. itself had a great role in publicizing and promoting particular Islamic worldviews that played a critical part in challenging communist and socialist-oriented post-colonial leaders and political parties across the Arab and Muslim worlds. The example of Egypt is illustrative, as the U.S. worked with Gulf States in the 1960s and other monarchies to support the Muslim Brotherhood movement to derail and prevent Nasser's Arab socialist program in the post 1953 Free Officers Revolution.

Another example of this strategy was the recruitment of all Muslim religious and political trends into the war effort against the Russians in Afghanistan and during the Iran-Iraq conflict. Here, one has to say that the modern intensification of violent trends in the Arab and Muslim world have to be traced to the dual strategy of confronting the socialists on the one hand and the success of the Iranian Revolution on the other. All Islamic Sunni trends and groups, including the Muslim Brotherhood, the Wahhabi Movement and Sufi groups, were drawn into this confrontation. The global Jihad movement was born during the Cold War and was part of the tools chest in the superpowers confrontation.

The proposed terrorist labeling boils down to an attempt to criminalize a set of related ideas and beliefs that are connected to a group that came into existence in 1928. The Muslim Brotherhood is an outspoken promoter of a political system in Muslim-majority countries based on modern interpretations of classical texts. The notion of political Islam and its role in the modern state is what the Islamophobes, some Arab countries and clash-of-civilization advocates oppose. Yet, this labeling is more about targeting Muslim groups in the West and not in Muslim-majority countries. Again, the debate on the viability or desirability of a political program sponsored by the Muslim Brotherhood is not the same as labeling them a terrorist group, which would be a major mistake if it is allowed to occur.

Certainly, the Islamophobes are the real inheritors of Senator McCarthy, since their goal is to pursue other Americans under a dubious plan. Once this labeling is logged into the books, the real McCarthyism witch-hunt against American Muslim individuals and groups will be unleashed. Islamophobes are pushing for a modern style political and religious inquisition in the same way that Senator McCarthy used the hearing to punish and torment the liberal class, and preside over a reign of political terror in the country.
Last Update: Mar 21, 2017 2:20 pm
RELATED TOPICS