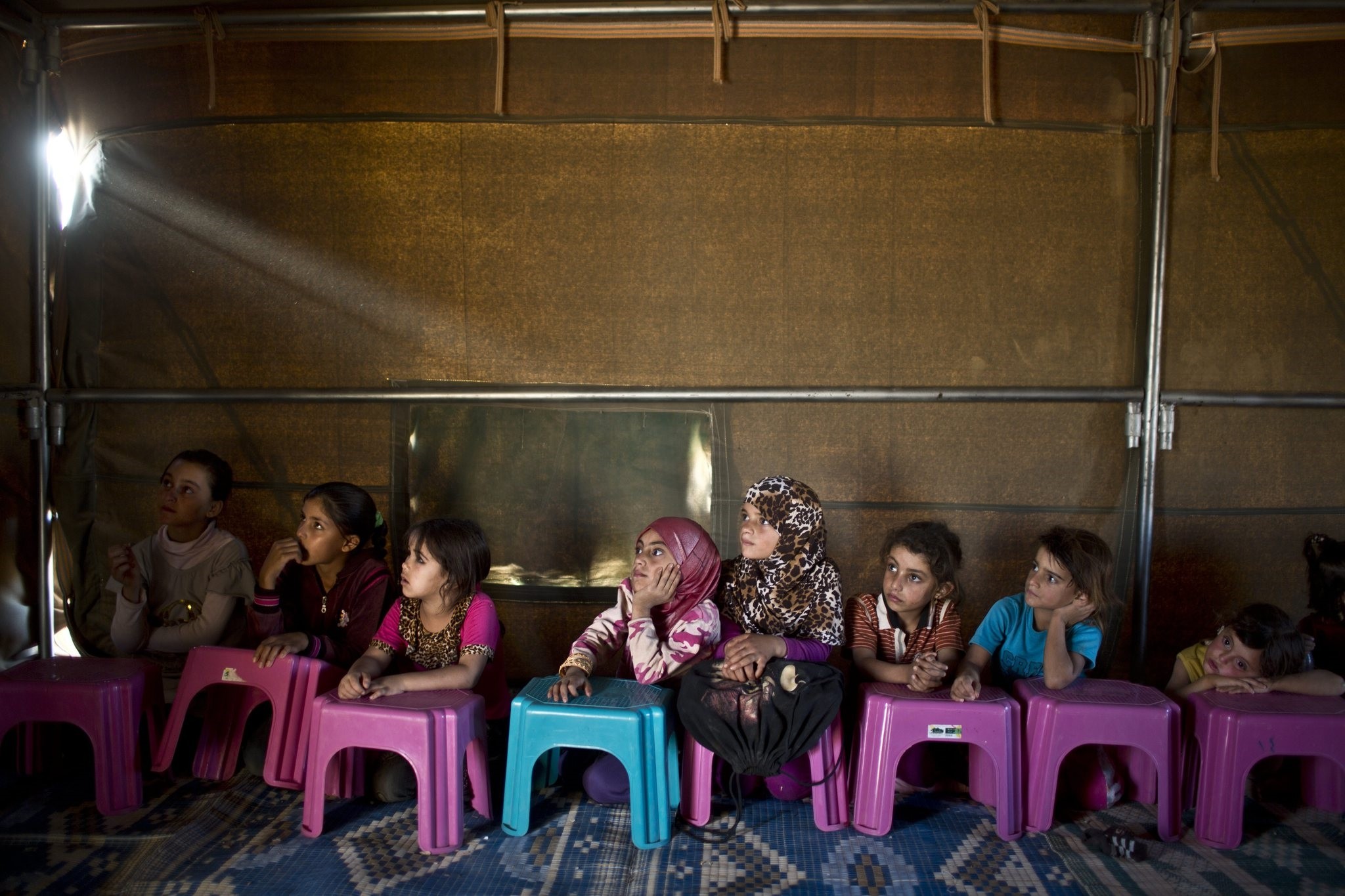 Syrian refugee children attending a class at a makeshift school set up in a tent at an informal tented settlement near the Syrian border on the outskirts of Mafraq, Jordan, Oct. 21, 2015. (AP Photo)
by Hatem Bazian May 13, 2017 12:00 am

We should act with urgency to construct a robust infrastructure that can provide education to the largest number of refugees possible, both for Syrians and other displaced groups around the world

In the 1980s when I was an undergraduate student at San Francisco State University, I had the opportunity to meet and talk with refugees from El Salvador, Columbia and Nicaragua, who were part of the campus community. At the time, the civil wars and Cold War proxy-regional conflicts had led many civilians to flee the violence and make it all the way to San Francisco, California. One of the refugees that I met at the time already had an advanced college degree but the lack of fluency in English was a barrier preventing him from entering the work force, forcing him to take a job as a janitor to care for his family.

Refugees face multifold predicaments and challenges that take generations to overcome, and it is doubtful that a sense of normalcy can ever be achieved for those impacted. For a person with an advanced college education to take on such a low-paying job points to the existing structural barriers that are rarely addressed when discussing how best to help refugees around the world.

The modern casualties of warfare are overwhelmingly civilian and the impacts are often generational but war planners regularly ignore this fact. In each war, the civilian population gets caught in the middle and only the lucky few manage to escape harm's way. Even they, though, become either internal or externally displaced refugees, which is the real devastating consequence of modern warfare. This does not imply that pre-modern conflicts were not as bloody or devastating - they were - but the level of destruction visited upon civilian populations and urban centers pale in comparison to what the modern industrialized era has produced.

Often, the civilian population in urban centers are included in the list of targets that are identified by the conflicting parties. Indeed, plans of attack in modern warfare include the electricity grid and sub-stations, transportations systems and bridges, water and food supplies as well as civilian communication networks, while the outcome usually includes the disruption of the daily lives of civilian populations. Precisely this systematic targeting, which is part of modern warfare, that results in destroying the civilian fabric of society at the time of war leads to displacement and the influx of refugees. The professional and educated core that upkeeps and attends to the needs of the society become a primary victim of modern warfare and subject to the systematic targeting of the safety net that upholds the society.

Certainly, Palestinian, Syrian and Afghan refugees did not want to leave their land, their homes or their countries but war and violence are the causes of their displacement. The ranks of the refugees swell with farmers, factory workers, doctors, lawyers, teachers and layers of the professional class since the collapse of civil society makes it impossible to operate in a rapidly shifting terrain. Safety and security are the bedrock for a sustainable civil society, and when this is lost, then the rational and most logical action is to seek refuge in a place where one can find it for him/herself as well as for family members.

Becoming a refugee is the first step in a long, painful process of erasure of the past and re-writing a new chapter that often is totally opposite what was present or accustomed to back in their homeland. The work-related background of a teacher, lawyer, doctor or a farmer is no longer relevant when one's identity becomes framed with a U.N. given number, a tent location and a contested and measured food allotment. Restrictions on movement, barbed wire and walls of a refugee camp become the horizons through which identity is defined and the future is shaped. A person is transformed into an "ignorant" subject because he/she is not equipped in the refugee-receiving country and a new road toward literacy begins, despite possibly possessing a higher degree than the educators in the camps.

Syrian refugees, like 65 million other refugees around the world, are dealing with the deep wounds and consequences of displacement, which are not limited to leaving their homes and lands but also include facing the narrowing of their future horizons. Access to education is difficult in normal circumstances with tuition increases and limits on availability becoming the norm, but for refugees, who face an uphill struggle to make ends meet, education becomes an untenable pipe dream. It is not surprising that a refugee family might need 10-20 years just to get some stability, including access to education.

From all the possible aid extended to refugees, an investment in education would be the best and provide the most impact for the long-term development and well-being of those displaced. In the case of the Syrian refugees, the focus should rapidly shift from basic needs to long-term development, which should start by exploring innovative ways to provide education, with an extensive emphasis on higher education. More broadly, investment in education would make it possible to re-tool the existing professional and educated segment of the refugee community that can then begin assisting the 4-to-6 million external refugees and 5-to-6 internally displaced ones. A daunting task awaits everyone in the months or years following the end of the civil and regional wars: The process of rebuilding torn countries and a totally destroyed professional and educated population.

The challenge belongs to all institutions of higher education around the world to find ways to lend a hand in the building process. Innovations must be found to address the cost, access, curriculum needs and distance that separate institutions of higher learning around the world from the bulk of refugees around Syria's boarders and inside the country. We should act with urgency to construct a robust infrastructure that can provide education to the largest number of refugees possible, both for Syrians and other displaced groups around the world.

The global community is quick to provide emergency relief but fails in constructing long-term and sustainable models to support and alleviate refugees protracted conditions. Setting aside the rising tide of xenophobia and anti-refugee sentiments in Europe for a moment, the reality is that the overwhelming majority of refugees are still present in close proximity to their homelands and countries, and if given the choice, will want to return to their homes, towns, schools and jobs. This means that relief efforts should give way to supporting medium-to-long-range development projects with an eye toward a return to their homes and lands in the future. What is needed is a renewed commitment to structural and sustained solutions, which is best addressed through education.

A global plan for refugee empowerment and transformation centered on institutions of higher learning should take shape so as to formulate long-term solutions to the human crisis at hand. The Turkish model for Syrian refugees and the setting up of educational institutions is a model that must be emulated and expanded. Through setting up of schools and universities that are staffed by the refugees themselves, a major step is undertaken to prepare for the next stage in addressing the crisis of the Syrian refugee population. What is missing is heavy involvement of universities and educational institutions in the West, who continue to frame the problem as one of relief and security, and lacks an emphasis on sustainable development.

Educational institutions around the world can institute programs that allow refugees to enroll in language courses, degree-granting and equalizing classes so as to enable them to move toward stability and empowerment. I am calling for the institutionalization of an international refugee educational consortium that can help develop curriculum and formalize the disconnected array of programs that are run on a local or national basis. The structure, plans, resources and institutions need to be worked out but the focus and the infrastructure should be driven by local needs and specific circumstances. Education is the foundation for transforming human misery into sustainable development and renewal.