When racism disrupts the 'normal' and 'peaceful' America! 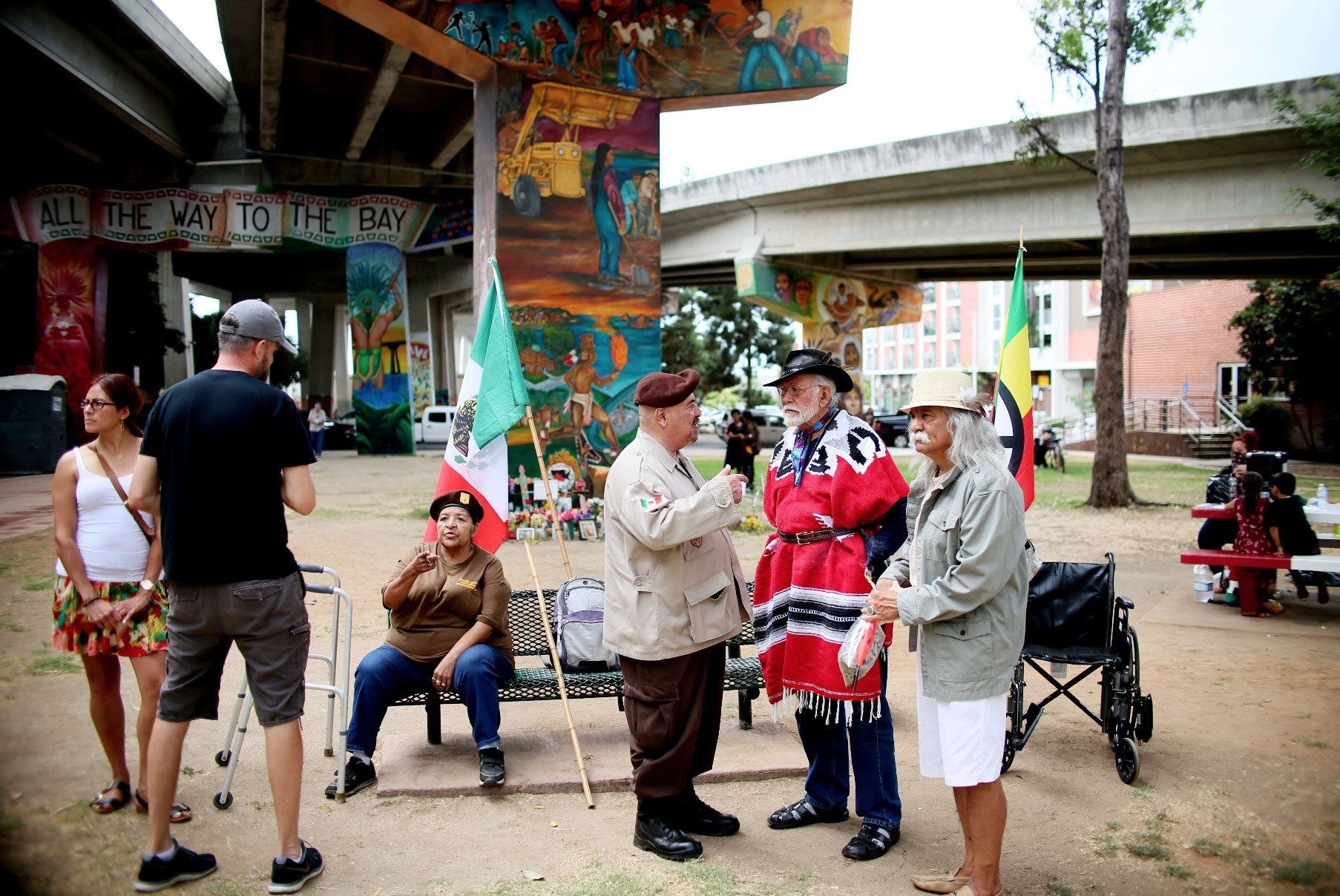 Protesters seen during a solidarity rally against white supremacist groups at Chicano Park in San Diego, California, Sept. 3.
by Hatem Bazian Sep 05, 2017 12:00 am

The U.S. should uplift and help those less fortunate in society and provide a safety net to those who are left behind due to a variety of economic, social and political causes

America's entanglement with race is the present absent moral river steadily flowing underneath the nation's feet, but no one is ready to dig below the surface until it bursts in the open to disrupt the "normal" and otherwise "peaceful" daily life routines. "Normal" means that race is not a topic of conversation or a factor to consider in the political, social, economic, and religious order. "Normal" means African Americans and communities of color are shot and killed with no serious investigation or response and are then blamed for it. "Normal" means African Americans and minorities know their place in society and keep to it, so as not to alter the layered and carefully structured civil society. "Normal" is to act-out on one's own dehumanization in the hope of being included in the society's structural exclusion of who you are as an African American or a person of color. "Normal" is seeking to humanize the human, a dehumanizing act.

"Peaceful" is another term calling for clarification – it refers to the absence of disruption in the "society's" sense of normal centered on the un-normalness of the status and conditions of African American and communities of color. "Peaceful" means that the pain and suffering of African Americans and communities of color goes unnoticed, unreported and totally rationalized as "cultural" or, more accurately, because of their race – the inferior and the sub-human. "Peaceful" means African Americans and people of color bodies are made motionless through violence, but no one cares or has empathy for the daily body count, which is insultingly called black on black violence or some other dehumanizing drivel masquerading as a "legitimate point" to explain the deep suffering at hand. "Peaceful" means the victim is victimized once more by ascribing the cause of harm to something that is inherent in the character or the racial identity of the person/s being victimized.

When race bursts into the open to disrupt the "normal" and "peaceful," we are first shocked about what happened, and then everyone is ready to speak on how non-existent, mistaken, and misplaced the emphasis on this constructed race issue is. Everyone comes on TV to say how racism does not exist and there is another issue altogether at work. Talking heads come out of the woodwork to inform everyone how race is a socially constructed category, how much progress we have made and how the real issue is the victimization attitudes that are keeping African Americans and people of color from moving forward. If they would just let this race thing go, then we could go back to further building the "normal" and "peaceful" society that we have been developing until it was disrupted by the misguided, unsophisticated and indeed violent actions of African Americans and communities of color that came out to the streets.

It is when the "normal" and "peaceful" get punctured MLK's "I have a dream" gets air time, replayed and quoted non-stop, to imply the arrival – if not already the passing – of the hoped for society referenced in the famous March on Washington speech. Are we a color or race blind society? Does someone's skin color impact their economic and social standing? What is the criterion by which to measure the progress in confronting race and racism in society? Who should determine this arrival at a racism-free society point, assuming it is a possibility under the current opposition to any real attempt at fundamentally confronting the race issue?

America carries the moral burden of history on its shoulders, and race and racism are the water mixed with mortar that formed the building bricks for the political, social, economic and religious order we inhabit. At times, people confuse different categories when attempting to speak about race and racism, which leads to further difficulties in approaching the subject. Often, mere attitudes of discrimination are used to define race and racism, which is actually a marker rather than the actual definition. Indeed, this focus on the marker leads to simplistic arguments that every human group engages in racism and at a certain level consider themselves better than others outside their group. In this context, discrimination is a universal phenomenon and few are shielded from it. However, discrimination is not the same as race or the construction of racial categories, since the former is an outcome or a marker of the latter. Does race exist? How do we define and engage in a serious, sustained discussion about it? More importantly, how race factors into our political, social, economic and religious order is the starting points before we substitute a racial category in place of another to claim the lack of existence of race, racism and the made invisible suffering of African Americans and minorities. The starting point is to define the meaning of the categories we use and then undertake a systematic process to navigate a forward movement to build a more perfect union.

I am writing about the race issue again because of the increased tensions in today's America. The increasing polarization is a direct outcome of the political process that is witnessing a sustained effort at rolling back the gains of the civil rights movement of the 1960s. The Civil Rights Act, Immigration Rights Act and the Voting Rights Act are the three pillars around which a societal compromise was reached in the 1960s in the hope of transforming Jim Crow's America into a more perfect union. In response to these three-major legislations, Southern Democrats abandoned the Democratic Party and shifted into the Republican fold and a new campaign to "take our country back" was afoot (No Democrat has won the majority of white votes since the 1964 presidential elections). The assault on the Civil Rights Movement's gains started in the late 1960s, with the first challenge to Affirmative Action coming as early as 1968 and 10 years later the U.S. Supreme Court handed the Bakke decision that narrowed the scope of its use in college admission.

Indeed, the Bakke decision from June 28, 1978 should be considered as the official end of the civil rights compromise, which means the remedy to structural exclusion lasted a mere 14 years before it was heavily curtailed. While at the time, the U.S. Supreme Court ruled that affirmative action is constitutional, nevertheless it struck down the important tool of quotas. The Bakke case began at the Davis Medical School of the University of California, which, at the time, "had reserved 16 percent of its admission places for minority applicants." What this means is that 84 percent of the medical school's seats were wide open to everyone and the 16 percent had been set aside to open opportunities to African Americans and other minorities who have been excluded from admission for generations, while paying taxes to support the establishment of California's higher education system. The stoking of White resentment did not start with Trump – it had been present throughout the period of the Civil Rights Movement and all the way to the present.

The suffering of Whites and lack of economic and educational opportunities were the same themes that confronted MLK and civil rights advocates in the 1960s and 70s. While organizing activities in defense of the educational access for African Americans and minorities at UC Berkeley in the early 1990s, I was confronted with the same arguments from poor and working class whites in even more dire conditions that needed opportunities in the same way as the minorities. Here, I agreed on the over-all principle of needing to help everyone and advocate access for all, but at the same time I asserted the need to remedy cumulative and generational exclusions that disproportionality impacts African Americans and minorities. It is not surprising to see the Trump administration going back to the same tool kit by targeting the Affirmative Action in college admission in a way to further consolidate the assault on civil rights gains from the 1960s.

We can see this strategy on TV shows, as the arguments around the rise of the Altright, KKK and Neo-Nazis are immediately shifted to a discussion of the economic disparities and poverty faced by whites in America, and the issue is not about African Americans or race! Here, we have the immediate shift into white suffering, itself a racial category, while denying the existence of racial categories in society altogether, a sophisticated process for mainly silencing the suffering and experience of African Americans in particular. Stating that African Americans experience racism does not mean that whites don't experience poverty or economic, political and social marginalization, they certainly do, but the topic is always inserted as a counter thesis to raising the question of race and black suffering.

Economic problems and dislocation affects all middle class and poor Americans, but, within this broad statement, some suffer more than others. It is a certainty that when the economy is good African Americans, Native Americans, Latinos and some segments of the Asian American community are the last to benefit, and when a recession or depression hits then they are blamed for being dependent on social welfare or government handouts. Mind you, on a pure numerical basis and as a percentage, whites access social welfare benefits more than communities of color, and immigrants but they are never stigmatized for it. The state should uplift and help those less fortunate in the society and provide a safety net to those who are left behind due to a variety of economic, social and political causes - building institutions that can attend to the weak and vulnerable is what makes us human and civilized.