Trump wagging the dog on Jerusalem 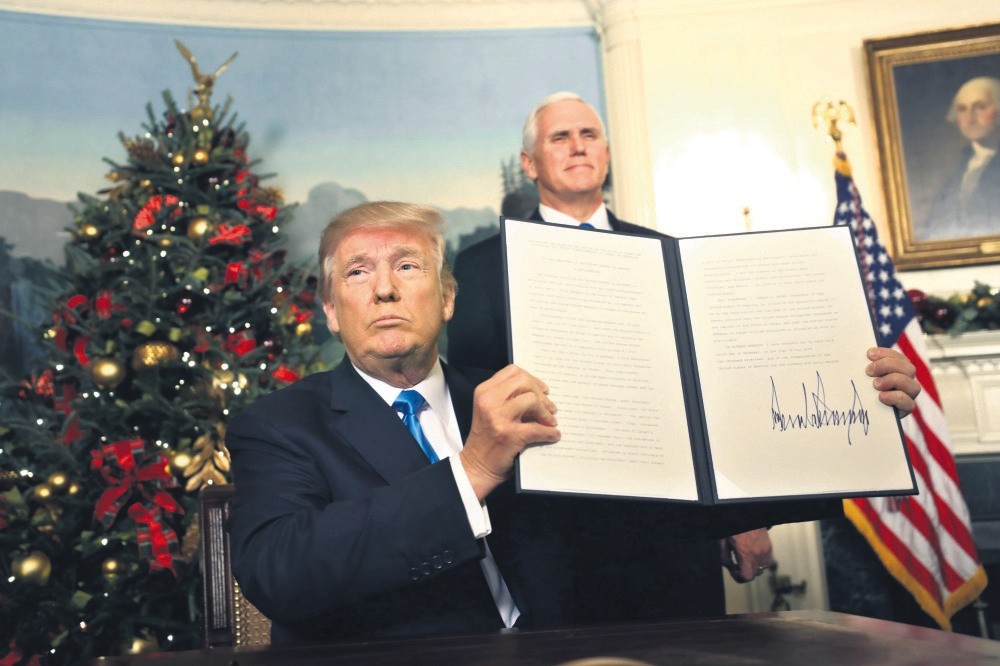 U.S. Vice President Mike Pence (R) watches as President Trump holds up his proclamation about his controversialdecision to recognize Jerusalem as the capital of Israel, at the White House, Washington, Dec. 6.
by Hatem Bazian
Dec 12, 2017 12:00 am

The U.S. recognition of Jerusalem should awaken anyone from their induced 'peace process' and 'honest broker' slumber and delusions that Zionism and its benefactors have any interest in justice, peace or dignity for Palestinians

Donald Trump's policy grenade, the recognition of Jerusalem as the capital of Israel and the decision to transfer the U.S. Embassy to the occupied city should be added to America's three decades or longer disaster called the "Middle East peace process." Observers of the U.S.'s Middle East policy understand that it has been shaped by two-pronged interests. On the one hand, the steady access and domination of the oil markets, and on the other, protecting and expanding Israel's hegemonic power in the region.

The role of the U.S. as a superpower meant a constant balancing act between competing domestic and global interests that often intersected across economic, political, ethnic and religious lines. In the context of Palestine, all these elements have often acted together to shape and impact successive U.S. administration policies. However, a few factors have come together that fused U.S.'s domestic political and regional alignments that paved the way for this policy shift. What are the factors that made this shift possible? Here, we are assuming Trump's decision was taken after careful consideration of the policy. This does not seem to be the case, but we should not let this be the only way to examine the decision.

Before delving deeper into Trump's shift in policy, I must remind everyone that the U.S.'s political elites represented by both Democrats and Republicans are firmly aligned with Israeli interests and have regularly expressed support for such a move. The standing law adopted by both the House and Senate demanded the recognition of Jerusalem as the capital of Israel and ordered the transfer of the U.S. Embassy to the occupied city, while granting the president and state Department the ability to seek a waiver every six months to delay the move. Thus, Trump opted not to go through the existing double speak door that allowed successive U.S. presidents to speak from both sides of their mouths, with one side being reserved for domestic lobby groups that promotes Israel's interests, while the other is directed at regional and international actors.

Here, Trump's policy announcement collapses the double speak and the inherent duplicity that has been the hallmark of U.S.'s diplomacy when dealing with Palestine and the rights of the Palestinians.

The duplicity in America's treatment of the Palestine file is as old as the Balfour Declaration of 1917, in which President Wilson's call for self-determination was directly contradicted by supporting the ill-fated British document that set Palestine up for the Zionist settler colonial project. The past is with us and is never really the past since it continues to unfold and impact the lives of Palestinians daily. Successive U.S. presidents, secretaries of state and special envoys have taken duplicity towards Palestine as a professional oath of office, whereby the engagement or "peace" plans are all constituted to protect and expand Israel's colonial interests at the expense of the Palestinians. A cursory reading of all proposals issued by successive U.S. administrations from the time of Woodrow Wilson all the way to Trump's own announcement illustrates the mere fact that the Palestinians were doubly victimized by policies and proposals that reward, protect and arm the occupying power.

Trump's political grenade was domestically weaponized and reflects the electoral forces that carried him to office in the 2016 elections. At the same time, both parties have prepared the ground for this decision over a long period of time. Indeed, the Democratic Party was itself under strict direction from the then Hillary Clinton campaign that the Platform Drafting Committee resists removing the language on the moving of the embassy, which is something that Bernie Sanders' camp was seeking. The evangelical base went strongly for Trump in 2016, and top right wing American Zionists likewise aligned themselves with the Republican candidate, including Sheldon Adelson, the top donor to Trump's campaign with $35 million. Adelson has been a major player in the U.S. political field and laser focused on promoting and expanding Israel's right-wing government policies and interests, with the embassy move being a top item on his candidate's shopping list.

Critically, Trump's impulsive, undisciplined and unorthodox leadership style has to be taken into consideration. Trump's style is reactive and news cycle driven, which means that one has to look at the various issues at hand and what are the events or narrative that he is attempting to change. On the same day that Trump made the announcement about Jerusalem, his son, Donald Trump Jr., was facing eight hours of closed-door testimony in the House Intelligence Committee responsible for examining the claims of collusion with Russia. Whether a link to this can be established is not clear, but diversion strategies are a hallmark of this reality TV president who understands the power of changing the headlines and driving the narrative. More importantly, the national media is being dominated by the sexual harassment narrative, which also impacts Alabama's important senate contest, with Roy Moore hanging on by a thin thread. During this past week, President Trump took to Twitter to issue an official endorsement to the embattled Republican. "We need his vote on stopping crime, illegal immigration, Border Wall, Military, Pro Life, V.A., Judges, 2nd Amendment and more," Trump wrote. "No to Jones, a Pelosi/Schumer Puppet!"

All politics is local, and Trump's actions are motivated by a calculation for the 2018 midterm elections and setting the stage for a rerun in 2020. Palestine is an acceptable price to be paid to line-up the evangelical base, top pro-Israel donors and to appear to be a decisive leader when compared to Barack Obama, George W. Bush, Bill Clinton and other presidents who did not walk the talk on moving the embassy and recognize Jerusalem as the capital. Democrats are out of options and are stuck with this one since their top leadership and operatives are supportive of this move, even though they might question the timing or wisdom of it. Trump is calling the bluff of Hillary Clinton, Nancy Pelosi, Chuck Schumer and Dianne Feinstein on this one, as they supported moving the embassy legislation and are connected by the hip to the pro-Israel lobby infrastructure in the U.S. Here, we should wait and see if Trump's decision will shift more of the organized pro-Israel forces into his electoral column and thus deprive the Democratic party of a solid base of support in upcoming electoral contests.

On the regional stage, Trump's decision is without any real costs since the Arab and Muslim world leadership is heavily fragmented and, for the most part, has aligned itself with Israel's strategic priorities. Currently, the Arab world's (with some exceptions) political priorities are focused on "confronting" Iran and deeming it an existential threat to the existing regional order. The current confrontation is being waged in Iraq, Syria, Yemen, Bahrain and Lebanon and is a secondary stimulus behind the attempted isolation of Qatar. Furthermore, since the success of the counter-revolutions after the Arab Spring, the current crop of leaders in the region utilized Israel's close relations with the Western states to divert/prevent any criticism of their draconian policies toward their populations (assuming that Western leaders were actually interested in a different course of action, which is not the case). The Arab and Muslim world order has dispensed with Palestine and the Palestinians in favor of protecting their individual seats of power in exchange for supporting Israel's strategic priorities focused on containing Iran and securing its borders.

Don't pay much attention to statements coming from the region; actions speak louder than words. No country in the region will cut diplomatic ties with Israel, suspend strategic cooperation and end economic penetration of Arab and Muslim markets. These are the policy responses that should come from some 55 majority nations that can mobilize to counter the U.S.'s policy on Jerusalem, but don't hold your breath for any of this to happen, as calls will be made to the Palestinians to be careful, rational and "trust" the "peace process" that will bring a two-state solution. Indeed, the "peace process" is the new sacred altar through which settler colonialism, dispossession, human rights violations and Apartheid are absolved and washed away. These statements must be followed by action. One such action would be to have Arab and Muslim states adopt domestic laws and formulate policies that would allow for legally pursuing Israeli companies that are benefiting from stolen and confiscated properties, including those in occupied Jerusalem.

Finally, the Palestinian Authority has participated and acted as a sub-contractor for Israel's occupation since the signing of the Oslo agreement. Securing the colonial settlers and settlements at the expense of the occupied Palestinian population, while negotiating for individual and narrow economic and political privileges is the real calamity of the Oslo framework. Creating a Palestinian elite with interests connected to Israel has been a major success of Oslo, and forging the golden cage through the Palestinian Authority renders it impotent in countering Israel's regional and global strategic moves. Here, I am not in the business of scoring points, I only want to address the real development that transformed Palestinians in the territories into employees of Israel's colonial enterprise, creating a struggle about salaries and privileges accorded by the occupiers and their main ally, the United States. What is the PA's strategy at this time? Who will lead it? Will the PA immediately stop security coordination with the Israeli army? Will the PA release Palestinian political prisoners held at the demand of Israel and the U.S.? How will relations with the Arab world be any different, considering that many countries in this world are traveling on Israel's strategic train and seeking a war with Iran? What is the PA's strategy on the war crimes file at the International Court of Justice (ICJ) from the successive Gaza attacks? Will the PA (or the Palestine Liberation Organization for that matter) undertake an international campaign to really and effectively support grassroots work on the Boycott, Divestment and Sanctions (BDS) rather than the constant attempt at isolating these efforts while encouraging normalizations efforts across the globe?

What is certain today, as it has been the case all along, since prior to 1917, is that Zionism and the state it founded is an exclusivist, expansionist and violent political settler colonial hegemonic project that was supported by the major powers and is set in the region at the expense of the indigenous Palestinian population. Zionism was a colonial child of Great Britain, part of the design to dismantle the "Sick Man of Europe," the Ottoman state, and to divide the territories among the French and British, while creating a buffer region to protect the Suez Canal. We are living the outcome of WWI, the Balfour Declaration and the Sykes-Picot agreement, but with a new sponsoring power to help construct the Iron Wall. The U.S. recognition of Jerusalem on the eve of the 100th year anniversary of WWI and the Balfour Declaration should awaken anyone from their induced "peace process" and "honest broker" slumber and delusions that Zionism and its benefactors have any interest in justice, peace or dignity for the Palestinians. The sooner this basic fact is understood, the faster we can begin to challenge the epistemological foundations that are at the roots of this settler colonial project.