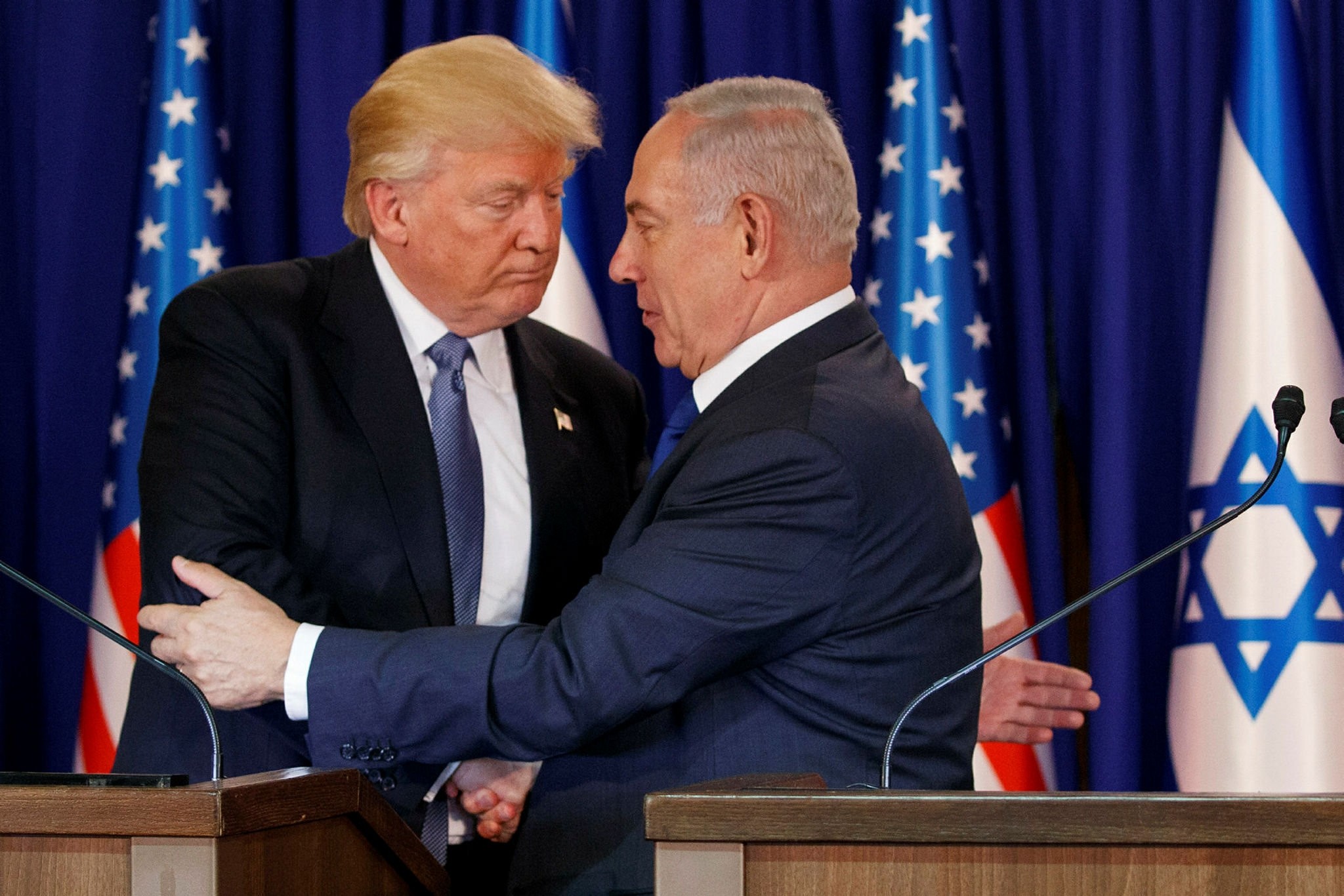 A recent visit to Qatar by attorney Alan Dershowitz, Zionist Organization of America President Mort Klein and former Arkansas Gov. Mike Huckabee is part of a campaign by Zionist leaders in the U.S. and their supporters to fortify Israel's standing in the region in the most difficult period faced by the Arab Muslim world. We cannot blame them for grasping the opportunity, but should rightly expose and critique it.

Currently, Qatar is facing a siege from the United Arab Emirates (UAE), Saudi Arabia, Bahrain and Egypt and, in response or as a way to alleviate the pressure, hired the Washington lobbyist Nick Muzin, a former adviser to Texas Republican Senator Ted Cruz. Muzin was tasked with improving the country's standing in the U.S., with a specific focus on the country's Jewish population. A similar effort was undertaken by Saudi Arabia, with an invite and a country tour by New York Times columnist Thomas Friedman, who never misses an opportunity to demonize and problematize Arabs and Muslims while supporting every U.S. and Israeli military campaign targeting the population in those regions.

Here, the agenda for Qatar and the four countries involved in the siege passes through Washington and structured relations with American Zionist organizations that seek to obliterate Arab and Muslim support for Palestinians. For me, the issue is not to delve into the current Gulf crisis or take sides between the various parties, but rather highlight and critique the current engagement with American Zionist organizations and the incorrect assumptions that they are well-suited to help resolve the ongoing conflicts by using their access in Washington. All the countries mentioned above, along with others, have internalized this incorrect assumption that the road to Washington passes through Tel Aviv and that American Zionist organizations have access to decision-making circles in the U.S. While the American Israel Public Affairs Committee (AIPAC) is powerful and able to push Israel's agenda in Washington, the thought, however, that this will be used for the benefit of any Arab or Muslim country is delusional, even when it produces momentary or short-term benefits.

Indeed, Qatar is not alone in the effort to court major American Zionist organizations in the hope of improving or shifting the boundaries of the ongoing protracted crisis. The logic is that the pro-Israel lobby in the U.S. is very powerful and a key player in shaping the U.S.'s regional policies, which has led to various initiatives to solicit their support on key intra-Arab and Muslim relations and post-Arab Spring conflicts. Thus, the recent reports of various Gulf states courting and trying to curry favor with major Zionist organizations in the U.S. is both disconcerting and shortsighted. It is disconcerting because it is being carried out at the expense of and in exchange for downgrading the occupation of Palestine as a central point on the regional agenda. Furthermore, it is shortsighted because the central assumption behind it is that Israel will protect the individual interests of the Gulf states rather than continue to expand its own, regardless of the circumstances. Let us be clear, Israel is in this regional game for one reason only – its own interests centered on dispossessing the last vestiges of the idea of a Palestinian state and to force the Arab Muslim world to surrender to Zionism's vision of the region.

American Zionist organizations have always acted to promote and expand Israel's sphere of influence, both regionally and globally, by using their access and influence toward this goal. It is Israel's security and interests that drive the agenda of these U.S.-based organizations and the visits to the Gulf, Arab and Muslim countries are intended to strengthen and expand the sphere of influence. Due to this intense and complex engagement, Israel has become the key regional power, working to broker security and strategic relations between the various Arab state actors and some of the non-state actors. The subtext of this involvement is directed at creating favorable strategic conditions for Israel and developing a regional coalition to fight a future war against Iran.

Now, the worst kept secret in the region is that Israel is the real powerbroker among the competing Arab states and existing Arab and Muslim political elites. A similar approach is put to work on the periphery of the Arab world involving Muslim-majority states, but I will leave this for a future article.

Importantly, centering American Zionist organizations in the effort to resolve or address intra-Arab and Muslim conflicts leads to its intensification due to the fact that a new set of demands, external to the existing crisis, is placed on each state in the region. The involvement of Israel and American Zionist organizations is not cost-free, as a heavy strategic and monetary price is levied, leading to further strengthening and consolidation of AIPAC's power and its lobbying infrastructure. There is no such thing as a free lunch. What are Dershowitz, Klein and Huckabee claiming to seek in the region? To free and promote justice for Arabs and Muslims, actually. Why don't they start by calling an end to the apartheid in Palestine, stopping settlements and ending the siege on Gaza before lecturing the region on rule of law, religious tolerance and educational, economic and social reforms?

The contract and resources showered on various initiatives connected to Zionist organizations in the U.S. actually end up increasing the power and influence of these organizations while structurally disempowering Arab and Muslim states and weakening the Arab- and Muslim-American minority populations. At the core, all politics is local, which means that buying and contracting influence is a faulty strategy if long-term policy shifts are needed. Empowering Zionist Organization in America, Friedman and Dershowitz to provide momentary relief will lead to setting the stage for a prolonged and more permanent crisis and fragmentation in the region. American Zionist organizations and national spokespeople are concerned with one, and only one, issue – how to provide maximum security and influence for Israel in the U.S. and in the region. Thus, American Zionist organizational engagement in the affairs of the Arab Muslim world is structured to advance Israel's interest and security at the expense and beyond all other considerations. To think for a moment that liberal, torture courts supporter Dershowitz, war supporter Friedman and settlement expansion advocate Klein are interested in peace and security in the Middle East is a sick joke masquerading as sincere diplomacy. This delegation consists of individuals who have supported every Israeli attack on Palestinians, Lebanese, Iraqis, Egyptians, Tunisians and Syrians, and who are major advocates for a regional war on Iran.

The more problematic part of this current engagement is the proclivity of American Zionist organizations to be on the forefront of Islamophobic discourses and demonization of the Arab and Muslim presence in the West. Consequently, engagement with these figures who have had a long history of demonization of Arabs and Muslims leads to conveying a garb of legitimacy to their voices and organizational affiliation at a time of intense Islamophobic attacks facing minorities in the U.S. and Europe. Other Islamophobic figures who have been given red carpet receptions in parts of the Arab Muslim world include Daniel Pipes and Brigitte Gabriel, two leading characters at the hub of the Islamophobia industry.

The intra-Arab and Muslim conflicts, both ideologically and politically, have seen this shift and embrace of Israel and American Zionist organizations by all parties in the hope of securing an elusive victory. This approach is both delusional and shortsighted. Israel is not interested in a stable, unified and cohesive Arab Muslim world because such a development would undermine its hegemonic position in the region.

More importantly, a unified region will be far more able and ready to center Palestine and the Palestinian struggle on their regional and global political, economic and social agendas. The demands by Israel and American Zionist organizations are to normalize the economic and political relations with the settler colonial state and to suppress the freedom of the press that highlights the daily atrocities committed against Palestinians. Precisely on this point is the constant demand that Qatar and Arab media outlets stop critical coverage of Israel while reducing every aspect of it to accusations of anti-Semitism. This is evidenced by the demands on Qatar that Al-Jazeera's completed documentary on the U.S. and AIPAC will be censored and not be allowed to air.

The media in the Arab world should not be censored or managed to clean Israel's apartheid image, and American Zionist organizations are the wrong partner to foster and facilitate intra-Arab and Muslim relations. Furthermore, relations with American Zionist organization are not the same as forging relations with the American Jewish population to combat and address issues of anti-Semitism and Islamophobia and to foster religious understanding and cooperation. Merging Israel's agenda and priorities through the engagement with the Zionist Organization of America and "The Case for Israel" author Dershowitz does a disservice to any attempt at confronting real and substantive anti-Semitism in the U.S. and around the world. This engagement is about Israel's interests, and only that, with everything else immaterial, including Arabs and Muslims, as well as any efforts to resolve current regional conflicts.