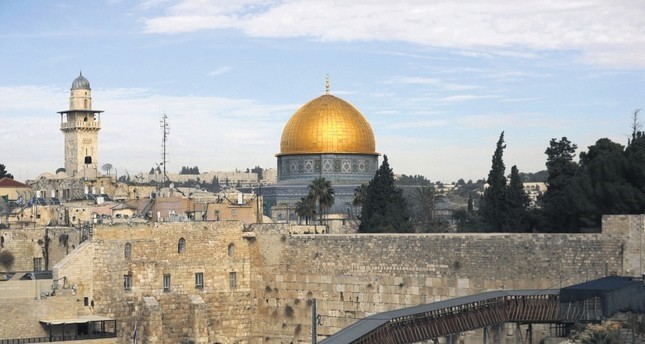 For Zionism, May 14 is set to be a major celebration and an arrival to the top of the mountain, Jerusalem, and a U.S. affirmation of the rightfulness of settler colonialism. Who can argue with this momentous arrival and on the anniversary of Israel's foundation – the Palestinian Nakba. From an old Zionist point of view, the moving of the U.S. Embassy brings the nationalist project full circle, and with it, the claiming of the holy sites in the old city. God, or more precisely the god of Zionist nationalism, have foreseen and prophesied this eventuality since by fire and sword Jerusalem was brought into existence, expanded and is under constant protection.

Now, what is meant by Zionism suddenly ceasing with this triumphant moment of successful nationalism and the claiming of Jerusalem through U.S. President Donald Trump moving the embassy? Indeed, one would think that the opposite would be true, that Zionism and Israel have at last achieved the desired outcome, Jerusalem being the capital and total domination of the Palestinians.

The answer to this has many elements and each must be understood by taking into account what Zionism hoped to accomplish by creating the state and the complex, contested outcomes that it produced. From its inception, Zionism sought to enter the modern era with a nationalist project that unites the Diaspora with the land of Palestine through a settler colonial project that would displace the local population and forge a new society in its place. More than anything, the return, so to speak, to Palestine and Jerusalem is imagined to be the prerequisite for birthing the modern, assertive and powerful Zionist Jewish people. Building a Zionist nation meant the destruction of both the Palestinian and pre-Israel Jewish people and society, replacing them with a European-inspired modern, nationalist project rooted in a distorted and highly racialized secularism beholden to power and violence.

Do not let the distraction of the messages from Israel and Zionists confuse. Violence, dispossession and redeeming the land by expelling the local Palestinian population is constitutive and productive of Zionism and not a reaction or incidental to the project. Claiming Jerusalem is material evidence for the veracity of Zionism, a project that upended traditional Judaism, as it delivered a return from exile by the power of the sword, not the book or the expected prophet.

Zionism has gradually unmasked, despite all its efforts and obfuscation, diversions and blaming of Palestinians for unfolding the utter ugliness of militant and nationalist modernity that was maliciously cloaked from the beginning with a religious purpose. Moving the U.S. Embassy is not viewed as a mere diplomatic decision by a foreign power, but rather cementing the nationalist claims to the holiest of the holy. Indeed, without the Zionist matrimony between the born again powerful Zionist Jewish people and the land, Zionism would stand as an orphaned idea or, worse, a stillborn project. Jerusalem is the affirmation and material evidence needed to provide completeness for the project.

According to Zionism, the creation of Israel is not similar and cannot be compared to any emergence of a modern nation-state; it is a totally different from conception to realization. Ideologically speaking, Zionism had to birth a secular people, transport them to a distant land citing an ancient connection through religious scripture, then rationalize the ethnic cleansing of the local population. Along the entire way toward achieving the modern Israeli state, Zionism has cast Palestinians as an archetypal anti-Semitic population that opposes Zionism because of its Jewishness rather than its settler colonialism. Here, Palestinians standing in the way of modern and secular Zionism were cruelly and self-servingly compared to the inherent and historical anti-Semitism in Europe, which was useful as a way to negate their rights to the land.

As a settler-colonialist project, Zionism sought the land but not the people in it. Consequently, the preconceived plan for Palestinians was set in motion before the Zionist movement arrived, with Theodor Herzl himself theorizing the need to "spirit the penniless Arab population" across the borders while making sure to strike an alliance with the property owners. Settler colonialist projects pursue either genocide or the transfer of the local population, so Zionism is not unique, nor is it an exception to the norm.

The gradual journey toward Zionist dispossessing Palestine's local population of their land is culminating with the move of the U.S. Embassy, as it denotes the last physical site of meaning that provides Palestinians with a sense of being and belonging despite the never-ending occupation. Zionism, as a settler-colonialist project, is not content with only devouring the land and the expulsion of its people, it must also remove all vestiges of meaning, religious or otherwise, from Palestinians. Indeed, for Zionism, Jerusalem is the nationalist and ultra-nationalist trophy that makes the birth of a modern nation-state complete and the erasure of Palestine and Palestinians irreversible in their minds.

The moment of ultimate triumph for Zionism also represents the paramount defeat, signaling the utter and total dependence of Israel and Zionism on an external agent to affirm its possession of Jerusalem. More importantly, the gradual Zionist project, while successful in birthing the powerful and modern Zionist Jewish people, has nevertheless not been able to remove Palestinians from their homeland, which is something that gnaws on a daily basis at Israel's highly militarized society, and more so the settler segment of it. Moving the U.S. Embassy is a ploy to fleece Palestinians anew and force them into Trump and his son-in-law Jared Kushner's "deal of the century," which boils down to certifying the justness of the Zionist seizure of the land and expulsion of its people. More critically, the alignment of Israel with Trump's inane administration just crystallizes the vacuous nature of Zionism and its settler-colonialist project justified with the idea that the end justifies the means.

A global shift on Israel is underway and Zionism hitching its wagon to Trump and the right wing in Europe is accelerating the negative standing Zionism. Moving the embassy has cemented the extreme right-wing nature of Israel's political landscape and its refusal to adhere to human rights and international law or treat Palestinians fairly. Leaving settler colonialism to function by adhering to global norms is very precarious and unsustainable no matter the power or might behind it. Israel's gradual loss of standing and diminishment of the Teflon brand is no longer reversible and the efforts to demonize and defame pro-Palestine forces will not change the trajectory, but it will offer a momentary delay. I cannot say when the turn from gradual to sudden will happen, but I am sure it is on the way and the writing is already visible on the apartheid wall.