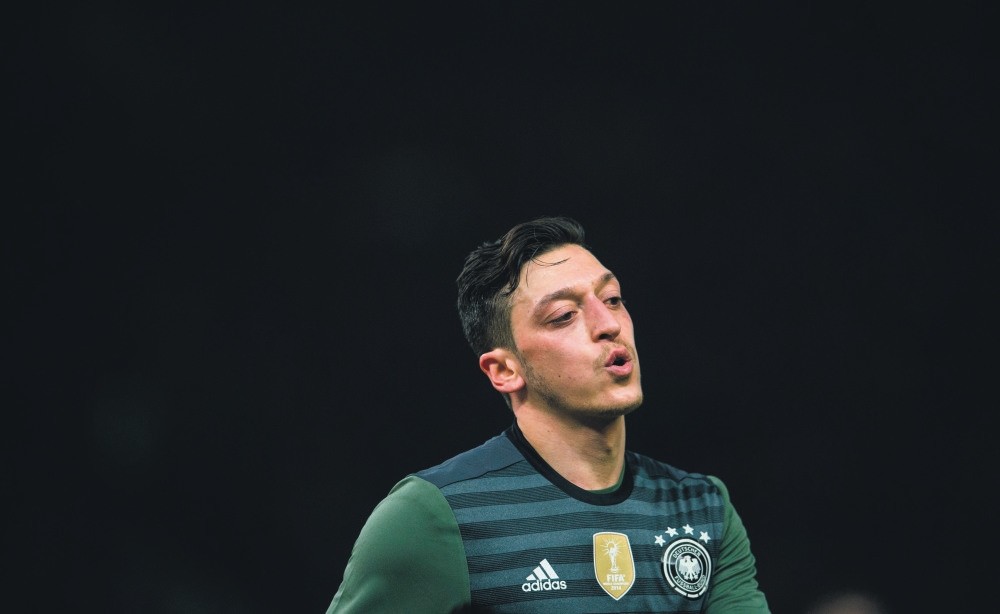 Mesut Özil, the German National Team player, posted a letter on July 22, 2018 explaining his reasons for retirement from the German team and international competitions. One sentence in Özil's letter crystalized the predicament that racial, ethnic and religious minority players face across Europe: "I am German when we win but an immigrant when we lose."Özil's crisis, and also İlkay Gündoğan's, with the German right-wing politicians, the media, and the German Football Federation (DFB) started months before the 2018 World Cup due to a photo that both of them took with President Erdoğan during the latter's visit to London in May.

In the letter, Özil maintained that "having a picture taken with President Erdoğan wasn't about politics or elections, it was about me respecting the highest office in my family's country." The actual meeting took place "during a charitable and educational event" not related to any political campaign and it was not the first time that such a meeting had occurred. According to Özil, their first meeting dates back to "2010 after he and Angela Merkel watched the Germany vs Turkey match together in Berlin."

For Özil, the picture was an expression of his Turkish mother's values stating that she "has never let me lose sight of my ancestry, heritage and family traditions."As soon as the media began to circulate Özil's photo, the DFB president Reinhard Grindel offered a very sharp critique, declaring that soccer and the national association "defend values which are not sufficiently respected by Mr. Erdoğan." Mr. Grindel went on further to imply that Özil's photo was part of a larger political strategy stating: "That's why it's not good that our international players let themselves be manipulated for his electoral campaign. In doing that, our players have certainly not helped the DFB's work on integration."

In his letter, Özil focuses on the double standard applied to him versus other players on the national team or in the case of Queen Elizabeth and Prime Minister May, who both welcomed and met President Erdoğan during his visit to London. The double standard is reflective on how other players on the national team are not constantly or exclusively referred to in relations to their ancestry, which for Özil implies that he is not treated equally or fairly as a German. Representing the country on the football field, paying taxes and contributing in a myriad of ways to German society is not sufficient to be a German.

One might think that Özil's treatment is isolated and can be attributed to the photo but examples of double standards and racism directed at Arab, African and Muslim players are the norm rather than the exception in Europe. The trigger for the avalanche of racist and Islamophobic attacks vary from one player to another but they all fall under the same rubric that affects minority players all across Europe and a similar case can be made about the professional sports in North America. Özil's statement is similar to the one uttered a few years back by Karim Benzema when he said: "If I score I'm French... if I don't, I'm an Arab."

Benzema is the French-born son of French-born Algerian parents but this did not stop the racist and Islamophobic attacks. Racist discourse against immigrants is not confined to Muslims or Arabs as Romelu Lukaku attest: "When things were going well, I was Lukaku the Belgian striker...when they weren't going well, I was the Belgian striker of Congolese descent." At various times in Europe, African players have been met with racist taunts and banana peels thrown at them and on the field during games.

Even though France has won the 2018 World Cup, the path to the most diverse team in history was not always easy or straightforward. In the aftermath of the 2010 competition,"the newly appointed coach of the national team, Blanc, and the French Football Federation [FFF] decided that they should limit the number of African and Arab youngsters from entering the French football academies to only 30 percent." At the time, Blanc was taped saying that "those players did not share our culture, our history," citing the world and European champion, Spain: "The Spanish, they say, 'We don't have a problem. We have no blacks.'"

The double standards, racism, and Islamophobia are a constant reminder that Europe's intolerance of diversity runs deep, despite the progress that has been made since WWII, and is easily stoked into the open. Here, Özil, İlkay Gündoğan, Romelu Lukaku and Benzema exist in the gaps of German-ness, Belgium-ness, French-ness and European-ness and their citizenship carries an asterisk that qualifies their membership as being a contingent one and not permanent i.e. it is a citizenship on probation. This probation has no sunset clause to it and is contingent on "good" conduct that is prescribed by mainstream political, social, cultural and religious discourses, which are often stoked by political elites.

Interestingly, Özil is blamed for Germany's poor and disastrous performance in the 2018 World Cup because of his Turkish ancestry or more precisely due to him not being a real German or, in Benzema's case not French to the source. In his retirement letter, Özil said: "The treatment I have received from the DFB and many others makes me no longer want to wear the German national team shirt… I feel unwanted and think that what I have achieved since my international debut in 2009 has been forgotten." The German population of Turkish ancestry has a long and multi-generational history in the country with some dating as far back as the mid-19th century where the majority were recruited to build the country after WWII. The German population of Eastern European ancestry that arrived in the country around the same period is not treated with this type of racism or public discourse on the soccer field or on the job. A German of Turkish ancestry has to face the constant rejection of belonging and is deemed as an "outsider" or "foreigner" no matter how many generations back their family arrived in the country.

The challenge facing Germany, France, and other European countries is how to move toward a real inclusiveness for a diverse population at a time of rising tide of xenophobia, Islamophobia and anti-immigrant discourses. Right-wing parties are jumping at every opportunity, be it on the football field or the civil society arena, to stoke tension, illustrate differences, and foment fear that can carry them into seats of power. Turkey, Mesut Özil, and İlkay Gündoğan provide the perfect foil to run this strategy and rally right wing forces into the ballot box in future elections to protect German society and maintain the high standards that otherwise would be undermined. The Islamophobia that is focusing on the Turkish subject has been a successful call card for right-wing parties and countering it will take a multidimensional strategy, resources and time.

I don't want to leave the impression that all is bad in Europe and no counter voices currently exist. In the past few years, FIFA and the European Football Federation instituted a counter racism campaign, which has registered some success but more is needed. The coach of the national German football team, Joachim Loew, defended Özil's and İlkay Gündoğan's roles in the team and did not join the racist blame game in pre- and post-World Cup discourses. Also, Liverpool's manager Jurgen Klopp has staunchly defended Mesut Özil and İlkay Gündoğan by publically stating: "The intelligent people of this country demand tolerance. And the others should shut up and not question the boys… We should not forget that the two of them have Turkish roots even though they grew up here, in Germany."