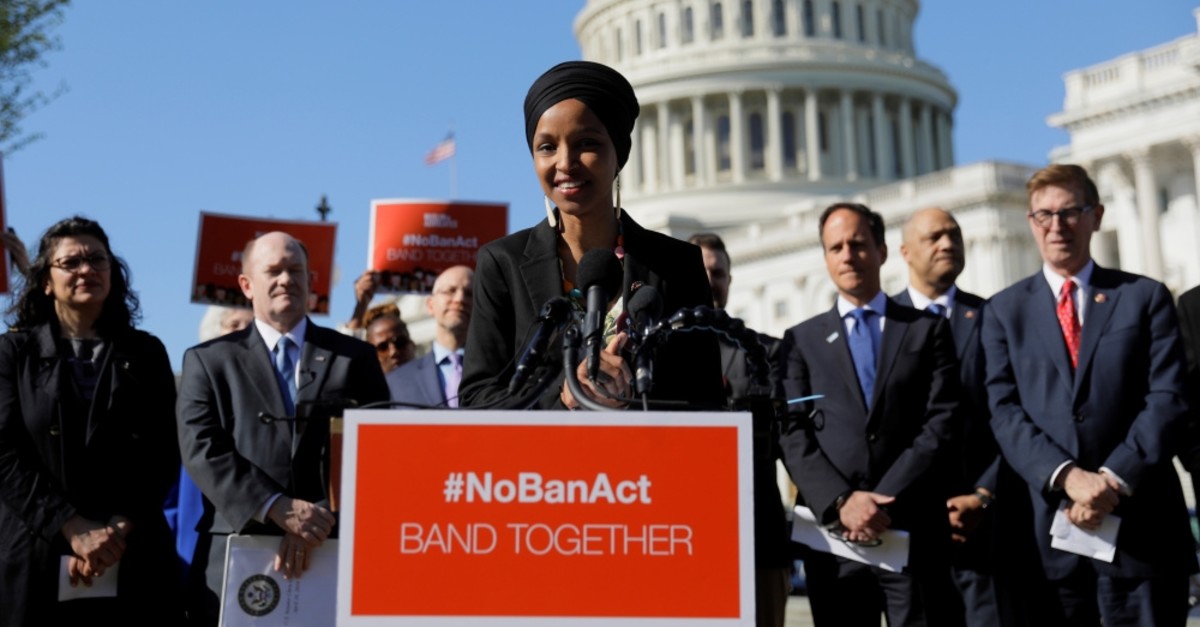 U.S. Representative Ilhan Omar (C) speaks about the Trump administration's policies toward Muslim immigrants at a news conference held by members of the U.S. Congress, outside the U.S. Capitol in Washington, April 10, 2019.
by Hatem Bazian Apr 19, 2019 12:15 am

German politician, military leader and founder of the feared Nazi Gestapo Hermann Wilhelm Göring said: "Oh, that is all well and good, but voice or no voice the people can always be brought to the bidding of the leaders. That is easy." In relation to his plan to achieve this end for the leader, he said: "All you have to do is tell them they are being attacked and denounce the pacifists for lack of patriotism and exposing the country to danger. It works the same way in any country." Far from being tangential to President Donald Trump's approach, the stoking of fear and advancing false claims about immigrants, minorities and Muslims are tools being deployed to rally a sizable segment of American society to the president's side. Attacking Congresswoman Ilhan Omar is part of an overall strategy that fits into what Göring described above and can serve as an advertisement for "the threat" facing the country; an immigrant, a black woman, Muslim and readily challenging the status quo.

Indeed, blame is the name of the game for Trump. Even before winning the 2016 presidential election, Trump perfected the blame game by spewing his venom on the supposed crimes of African Americans and Mexican immigrants as well as the threat of terrorism. The problems facing America, according to Trump, can be attributed to various groups that are taking advantage of the country and cheating their way into prosperity, while the U.S.' "hardworking," mostly white-American voter base is paying the price for it.

Trump blames China for unfair, imbalanced trade but has not once taken into account America's corporate elites who have worked hard and diligently to shift jobs, manufacturing and finances overseas to maximize profit. Trump's favorite business strategy over the years was to send jobs abroad and strike deals to maximize his bottom line at the expense of white working-class voters that he currently and easily stokes to blame China for everything that went wrong in America. China becomes the foil of the economic devastation visited upon middle- and working-class America of all racial backgrounds, including white Americans across the Midwest and Northeast of the country. Here, Trump's fascism is at work, and China is attacking "our" economic security is the threat that must be prevented through action.

Trump blames Mexicans and Latin American immigrants for the supposed increase in inner city crime, which evidence points to an actual decline in the rate of violent crime and murder across the country. However, Trump's factually challenged track record has made him a blame master with the uncanny ability to stoke his racist base into believing and peddling outrageous claims. In addition to crime, Trump has assigned responsibility to Mexicans and Latin American immigrants for the continuous flow of drugs in the country and often links them to the spike in deaths caused by opioid addiction and illegal immigrants. He has not once blamed drug companies and domestic corporations that lobbied for deregulation and flooded the already economically depressed and job-starved areas of the country with addictive prescription drugs.

More critically, Trump's blame game directed at Mexicans and Latin American immigrants has made it possible to erase 50 years or more of U.S. interventionist policies in the region. Focusing the blame on Mexicans and Latin Americans at the border makes it possible and at the same time easy to rationalize the "challenges" posed by immigration while all along rallying his white working-class base to prepare for the 2020 elections. The immigrants that are the bloodline of America's economy are being demonized for election purposes without offering any policy solutions.

Indeed, the immigration debate in today's America is stained with a thick veneer of white nationalism and white power movements, and Trump's rhetoric and approach has emboldened these forces in the country. For a long time, the white nationalist and white power movements have hitched their wagon to racial logic and demands to end the demographic threat posed by immigrants arriving from non-Western regions. The calls for "taking our country back," a favorite rallying cry for white nationalist and white power movements must be understood to mean that the country has been taken over by immigrants and blacks, who are the historical racial "opposite" – a concept white supremacists have used to support their distorted sense of superiority with a long bloody history culminating in the Holocaust. Trump's fascism is at work, and immigrants are being presented as the threat working to undo and transform America's racial landscape

Who is the real target?

Trump's attack on Muslims provides the best cover for stoking his point that the country is being "attacked," not only back on 9/11 but almost daily, despite the factual record demonstrating otherwise. The image of Muslims in Trump's worldview functions in the same way as the image of Jews was used in propaganda to mobilize fascist sentiments in 1930s Europe, ending with the most devastating consequences. Trump's rhetoric, policies and strategies mirror Göring's Nazi strategies, with him denouncing the "left," or Democrats, as the "pacifists" of our day "for their lack of patriotism and exposing the country to danger" because they refuse to see the threat and have embraced Muslims.

Importantly, Barack Obama's election in 2008 was the turning point that caused the emergence of the anti-Muslim and anti-Islam movements and groups, and with it the intensification of Islamophobic discourses in America. During the elections and his presidency, the heritage of Obama was a focal point of attacks from right-wing movements. The Birther Movement and the Tea Party emerged onto the national stage utilizing Islamophobic discourse to undermine the legitimacy of his presidency.

In reality, attacking Obama's Muslim background or the use of the "M" word was a substitute and a signpost for the "N" word, which is not publicly acceptable. The majority of white Americans did not vote for Obama and many were uncomfortable with having a black person in the White House, but it was politically incorrect for them to express it openly. Thus, Islamophobia was coded to express opposition to Obama, anti-black and anti-immigrant racism and at the same time framed as a patriotic undertaking to defend the country from supposed Muslim infiltration and terrorism. Since Obama's presidency, anti-Muslim sentiment has been packaged and monetized into votes at the ballot box in the 2010 midterm elections, in 2012 and in all subsequent elections.

Trump's attacks on Ilhan Omar is Göring's strategy put in place to consolidate the base and puts all opposing forces on the defensive. During Obama's campaign and presidency, Democrats, the left and the right did not come to the defense or counter the propensity of attacks on his supposed Muslim background – only Colin Powell did so publicly. Even President Obama himself took extreme measures not to be identified or counter this false claim because he felt it was a significant liability and only managed to visit a mosque in the U.S. in the last few months of his presidency.

Here, Ilhan Omar's Muslim persona and entry into the halls of power provides an ideal representation of the supposed threat undermining America's power and standing. For Trump and his base, Ilhan's election, arrival in Congress, political courage and visibility are packaged into the much needed right-wing ethos, pathos and logos to stoke the fear that drives the fascistic imaginary and builds the threat of loss and weakness of whites in America. Thus, Ilhan is projected as the sign and embodiment of the threat and loss of the country.

If Obama ran away from the Islam tagline, then Ilhan's running to and with Islam is Trump's new Birther moment, and he will try to ride it all the way to the 2020 presidential elections. The strategy deployed against Obama eventually worked, and the result is Trump winning the White House in 2016; however, the same outcome for the 2020 elections is highly unlikely.

Omar embracing her Muslim identity and not shying away from it will neutralize Trump's strategy and its effectiveness in the long run, despite the continued presence of negative and Islamophobic attitudes among his base and segments of the Democratic Party. Furthermore, the shifts among the grassroots and the Democratic base has emboldened a new young and young-at-heart generation that has embraced Ilhan and also Rashida Tlaib as leaders of a new diverse and complex movement that will reshape the next cycle of politics in the country. A longer piece on this subject is forthcoming. Trump's fascism is evidenced across the country but so is the visible resistance, including Ilhan's hijab and Islamic vocabulary, that we all must get used to, inshallah, sooner than later.