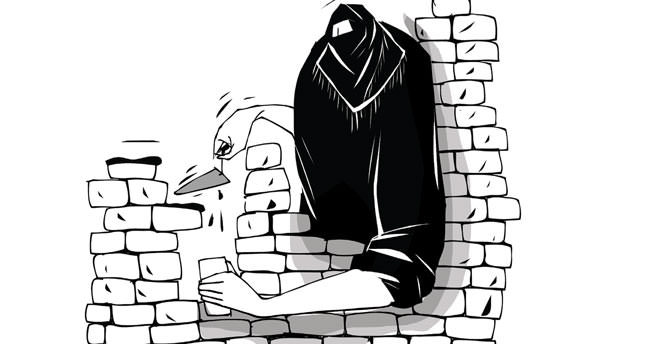 by Hatem Ete Oct 16, 2014 12:00 am
A wave of protests that emerged on Oct. 8 following a call by Selahattin Demirtaş, the chairman of the Peoples' Democratic Party (HDP), incurred high costs with long-term repercussions. This call for "indefinite resistance" - which reflected the sentiments of the PKK's imprisoned leader, Abdullah Öcalan, the organization's operational leadership in Mt. Qandil and the HDP - resulted in 39 casualties and acts of vandalism against public and private property over a week. Guided by the PKK, young radicals entered a state of collective frenzy to pillage residential areas and target members of their perceived adversaries.

In contrast, the Kurdish reconciliation process had entered one of its brightest periods ahead of last week's demonstrations. Prime Minister Ahmet Davutoğlu had moved to establish a taskforce where he would personally preside over their bi-weekly meetings. The government also adopted a long-anticipated legal framework for the reconciliation process that led the cabinet to publicize a detailed roadmap in the Official Gazette.

These steps, of course, received support from Öcalan and paved the way for the Prime Minister's meeting with HDP chairman Demirtaş, where he reiterated his government's commitment to dialogue.

At a time when concrete steps have been taken with regard to the reconciliation process, whose roadmap and action plan were formulated despite various hurdles, the PKK-dominated Kurdish movement engaged in a series of protests with the stated purpose of raising awareness about the ISIS siege on Kobani and to publicize claims about Turkey's lack of support to the PYD. There is no doubt, however, that the protests have rapidly extended beyond their original scope to create a new political context. The Kurdish political movement, controlled by the PKK, came to realize the unforeseen consequences of the demonstrations - albeit only after the damage was done.

The most significant political outcome of the demonstrations was the Kurdish political movement's loss of legitimacy - which it derived from the reconciliation process. After all, the reconciliation process had made it possible for the Kurdish movement to pursue political opportunities and seek legitimacy at the expense of terror and violence. The HDP's very foundation reflected these opportunities.

Meanwhile, Demirtaş ran for president and reached out to new constituencies thanks to his leftist-democratic platform. These developments led many observers to suggest that the HDP could indeed become the new standard-bearer within the Left and even break the 10-percent national threshold in the 2015 parliamentary elections.

As nationalist-conservative voters rallied behind the reconciliation process, public opinion became accustomed to government officials meeting with Öcalan and the PKK's operational leadership. At the same time, the PKK cited its two-year ceasefire to demand of the international community to remove its name from the list of terrorist organizations and provide its militants with weapons to defeat ISIS. The list of benefits, of course, goes on and on.

Therefore, in this context, the most important outcome of last week's protests was that the Kurdish movement lost its legitimacy in one week, legitimacy that it had accumulated over a two-year period thanks to the opportunities that the reconciliation process enabled.

The national public opinion at once realized that the PKK was prepared to resort to violent means and understood that the HDP and other civilian components of the movement were not serious about exploring leftist-democratic political options. In this sense, this misstep has caused serious harm to the movement's efforts, such as the HDP's establishment and the Demirtaş drive to become a more relevant actor at the national level.

In conclusion, the Kurdish movement's eagerness to call for a series of costly protests at a time of major progress and continued public support for the reconciliation process ended up hurting its own legitimacy than anything else.