After the nuclear deal 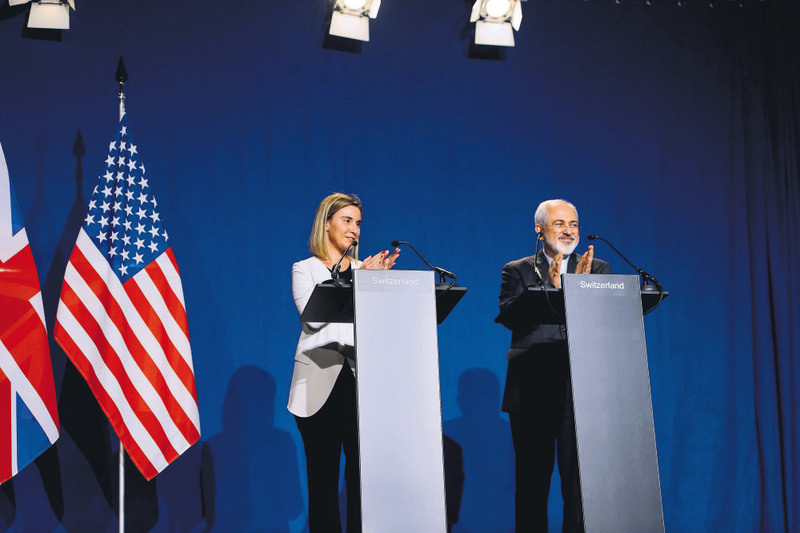 The five permanent members of the United Nations Security Council, Germany and Iran announced on April 2 that they have reached an agreement on Iran's nuclear program. After more than a decade of tensions, sanctions and negotiations, this is an important outcome for both the non-proliferation of nuclear weapons and relations between Iran and the West. While Iran has seized a historic opportunity on the nuclear issues, there remain equally important political and security challenges. The framework agreement announced on Thursday, whose technical details will be written until June 30, ensures the substantial reduction and revision of Iran's nuclear program to prevent the production of the uranium or plutonium-based nuclear bomb. The deal is comprised of five main principles.

Second, uranium enrichment will be reduced to 3.67 percent, which is much lower than the level needed to make a nuclear bomb. Iran will also reduce its stockpile of 10,000 kilograms of low-enriched uranium to 300 kilograms. Third, Iran will continue nuclear research for peaceful purposes. The Fordow facility, one of Iran's largest nuclear plants, will stop enriching uranium for at least 15 years.

Fourth, The U.N.'s International Atomic Energy Agency (IAEA) will have full access to Iran's nuclear facilities for inspections. Fifth, When the IAEA confirms that Iran implements the measures above, the nuclear-related sanctions imposed by the U.S. and EU on Iran will be lifted gradually. P5+1 maintained throughout the negotiation process that no deal is better than a bad deal. At the end, a good deal has emerged whereby Iran will develop peaceful nuclear energy but have no technical capacity to build a bomb and the West will lift nuclear-related sanctions.

Speaking at the White House minutes after the declaration of the agreement, President Obama said: "I am convinced if this framework leads to a final, comprehensive deal, it will make our country, our allies, our world safer." American and European officials underlined the importance of the deal for regional and global security. Iranian Foreign Minister Javad Zarif said a "win-win outcome" has been achieved, but added: "We have taken a major step, but are still some way away from where we want to be."

Turkey has supported nuclear talks all along, hosting various meetings in Istanbul and facilitating the process. In 2010, Turkey teamed up with Brazil and Iran and offered the Tehran Declaration to overcome the impasse at the time. The final outcome announced on Thursday is a welcome development. But there is a long list of players who are not convinced that this is a good deal. They include the hardliners in Iran, the skeptics in the U.S. Congress, the hawks in Israel and the Arab Gulf countries that are concerned about Iran's growing influence in the Middle East through its sectarian policies. The next few weeks will see a heated debate about the virtues and vices of the deal.

But no matter what the naysayers say, this is an important deal that can reduce tensions and prevent new conflicts. After all, any reduction of the nuclear weapons industry is a contribution to world peace. This should be a guiding principle for those countries with nuclear weapons as well. Yet, as the recent events in the Middle East show, there are other dangers that threaten the security of our world. At a time when the global security structures are undermined by all forms of conflicts between and among nation-states and non-state actors, one can never be vigilant enough. As the negotiating teams were deep into their deliberations in Lausanne, al-Shabab, the Somali-based terrorist organization, launched a massive attack on Garissa University in Kenya, killing 147 students in cold blood. This barbaric act is only the latest episode of the growing terrorism threat around the world.

In Yemen, the Houthis, backed by the former President Ali Abdullah Saleh and Iran, have overrun the country, creating chaos and disorder. The Saudi-led coalition is seeking to restore order in that country but given Yemen's social and tribal realities this is not an easy job. More dangerously, the Yemeni crisis has become a proxy war between Saudi Arabia and Iran and runs the risk of a full-blown Sunni-Shiite conflict in the Gulf.

Not surprisingly, the Gulf countries have been following the Iranian nuclear talks with a certain degree of anxiety and frustration. The reason is simple yet profound: they are more concerned about Iran's political maneuvers and proxy policies in Iraq, Syria, Lebanon and Yemen than its nuclear program. The nuclear deal should be a relief for all of Iran's neighbors and celebrated by them. But the current geo-political rivalries and tensions take precedence over other issues.

At this point, the perceptual disconnect between the West's threat perception and that of Arab states is not to be taken lightly. The differences over Iran may play out in serious ways between the Gulf countries and the West. The Yemen crisis unveils the extent of such a dangerous scenario. As Iran enters a new period in its relationship with Europe and the U.S., it needs to take a close look at its relationship with Arab and Muslim nations and work to change the perception of its policies as sectarian, divisive and expansionist. It will be to the benefit of all parties to have a regional political and security order in which Iran is integrated with mutual trust and cooperation rather than unnecessary confrontation and self-destructive rivalry.

Presidential spokesperson for the Republic of Turkey
Last Update: Apr 04, 2015 1:57 am
RELATED TOPICS