Turkey and Kazakhstan: A relationship to cherish 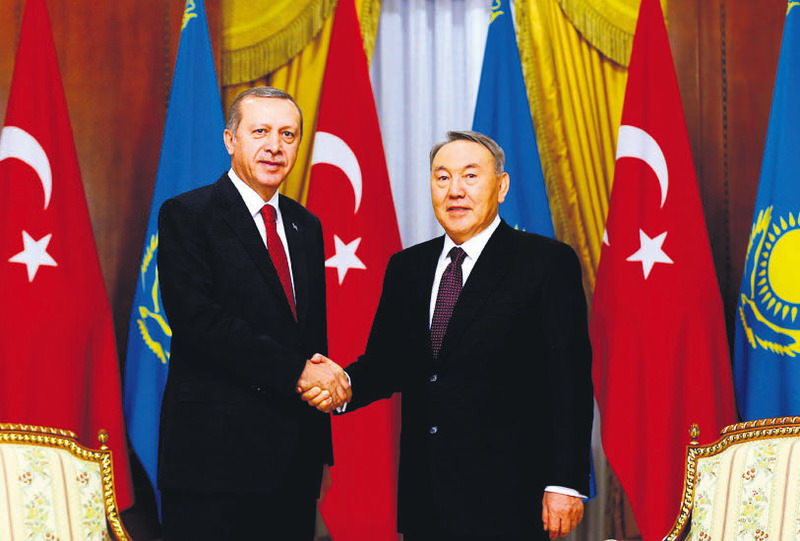 Turkey and Kazakhstan have formed a good relationship over the recent years, equally benefiting both sides in numerous ways. This relationship is expected to gain further depth and width in the near future

Next year, Kazakhstan will celebrate the 25th year of its independence. With a population of over 17 million and a large landmass, it is one of the pivotal states of Central Asia. It is also strategically situated between two major powers: Russia and China. Kazakhstan has extensive economic and political relations with Europe and the U.S. This makes Kazakhstan a country of 'balance-politics,' where the Kazakh leadership seeks a foreign policy based on regional cooperation and global engagement.

President Erdogan visited Kazakhstan on April 16-17 to hold the second meeting of the High Level Strategic Council between the two countries. Turkey was the first country to recognize Kazakhstan's independence in 1991. Nursultan Nazarbayev, Kazakhstan's President, still recounts with gratitude how Turgut Ozal, President of Turkey at the time, called him only two hours after Kazakhstan declared independence. Since then, the two countries developed close relations at political, economic and cultural levels. Turkish companies have completed projects worth $20 billion. The 2014 trade volume was over $3 billion. The goal is to reach $10 billion over the next five years.

Two major factors have had a negative impact on the Kazakh economy over the last year. The first is the low oil prices, which is a side-effect of the Ukraine crisis, and which has affected a number of countries in the Middle East as well. The Kazakh economy is based on natural resources including oil, gas and uranium, and is therefore easily affected by the volatility of the global energy markets. The second major factor is the sanctions imposed on Russia by the West. The Kazakh economy is closely tied to that of Russia, and inevitably feels the impact of the turbulence in the Russian economy. As Kazakhstan aims to become one of the top 30 economies in the world over the next ten years, it will need to diversify its economic resources and global markets. A major project that will help Kazakh oil to reach European markets is the TANAP project launched by Turkey and Azerbaijan. TANAP should be completed in 2018. With Azeri, Turkmen and Kazakh oil and gas, TANAP will be one of the most important pipelines connecting Central Asian energy to the Balkans and Europe.

The fact that Kazakhstan has to perform a balancing act between Russia and China on the one hand, and Europe and the U.S. on the other, presents several options to the Kazakh leadership. Kazakhstan can maintain good economic relations with Russia and China without turning its back to European markets. The same holds true for its special relationship with Russia. At any rate, Nazarbayev understands the subtleties of Russian politics more than any other Central Asian leader.

Besides the necessities of geography and economics, Kazakhstan is also a country of multiple religious and ethnic identities. The Kazakh leadership has managed to embrace this multiplicity with a reasonable degree of pluralism without giving in to either ultra-nationalism or xenophobia. About one quarter of Kazakhstan's population is Russian, though many of them have integrated into Kazakh society. As Kazakhstan moves closer to the 25th anniversary of its independence, its national identity gains clarity with a strong economy and growing population.

Many elements unite Turkey and Kazakhstan. Economic relations, as mentioned before, are gaining strength, although there is more work to be done to reach the $10 billion trade goal. The two countries see each other as political allies, and they cooperate on numerous regional and global issues from the group of Central Asian Turkish republics to the U.N.

Hoca Ahmet Yesevi, the spiritual father of all Turks, unites the two peoples, as his works are read to this day from the depths of Central Asian steppes to the Balkans. Yesevi's message of faith, peace and virtue resonates across the wider Turkic world. His direct disciples have established many fraternities around the world and carried his spiritual message into modern times.

A concrete embodiment of this special bond is the Hoca Ahmet Yesevi University, jointly established by Turkey and Kazakhstan only a few years after the independence of Kazakhstan. Today, the university has more than 12 thousand students from about 30 countries. It is located in the historic city of Turkistan, where Hoca Ahmet Yesevi's tomb is also situated. Besides students, every year thousands of Muslims from around Central Asia visit this tomb. Turkish-Kazakh relations are certain to gain more depth and width in the years to come. This will be undoubtedly in the interest of both the Kazakh and Turkish people.

Presidential spokesperson for the Republic of Turkey
Last Update: Apr 18, 2015 9:03 am
RELATED TOPICS