The death of justice and politics in Egypt 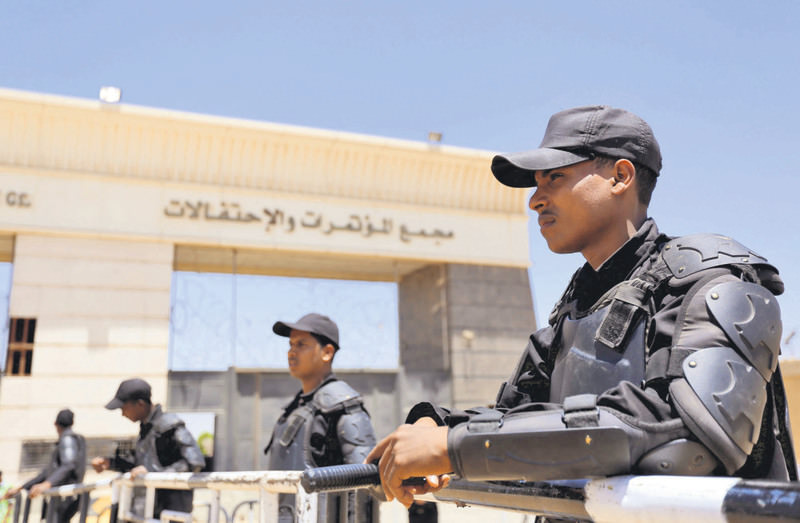 Policemen take their positions during the trial of ousted Egyptian President Morsi and Muslim brotherhood leaders at a court in the outskirts of Cairo on May 16, 2015.
by İbrahim Kalın May 23, 2015 12:00 am

Apart from being a travesty of justice, Egypt's former President Morsi's sentence has a potential to drag the country into yet another long-standing social and political crisis

The death sentence given to the former president of Egypt, Mohammed Morsi, along with 105 people is the latest example of the deepening political and social crisis in Egypt. As the human rights organizations described it, this is a travesty of justice. But it is also a dangerous move that can destabilize Egypt and the region. Some observers hold that Morsi is unlikely to be executed. Many hope that the regime will not be so insane as to kill an elected president based on phony charges. But the long-term consequences of the sentence, even when not executed, will be serious. The el-Sissi regime's draconian measures against political opposition include the Muslim Brotherhood, the liberals and now even the Salafis who had initially supported the removal of Morsi. Mr. Sissi seems determined to push the opposition but especially the Muslim brotherhood to the extreme and force them to go violent. He will then come back and say that they are all terrorists and that he was justified in crashing them. Let's hope that the rational people of the world will not be fooled by this fallacious logic.

The death sentences, which include the religious scholar Yusuf al-Qaradawi and the prominent academic Professor Emad Shahin, also show that Sissi and his supporters are not interested in any sort of national reconciliation and peace. This is bad news for the future of Egypt. Imprisoning more than 40,000 people for political reasons, putting hundreds of them on the death row and closing down newspapers and NGOs are not going to bring peace, stability or prosperity to this key Arab and Muslim country. The coup in Egypt in 2013 and what unfolded since then has further darkened hopes for a promising future. The Sissi regime, embraced by almost all Western governments in the name of political expediency, has killed thousands of people, imprisoned tens of thousands of them, closed down newspapers, imprisoned or expelled NGO workers and created a state of fear and suppression worse than that of the Mubarak era.

Among others, let's remember what happened on August 2013 where 817 civilians at Rabaa Square were killed. According to the Human Rights Watch, the Egyptian military "systematically and deliberately killed largely unarmed protesters on political grounds" in actions that "likely amounted to crimes against humanity." The world kept silent over these massacres. The Sissi regime moved on with new atrocities. The death sentence given to Mohammed Morsi along with 105 other people last week is only the latest example of the extent to which justice has lost its meaning. It is also the death of the most fundamental human rights by any standard. But what is even more worrying for the future of a democratic and civilized world order is the extremely weak response to and in some cases shameful silence of democratic countries over these gross violations.

Denouncing the death penalty as a matter of principle, as the EU did in its response last week, falls way short of condemning a great injustice. Expressing "concern" does not send any message to the coup regime in Egypt, which is most likely to take these weak and ineffective messages as a signal to get away with its policies. It is in Egypt's interest to abolish these comical death sentences, release political prisoners and allow all parties to enter the political sphere again. Along with several other human rights organizations, the Amnesty International released a statement calling the trial a "charade" on Saturday. Said Boumedouha, deputy director of Amnesty International's Middle East and North Africa Programme, said "condemning Mohamed Morsi to death after more grossly unfair trials shows a complete disregard for human rights. His trials were undermined even before he set foot in the courtroom. The fact that he was held for months incommunicado without judicial oversight and that he didn't have a lawyer to represent him during the investigations makes these trials nothing but a charade based on null and void procedures."

Turkish President Recep Tayyip Erdoğan is the only world leader who has condemned the death sentences so far. He also criticized Western governments for not confronting the Sissi regime on this and other violations of human rights and due judicial processes.

It is a pity that those who preach democracy and human rights to Arabs and Muslims now keep silent on the most outrageous and gross violations of these principles in Egypt. This is more than double standard; this is the vanishing of any standards at all. Next time they talk about democracy, political representation, accountability and human rights, someone should remind them of their position on the death of justice in Egypt.