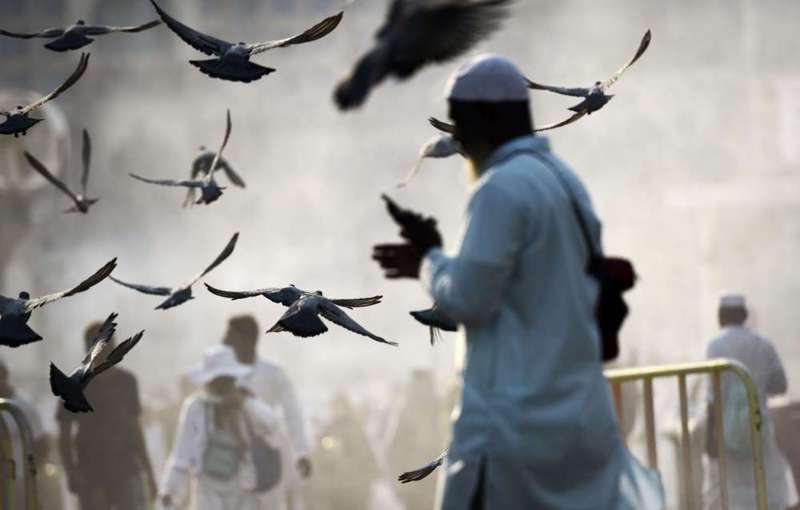 The message of Qurban for the salvation of humankind is to make a sacrifice to reveal the inner good to establish peace in the world by defeating one's own ego full of vanity, jealousy, hatred, greed and lust

Muslims around the world celebrate Qurban Bayram (Feast of Sacrifice), also known as Eid al-Adha, in an act of submission and purification following the footsteps of Prophet Abraham. Muslim pilgrims perform the hajj in Mecca as Prophet Muhammad taught them 14 centuries ago. Every act of worship is an act of returning to the origin, going back to the beginning of things so that we can comprehend how it all makes sense here and now. Muslims should take this opportunity to reflect upon their intellectual and moral state in the year 2015.

Prophet Abraham's story of sacrificing his own son and then being rewarded with a sacrificial lamb is an ultimate test for sincere submission to the one we love the most. It narrates how unconditional love requires the greatest sacrifice. It suggests that even prophets are tested to attain absolute certainty and provide an example to their followers.

Abraham's submission is not an act of blindness or fanaticism. Rather, it is based on a proper understanding of reason and will. Submission makes sense only when the person is sane, able to use his reason and force his will on his ego and desires. Abraham's story is an example of how a devoted servant of God receives the divine message, understands its immensity and moves to execute it so that he fulfils his promise to God. This unconditional love for the Divine is answered by God's infinite mercy. By sending the sacrificial lamb, which has set the foundation for animal sacrifice in the Abrahamic tradition, God shows that what matters is neither the flesh nor the blood but man's spiritual perfection through self-sacrifice. The Quran says: "It is not their flesh nor their blood that reaches God; it is your piety that reaches him." (22:37)

This may sound rather quaint to the modern ears that are accustomed to such slogans as freedom, autonomy, liberty, personal choice, individual taste and self-improvement. The façade of the rise of the individual as the center of existence is an illusion of the modern age where impersonal institutions, structures and necessities make every person depend on a system of relations over which none of them has control. Reading Hegel, Marx had defined this as "alienation" whereby we no longer have control over what our hands have produced. Whether we book an air flight, sit a college exam or talk about climate change, we all experience a moment of the mad doctor and the Frankenstein story.

Abraham's story suggests that change in a society begins with inner transformation rather than material conditions. Abraham may have been in Canaan or Urfa rather than Mecca when he was asked to sacrifice his son. He may have been tested with flood or cold rather than with fire and heat. Regardless, he was put to the ultimate test of love, sincerity and submission for generations to follow. Abraham's son Ismail (the Quran does not mention his name but Muslim scholars agree on him being Ismail/Ishmael; the Biblical sources identify him as Ishaq/Isaac) is much an essential part of the story as the father of monotheism himself. Father and son both pass the test with resolve and nobility. Their joint act of self-sacrifice changes the course of history and indicates that goodness and virtue reign only when people change what is in their heart. The Quran says: "God will not change the condition of a people until they change what is in themselves." (13:11)

Qurban, the other name of Eid al-Adha's, which also means sacrifice, has the rich connotation of "getting closer and attaining proximity." Going back to the beginnings of the children of Adam and Eve on earth, it alludes to the tragic story of Cain (Qaabil) and Abel (Haabil) whereby God accepts Abel's offering of a sheep while rejecting Cain's crop. Angered by a sense of rejection and jealousy, Cain commits a terrible crime and kills his own brother, thus failing the test. What should have brought him closer to God through sacrifice drives him further away from Him and his humanity.

A sincere sacrifice is what brings us closer to the Divine. It enables us to overcome our own infirmities and reach out to that which is larger than us and which completes and enriches us. It prepares us for a life of virtue and devotion. It teaches us how to serve others while serving God. It takes us beyond flesh and blood. But if it is tainted by greed, vanity, wickedness, lust and jealousy, it only drives us away from the infinitely Good and Merciful.

Prophet Abraham's timeless story is as relevant today as it has ever been. As the Muslim world re-enacts Abraham's sacrifice, it needs to reflect upon the intellectual and spiritual impoverishment in which it finds itself today. The Muslim world needs a revolution of the mind and a renewal of the spirit to overcome the challenges and calamities it faces today. Lost between a glorious past, a miserable present and an uncertain future, young Muslims look for an ideal to which they can devote their intelligence and passion. Religious scholars and intellectual leaders need to explain how Muslims can be a medium of truth, good and mercy in a world of indifference, materialism and violent extremism.

Blaming only others does not solve our problems but leads to intellectual laziness and moral conformism. For one reason or another, Muslims have allowed injustice, inequality, poverty and extremism to fester in their countries. Instead of working to resolve their problems with wisdom, patience and sacrifice, they have resorted to intolerance, fanaticism and violence.

The Islamic intellectual tradition underlines the complementarity of the "inner" (al-batin) and the "outer" (al-zahir): What is out there is a reflection of what is within you. We need to think better and work harder in order for the good within us to come out and establish peace, justice and mercy in the world. This feast of the "qurban," this noble act of proximity-through-sacrifice, should be an occasion to prevent evil and spread the good.