Turkey, Europe and the refugee crisis 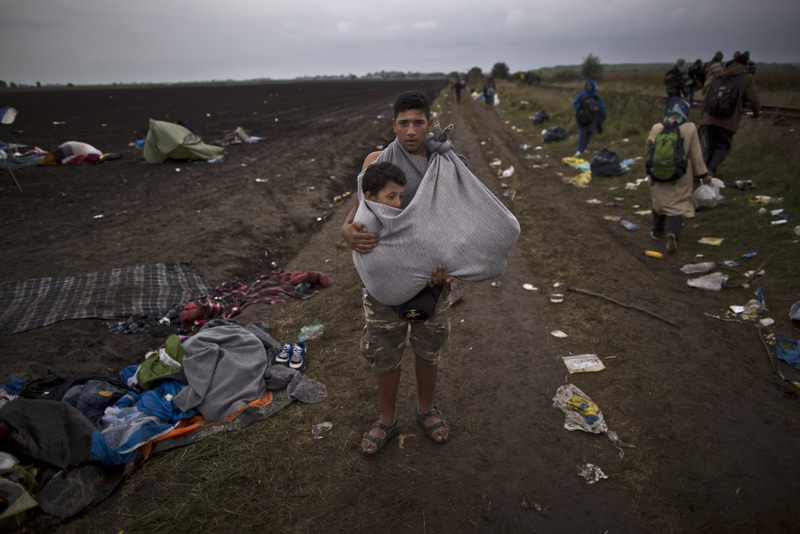 Half-baked measures and face-saving steps will not produce sustainable solutions. By helping Turkey, EU countries will be helping themselves.

The Syrian refugee crisis has created new political and humanitarian dynamics from the Levant to Turkey and Europe. It has also laid bare the enormous challenges of saving and taking in hundreds of thousands of people fleeing a brutal and immoral war. Turkey has been shouldering the responsibility with over 2 million refugees from Syria and Iraq - a moral and humanitarian duty for which it has received praise and appreciation. But more needs to be done to manage what the United Nations High Commissioner for Refugees (UNHCR) describes as the largest refugee crisis since World War II.

President Recep Tayyip Erdoğan was in Brussels this week to discuss this and other issues with EU leaders. European Council President Donald Tusk, of the European Commission President Jean-Claude Juncker, European Parliament President Martin Schulz and Erdoğan agreed to form a Turkey-EU working group that will look into the humanitarian, logistical and financial aspects of the crisis. Turkey has already established a working group with Germany that will act as a task force to manage the flow of refugees from Syria and elsewhere to Europe. The Turkey-EU working group will prepare a road map with short- and long-term measures to find an acceptable and sustainable solution to the deepening crisis.

Juncker said that "It is clear that we need Turkey. The commission will come to its aid."

His words echo the general sentiment in Europe.

On Oct. 7, in a rare move, German Chancellor Angela Merkel and French President François Hollande jointly addressed European Parliament to urge EU member states to step up to the plate.

Hollande defended an "outgoing Europe" able to "reaffirm the simple and clear principles of solidarity, responsibility and firmness" while Merkel referred to Turkey's "key role" and pledged more support.

Indeed, more support and coordination is needed. Turkey cannot deal with this growing crisis by itself. It already has around 2 million refugees from Syria in refugee camps and cities around the country. They are looked after by the government as well as nongovernmental organization and private citizens. The UNHCR and related EU agencies provide some help, but it is way below the required amount and desired efficacy.

Furthermore, Russia's military involvement in the Syrian war may lead to new waves of refugees. Its attacks on moderate Syrian opposition groups in and around Damascus, Hama, Homs and Aleppo are likely to trigger new waves of refugees. Most of them would likely come to Turkey as it is the safer and easier path for many of them living in the north of the country.

There are three short- and long-term measures that need to be taken to deal effectively with the current refugee crisis. The first is to coordinate the arrival and settlement of refugees who are either already in European countries or en route to them by land and sea. The scenes of women and children walking long distances, sleeping on the streets or gassed by police are shameful and must be stopped. Europeans and nongovernmental organization have opened their arms and hearts to refugees, and the governments should do the same. Anti-immigrant and xenophobic groups exploiting the suffering of refugees should be reminded of Europe's own history of migration only a few decades ago.

The second is to increase coordination and cooperation between Turkey and the EU for refugees from Syria, Iraq and elsewhere. As I mentioned above, the Turkey-EU working group on refugees has already begun its work and detailed consultations will follow. Here, the needs and priorities of Turkey and the EU need to be brought together. Burden-sharing rather than burden-shifting should lead discussions. Half-baked measures and face-saving steps will not produce sustainable solutions. By helping Turkey, EU countries will be helping themselves. As Erdogan said during his visit to Brussels, a broad set of measures including accelerating Turkey's EU accession process and expediting visa-free travel for Turkish citizens can ease Turkey's burden, which in turn will make the EU's work easier.

The third goes to the heart of the refugee crisis and it is the fact of the Syrian President Bashar Assad's regime's bloody war in Syria. As several studies show, Syrian refugees are fleeing barrel bombs, chemical weapons and militias fighting on the side of the Assad regime as well as the Islamic State of Iraq and al-Sham (ISIS). The root cause of the problem is the war in Syria that has led to unspeakable atrocities and human tragedies over the last four years. Now Russia has joined the war in full force in a bid to save the Assad regime together with Iran's support of military commanders, militias, intelligence and money. As I discussed before, these recent developments are dangerous and will certainly prolong rather than end the refugee crisis.

The refugee crisis can become an opportunity for closer coordination and partnership between Turkey and the EU to deal with one of the most catastrophic humanitarian situations in recent memory. By helping others we will be helping ourselves.

Presidential spokesperson for the Republic of Turkey
Last Update: Oct 10, 2015 11:20 am