Terror, the Assad Regime and Paris 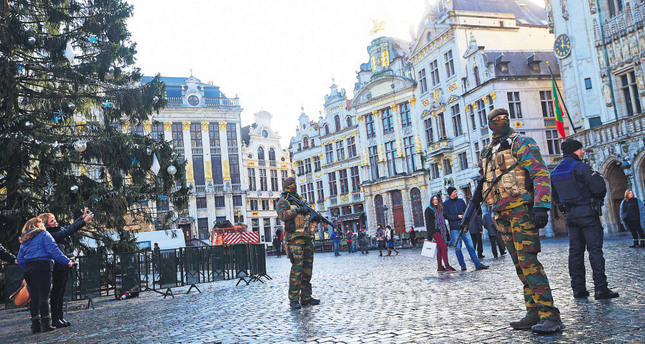 Brussels began a third consecutive day in lockdown under maximum terror alert after Belgian police staged a series of raids but failed to find a key suspect of the Paris attacks.

Half-baked measures will only exacerbate the situation and embolden DAESH and the Assad regime. Syrian people and the world must be rid of these two evils between which we do not have to choose

Voltaire was once asked what he thought about the Holy Roman Empire. His witty response was that "it is neither holy, nor Roman nor empire." DAESH or the so-called Islamic State warrants a similar response. It is neither "Islamic" nor a "state." Rather, it is a terrorist brand that uses the war in Syria to sow chaos and terror in both the Muslim world and Europe.

Confronting DAESH terrorism requires a battle of ideas against extremism but also a battle of facts on the ground. For the last two years, "degrading and destroying" DAESH has been set as a priority. Yet despite the fact that a large number of countries including the U.S., France, Turkey and Saudi Arabia on the one hand, Russia, Iran, Hizbullah and the Assad regime on the other have come together to eliminate this menace from the face of the earth, it is still living, growing and expanding. Is this simply a tactical failure of the anti-DAESH coalition or is there something else here?

There is more than one reason for the rise of DAESH to its current level of monstrosity. Both Muslim and Western countries need to address a multitude of causes for the spread of radical ideas and violent extremism that grows in their midst. But it should also be made clear that the criminal war of the Assad regime in Syria gives every possible excuse and tools DAESH needs to wage its war of terror across swaths of land from Egypt and Iraq to France and Belgium. The growing consensus is that as long as the Assad regime remains in power, DAESH will continue to thrive. This is what the current and the three former presidents of the Syrian National Council, Mouaz al-Khatib, Ahmad al-Assi Jarba, Hadi al-Bahra and Khaled Khojahave made clear: "The haphazard approach to the crisis in Syria has been a disaster. Comprehensive solutions are needed that can end the war in Syria and destroy terrorist groups such as ISIS once and for all."

The "comprehensive solution" refers to a fair and meaningful political transition that will see the exit of Mr. Assad and his coterie of war criminals responsible for the death of more than 300,000 people over the last four years.

Anything short of this will be self-deception. Henry Kissinger's claim that Russian military involvement in Syria together with Iran and Hezbollah may be useful and even needed against DAESH has been proven wrong by Russia's deliberate attacks on moderate Syrian opposition groups over the last four weeks. The Russian-Iranian alliance is more interested in saving the Assad regime than eliminating DAESH.

The Russian game-plan in Syria is based on the assumption that the total collapse of state institutions must be prevented to fight DAESH. As Frederic Hof notes, however, this is unfounded as the barrel bombs and indiscriminate killing of the Assad regime are the main obstacles to the effective fighting of moderate Syrian opposition groups against DAESH in Syrian territories. Assad has already lost control of the country and is using whatever is left of state and security institutions to guarantee his own future. Furthermore, conflating a criminal and brutal regime such as the Assad rule with responsible and legitimate state structures is a political error of the first order. If the newly established Vienna process is to avoid the mistakes of the failed Geneva talks, we need to make it clear that the Assad regime cannot be held up as a responsible state structure.

There is very little that can be achieved without addressing the root cause of the current wave of terrorism on the one hand, and the refugee crisis on the other. Half-baked measures will only exacerbate the situation and embolden DAESH and the Assad regime. Syrian people and the world must be rid of these two evils between which we do not have to choose.

There are further reasons to be concerned about. Abusing the Paris attacks to shore up right-wing supporters in the West plays right into the hands of the terrorists whom populist politicians are supposed to denounce. The post-Paris attack debate already points to a dangerous slide toward ideological hysteria and collective stereotyping.

In the U.S., the Republican presidential candidates have already gone wild with their populist and discriminatory attacks on Syrian immigrants in the name of homeland security. As one commentator notes, their stupidly hawkish and simplistic approach makes George Bush look like a progressive. Despite the fact that the U.S. has a robust vetting procedure and no refugees have been implicated in any terrorist act in years, U.S. lawmakers still passed a law that will make the acceptance of refugees even more difficult. Luckily, President Obama, Hillary Clinton, the mayor of New York and other leaders have denounced the treatment of refugees as potential terrorists as "shameful"' and "un-American."

While many Europeans have shown wisdom and common sense, the abuse of Paris attacks for fear-mongering is a dangerous trend. The racist anti-Muslim groups will continue to vilify and demonize refugees as well as Muslims in Europe only to give more ammunition to extremists and terrorists.

Needless to say, necessary measures must be taken against terrorism. France has extended the state of emergency for three months. A number of restrictions on social media have been introduced in several EU countries. Screening of individuals is expanded. President Hollande prepares to introduce constitutional changes to strip individuals of French citizenship if found guilty of terrorism.

These measures could be justified in the face of terror attacks. But they will be tolerated as long as they do not infringe on civil liberties and freedom of press. Striking a balance between security and freedom is critical but also a delicate matter. Those who criticize Turkey for taking security measures against the PKK and other terrorist organizations can see the larger picture in the global fight against terrorism, which requires global coordination and solidarity.