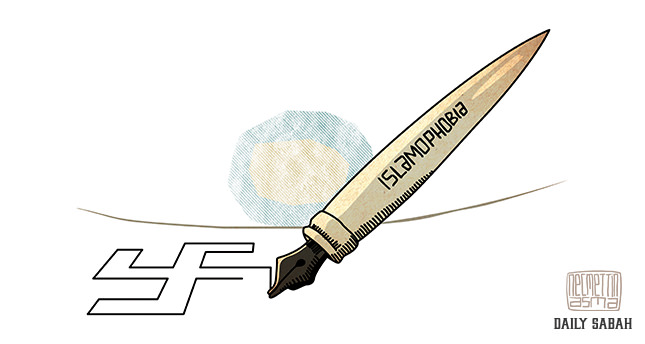 The fanaticism and violence of DAESH, al-Qaida and similar organizations must be rejected on principle, not simply as a matter of political convenience. But so must militant secularism that seeks to justify racism and bigotry in the name of enlightened reason and freedom

One week after the Brussels attack, the French magazine Charlie Hebdo published an English editorial in which it asked: "How did we end up here?" It claimed that "the attacks are merely the visible part of a very large iceberg indeed. They are the last phase of a process of cowing and silencing long in motion and on the widest possible scale." The magazine then goes on to answer its own question by blaming three individuals: French Muslim scholar Dr. Tariq Ramadan, a Muslim woman with a veil and a Muslim baker who refuses to sell pork. How it answers this question reveals much about the inherent hatred and warmongering of militant secularism.

Charlie Hebdo is best known for its irreverent attacks on religion. But it is also known for its attempt to present them as rational criticism. Its tasteless and indecent caricatures of Judaism, Christianity and Islam claim to be based on logical arguments and enlightened critique. Its new editorial goes beyond all this and reaches a new low in anti-Muslim bigotry. It blames the very presence of Muslims in the European public sphere for all that has gone wrong in the old continent.

The militant secularism of Charlie Hebdo commits the very mistake for which it criticizes fanaticism, as it scraps nuance and lumps together all Muslims and people of faith into a category of evil versus the good people of Charlie Hebdo and the company. Instead of making a logical and ethical distinction between mainstream Muslims, who make up the vast majority of the 1.5 billion Muslims worldwide, and the violent extremists rejected by Muslims across the board, it treats Muslims as suspects of radicalism and extremism.

The selection of Ramadan, a nameless Muslim woman with a veil and a Muslim baker down the street is not coincidental and reveals the extent to which militant secularism sees Muslims as responsible for violent extremism and terrorism. This is more than guilt by association. It is blatant bigotry under the veneer of satire, atheism, rationalism and liberal European values.

Ramadan, a Muslim and a European with a commendable knowledge of both worlds, would be honored, I believe, to be associated with the Muslim woman and baker and countless other law-abiding and devout Muslims living in Europe, the U.S. and the Muslim world. So would we. But the selection of these figures shows that Charlie Hebdo is against the very presence of any and all Muslims in Europe as if it can lay such an exclusivist claim to European culture and public space. It seems to dread the normalcy of a Muslim European intellectual, an ordinary Muslim woman and a talented Muslim baker.

Charlie Hebdo thinks it can say this with impunity because its militant secularism claims hegemony over the truth and presents its version of reason and rationality as the only valid path to veritable knowledge and virtue. How is this different from the exclusivist claims of DAESH, al-Qaida, the Ku Klux Klan or neo-Nazis? How can one begin with the assumption that the only way to talk about religion is to attack it as irrational, inhuman or violent? Since when has setting such preconditions become a hallmark of rational thought?

This is not about critical thinking or sound reasoning, but rather militant secularism's self-perception. Claiming to be self-justified, militant secularism conceives of itself as a profane religion and demands absolute submission. It demonizes the other in the name of reason, progress and freedom. It wraps hate speech in the form of freedom to attack anyone and anything. It sees Islam as the last religion standing and so viciously attacks it. Where its proselytizing fails, it denounces everyone as irrational and violent.

The fallacy of militant secularism is further evinced by the fact that modern violence has been caused by secular, nationalistic ideologies more often than religious ideas. Domestic violence and school shootings in the U.S. claim the lives of a staggering number of people every year and almost none has anything to do with religion. Many of them are a result of the culture of modern violence glorified by Hollywood productions, the entertainment industry and recently social media. Since the beginning of the 20th century, nationalism, tribalism, socialism and communism, none of which has anything to do with religion per se, has led to bloody wars that claimed the lives of tens of millions of people in Europe, Africa and Asia. These ideologies have presented themselves as substitutes for religion with nation in place of God, the proletariat in place of faith and the communist state in place of church and monarchy. Modern violence does not need religion to find an extremely common and disturbing place in modern societies.

As for the claim that the Islamophobia debate is used as a tool to obstruct criticism, this is far from being the case. Anyone with a sound mind knows the difference between a reasoned and civic debate about the Islamic tradition on the one hand, and racist attacks on Islam and Muslims, on the other. Islam has an honorable tradition of critical debate through generations of scholars, jurists, philosophers, theologians, Sufis, scientists and artists. While Muslims today have forgotten the depth of this tradition, the fact is that the Quran urges the use of critical thinking, observation and inference and establishes a balance between reason, faith and virtue. One can certainly have a rational and considerate debate about Islam without being bigoted.

Anti-Muslim racism, however, goes beyond logical argumentation and criminalizes Muslims on the basis of their faith and culture. Just as we must discuss bigotry and racism in order to prevent the next attack, we must continue to talk about Islamophobia and anti-Muslim bigotry in order to protect the rights of Muslim individuals and communities who are entitled to fundamental human rights and civil liberties like anyone else. The Islamophobia debate is important to expose those bigots, racists and fascists masquerading as freedom-loving intellectuals and progressives. Charlie Hebdo reiterates the evils of racism without wanting to be called racist. Deliberately or not, it creates an environment very similar to what happed in Germany in the 1930s. We all know what that atmosphere of anti-Semitism and fear-mongering led to.

The fanaticism and violence of DAESH, al-Qaida and similar organizations must be rejected on grounds of principle, not simply as a matter of political convenience. But so must militant secularism that seeks to justify racism and bigotry in the name of enlightened reason and freedom.

Presidential spokesperson for the Republic of Turkey
Last Update: Apr 09, 2016 9:11 am
RELATED TOPICS