Turkey, Europe and the fight against terrorism 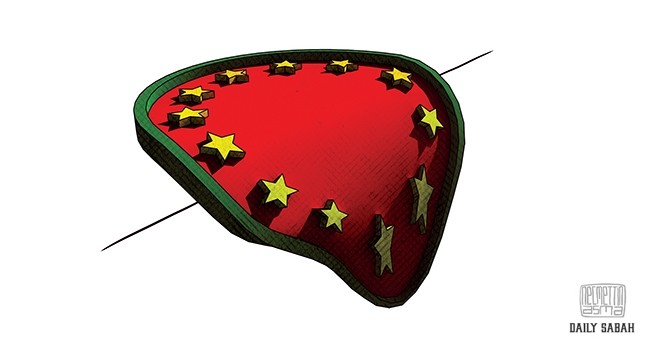 Europeans need to pay more attention to the security challenges Turkey is facing. They concern Turkey as much as they concern Europe

President Recep Tayyip Erdoğan and Prime Minister Binali Yıldırım attended a funeral in the small town of Arifiye in northern Sakarya province on Nov. 12. They were accompanied by ministers, local governors and thousands of citizens. As they paid their final respects to the deceased, the mourning crowds chanted anti-terrorism slogans.

This "minor" event neither made the headlines nor the news in Western media. No European official made any strong statements about the pain and sorrow of the wife of Muhammed Fatih Safirtürk, the district governor of Derik in southeastern Mardin province, who was assassinated by the PKK in his office. No EU committee was convened to investigate and condemn the systematic terror attacks by the PKK and those who support them in politics and the media. No EU ambassador was present at the funeral nor did we hear anyone contacting Safitürk's family to express their condolences.

This is the repeat of an alarming pattern that has been in the making for several years. European officials make half hearted statements to condemn PKK attacks but say nothing about those who support them directly or indirectly. They spend more time criticizing the government for taking action against those who seek to justify and glorify PKK terrorism rather than providing concrete help. They find it inconvenient to talk about the fact that the Peoples' Democratic Party (HDP) members of the Parliament and their media outlets never condemn PKK terrorist attacks, car bombs, suicide bombings and targeted assassinations. They say that the EU considers the PKK a terrorist organization but allow PKK operatives and propagandists in Europe to work for the terror group, collect money, recruit terrorists, propagate its ideology and lobby for its interests in national assemblies and in Brussels. Every time Turkish citizens see PKK flags in the European Parliament and in the streets of European capitals, they draw conclusions that upset Europeans. Who is to blame here?

U.S. President Barack Obama's administration is no different when it comes to supporting the PKK's Syria branch, Democratic Union Party (PYD) and its armed wing, People's Protection Units (YPG), in the name of fighting Daesh. Despite the fact that you cannot defeat terrorism with another terrorist organization, the U.S. government continues to supply weapons, ammunition, training and intelligence to the PKK's branch in Syria. But there are legitimate Syrian opposition forces to fight against the twin monsters of the Syrian war, i.e., the Assad regime and Daesh. Turkey's Operation Euphrates Shield, which began on Aug. 24, has proven that there is a more effective and legitimate way to confront Daesh terror than giving weapons to forces whose loyalty lies not with the Syrian people but with the PKK and its command center in the Qandil Mountains.

When Europeans criticize the detention of HDP deputies and make fiery statements without serious fact-checking, they simply reinvigorate the perception that Europe has double standards on terrorism. The fact is that other deputies whose immunities were lifted went in to give their statements without challenging court orders. But the HDP deputies openly defied the courts and refused to condemn PKK attacks.

By standing with those who whitewash terrorism in the name of freedom of expression, European politicians seek to impose a principle on Turkey that they would never allow in Europe. Could you imagine EU political institutions and national assemblies allowing deputies to defend al-Qaida or Daesh, glorify their terrorist acts and defy court orders?

It is useless to condemn terrorism without taking concrete action. And it is hypocrisy to criticize Turkey for doing what most Europeans would have done in their own countries. A clear example is the case of the neo-Nazi and fascist Golden Dawn Party in Greece, which entered the Greek parliament in 2012, getting 6.9 percent of the votes and becoming the third largest party. In 2013, its chairman and several deputies were presented with criminal charges including murder and put in pre-trial detention. If found guilty, they would serve a prison sentence. We have not seen any EU official criticizing the Greek government for taking action against this political party. In the case of Turkey, the charges are even heavier as they are related to providing support to terrorism. It is Turkey's right to expect its European and American allies to stand by it against terrorism.

There are other troubling cases that reinforce this double standard. After the bloody July 15 coup attempt, which resulted in the killing of more than 240 people, the government went after the coup plotters. European officials said one thing to condemn the failed coup attempt and nine things to criticize the government for bringing the putschists to justice. Has Europe offered any help? Nine coup soldiers fled to Greece and they are still there. Tens, if not hundreds, of Gülenist suspects fled to various European countries. Has any European country returned them despite arrest warrants? Has any one of them shared any intelligence on the PKK or the Gülenist structures in European cities? Even when it was a fashionable thing to do to accuse Turkey of allowing foreign terrorist fighters into Syria, very few European countries did their homework, shared intelligence and controlled their own citizens before turning the tables against Turkey.

To the contrary, they are busy giving accolades to those charged with criminal acts in Turkey. The German president would not dare host a convicted citizen of another country such as the U.S. or France at his presidential palace. The German government would never consider giving a temporary passport to Eric Snowden, who is accused of leaking government documents to Wikileaks and who is still in hiding in Russia. But they can do so with regards to Turkey. Europeans think that they are free to invite PKK supporters to their meetings to "explain" what is happening in Turkey and then write "progress reports" based on them. Then they threaten Turkey with suspending EU talks or imposing sanctions. When Turkey reacts to this entrenched double-standard, it is labeled as authoritarian, intolerant, aggressive, et cetera, et cetera.

What people see and what they know is that Muhammed Fatih Safitürk, the district governor of Derik, was assassinated by the PKK, leaving behind a mourning widow and a child. The next day PKK media outlets praised the attack. No condemnation of these statements by European officials.

This is a troubling trend and must be reversed. Otherwise, Europe will lose an entire nation. Turkey considers joining the EU as a strategic goal. In a world of growing interdependence, Turkish-European relations are key for regional security and global stability. Turkey has friends in Europe and within the EU and they should speak out and correct Europe's record on this score. The visa liberalization process, as it was agreed back in 2013, should be finalized without further ado. The EU should fulfill its financial responsibilities as part of the Turkey-EU migration deal. Accession talks should be expedited and new chapters should be opened and closed.

Europeans need to pay more attention to the security challenges Turkey is facing. They concern Turkey as much as they concern Europe.

Presidential spokesperson for the Republic of Turkey
Last Update: Nov 16, 2016 10:40 am
RELATED TOPICS