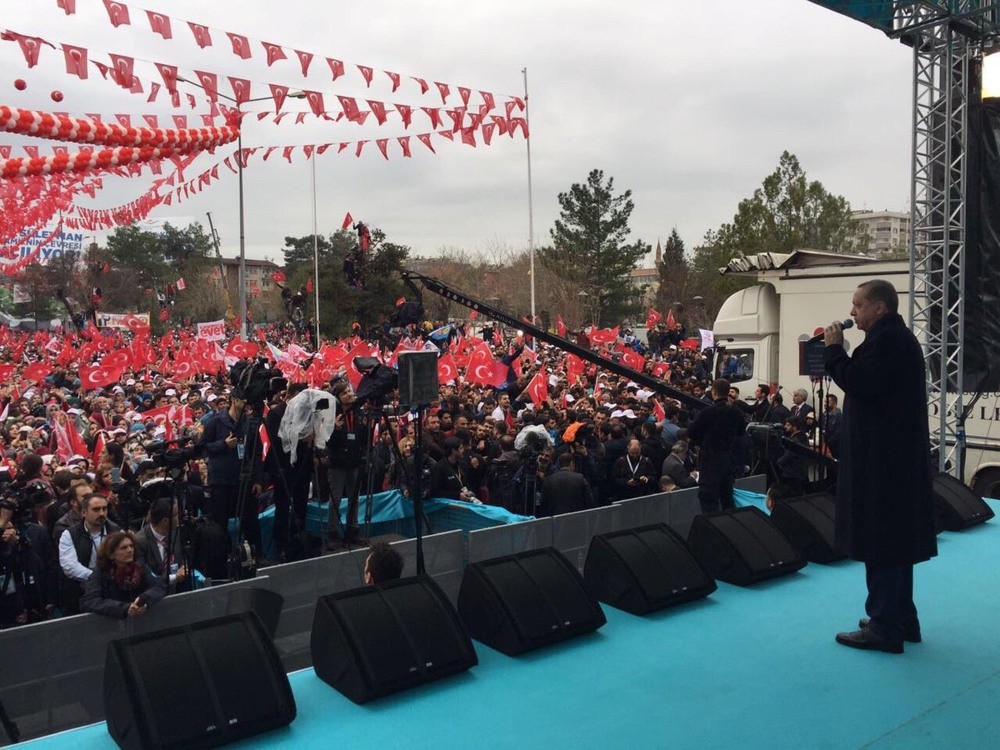 President Recep Tayyip Erdou011fan speaking at an inauguration ceremony in the southeastern province of Dikaybaku0131r, March 30.
by İbrahim Kalın Apr 04, 2017 12:00 am

President Recep Tayyip Erdoğan's visit to Diyarbakır on Saturday took place against the background of a political history wrought with opportunities and challenges. His message of embracing the Kurds as equal citizens of the Republic has important implications beyond the April 16 referendum.

Ever since his first visit to Diyarbakır in 2005, President Erdoğan has taken steps unrivaled by any other political leader in modern Turkish history. He has recognized the Kurds as an equal and important component of the Turkish nation and made a clear distinction between the Kurdish community and the PKK. He implemented reforms to lift the ban on the Kurdish language in the media, political campaigns and other areas of life. He presented the ballot box and Parliament as an alternative to PKK terrorism. As prime minister, he invested millions of dollars to improve the living standards of predominantly Kurdish towns and cities. Embracing the Kurds as equal citizens has been a key part of Erdoğan's political legacy.

Speaking in Diyarbakır, President Erdoğan said that "we are ready to talk and walk with anyone who has something to say and a project to implement. Our only condition is that they shall not carry guns nor seek to divide the country and the nation." Ever since the PKK unilaterally ended the peace process in 2015 and the Peoples' Democratic Party (HDP) squandered its role as a potential political actor, the president has been saying that he will reach out to the Kurds themselves, including community leaders, political figures, ordinary citizens, businessmen, NGOs and others, to address their issues.

Indeed, the Kurds cannot be left to the mercy (or lack thereof) of the PKK and its oppressive Marxist-Leninist ideology. The PKK is listed as a terrorist organization by the European Union and the United States, and best known for its barbaric terrorism not only against the Turkish state but also against Kurds who do not subscribe to their ideology. The HDP committed political suicide by opting to support the PKK's "trench politics" and put at its service the budget, the facilities and the staff of municipalities it had won in the 2014 local elections. Their actions were not only illegal but also a major blow to the HDP's political legitimacy. Most Kurds are disillusioned with both the PKK and the HDP, and want peace, security and prosperity as opposed to oppression.

This is exactly what the president promised in Diyarbakır. "Just as we cannot imagine Turkey without Istanbul, Izmir, Trabzon, Antalya and Erzurum, we cannot imagine Turkey without Diyarbakır," he said. The Turkish Republic is as much the state of Turks, Arabs and others as it is of the Kurds. He made it clear that while anti-terrorism operations continue, there will be no rollover from upholding and protecting the rights of Kurdish citizens. Despite the state of emergency declared after the July 15 coup attempt, there has been no change in the implementation of reforms that the Kurdish citizens enjoy today. The government is investing, among others, millions of dollars in the Sur district of Diyarbakır to rebuild areas destroyed by the PKK terrorists.

President Erdoğan rejects the PKK's dirty politics of talking about peace while holding a gun. He rejects the HDP's pretension to be a voice for the Kurds when it speaks first and foremost for the PKK. The reality is that the HDP has never shown the courage to question and reject the PKK during and after the peace process initiated by Erdoğan himself.

No government would accept any political interlocutor that seeks to grant legitimacy to armed struggle by supporting the PKK while enjoying the privileges of parliamentary politics. This is like acquiescing to the demands of the IRA in Northern Ireland, ETA in Spain or FARC in Colombia to continue armed struggle while calling for political recognition or peace.

Saving the Kurds from the PKK means not only recognizing their rights and elevating their living standards but also protecting them from the violence and oppression of the PKK. Most Kurds in Diyarbakır, Hakkari, Şırnak and other Kurdish-populated cities say that they support the recent security measures taken against the PKK and its urban militants because it gives them a sense of normalcy and hope for the future.

Those European governments that give a free ride to the various PKK installments in their countries and seeking to use them against Turkey are not only violating their own principles but also engaging in a self-defeating strategy. The U.S. administration is making the same mistake by supporting the PKK's Syria branches the Democratic Union Party (PYD) and the People's Protection Units (YPG) in the name of fighting Daesh. It is no secret that the PKK is using the Syrian war as a tool for its regional ambitions. The policy of supporting the PKK and its various outlets in Europe or in Syria will have serious consequences for regional peace and security.

Meanwhile, the vast majority of Kurds are sick and tired of being seen as pawns to be used by foreign actors against their own country. They are fed up with the Western media that takes only the PKK and HDP mouthpieces seriously and dismisses their anti-PKK stance. They reject the image of the Kurd as a Marxist-Leninist ideological tool at the hands of foreign agents seeking proxy wars. They abhor those who promote the PKK's political agenda in the name of the Kurds.

The polls suggest that Kurdish voters support the constitutional referendum in higher numbers than expected. This is natural given that they see the benefits of the proposed system that will end the period of weak coalition governments, energize the economy and establish a strong system of checks and balances.

Erdoğan's message of embracing the Kurds as equal members of the Republic has characterized his policy since 2003 and remains important for both the April 16 referendum and beyond.