Is a harmonious world order possible? 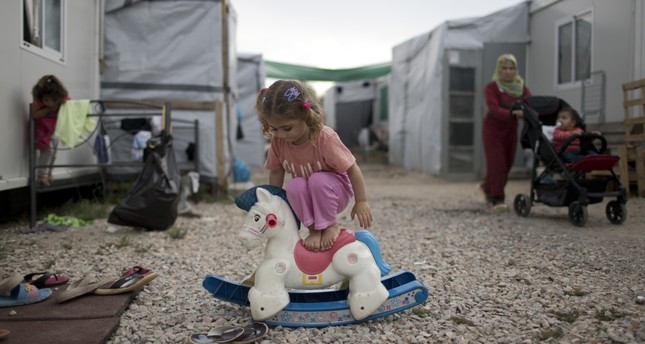 A Syrian child playing with a plastic toy horse at the Ritsona refugee camp about 86 kilometers north of Athens, May 25.

We will not be able to establish political order and economic equality unless we establish the principles of harmony, peace and beauty within our own souls in the first place

President Recep Tayyip Erdoğan traveled to five prominent countries in the last five weeks, visiting India, Russia, China and the United States and attending the NATO Summit in Belgium. Discussions were as much about bilateral and regional issues as about finding ways to bring a degree of order, peace and stability to the current international system saddled with chaos and disorder. From Ankara, New Delhi and Moscow to Beijing, Washington, the European capitals and the rest of the world, there is a genuine concern about the direction of our world beyond the Syrian war, international terrorism, the rise of populist and racist movements and global warming.

The current state of chaos and disorder at the global level has many political and economic causes. The power disequilibrium that pits nation-states against one another easily creates tensions with far-reaching consequences. The Syrian civil war is a case in point. In its sixth year, the conflict has claimed hundreds of thousands of lives and has become the most catastrophic war of the 21st century. The war does not end because rival powers need (and therefore sustain) a proxy war in the Levant to advance their interests and agendas.

Meanwhile, the problems of poverty, corruption and inequality in Africa remain unresolved not because they are intractable, but because Africa is used as a continent of spoils and cheap labor to keep the wealthy nations of the world rich and secure. One of the worst refugee crises in recent history cannot be addressed in a way that befits human dignity because the powerful do not want to see it as a problem unless it reaches their doorsteps. The gap between the rich and the poor keeps growing not for a lack of feasible solutions but because there is no desire to settle on a solution that will require a fundamental change in our way of life and attitude towards the variegated inhabitants of the world different than us.

Richer than ever and more connected and sophisticated than any other period in human history, our world suffers not from a lack of scientific studies or reasonable alternatives but from a deeper problem: loss of meaning, purpose and direction on a global scale. The disorder and chaos that we see in the current global system is in reality a reflection of the disharmony and the discord that lies at a deeper level of who we are and what we want to be.

The ancient wisdom holds that we cannot establish peace and harmony in the outside world until and unless we realize them within ourselves first. Harmony in the soul and the world gives us a cosmic order in which balance, order, proportionality, fullness and integrity shape our human habitat and thus establishes peace and complementariness between heaven and earth, between us humans and the universe.

It is with this caveat in mind that Plato built his philosophical and political edifice on the central concept of harmony. The task of the philosopher is to show the essential harmony and accord that exists between the soul and the world. Wisdom is the art of discovering and maintaining this balance at all levels of existence and consciousness. Plato assigns a central role to music in his ideal state for it helps us learn and internalize harmony, structure, order and rhythm - the key components of any good music. The challenge is to conform to the principles of harmony and beauty without giving up on our agency and freedom.

Harmony, however, is not simply a term of aesthetics. It is ontologically grounded in truth and justice. No system based on falsity and evil can sustain order and balance. Likewise, justice is key to maintaining peace and harmony in society as it essentially means "putting everything in its proper place and giving each thing its due." A society is harmonious when everyone plays his/her part in it in a way that corresponds to truth and justice on the one hand, and preserves our freedom on the other. The human body becomes one harmonious and orderly system when each of its parts functions in the way that is proper to it.

In the Islamic tradition, peace (as-salam) and harmony (al-mizan) form the backbone of the world of creation. They serve as the basis of the cosmic order that holds the universe together. But they also serve as guidelines for our inner life. By contrast, disharmony breaks the unity and fullness of being, leading to internal strife and friction. At the socio-political level, it causes friction, war and injustice. At the individual level, it leads to discomfort, pain and suffering.

Beauty is directly related to peace and harmony. According to the Quran, God created the universe in a certain "order" and with a certain "lot" (qadr). This forms the basis of the harmonious beauty that we see in the universe. The Quran challenges us to look at the universe and find discordance, inconsistency and/or disharmony in it (Surat al-Mulk 67/1-4). Humans are part of this cosmic order and expected to reflect its harmony and beauty in their inner life. Violating the cosmic principles of peace, order and harmony brings decadence and corruption to the human soul and destroys the human habitat.

The chaos, disorder and destruction that we see in the current world system today cause so much more pain and suffering than it can be justified by any explanation. Its socio-political and economic causes must be addressed with political will and wisdom. But we also have to see the deeper causes of this state of affairs that dwarf our hope for the future of our planet and the integrity of our humanity. The simple truth is that we will not be able to establish political order and economic equality unless we establish the principles of harmony, peace and beauty within our own souls in the first place.