The age of terrorism and hypocrisy 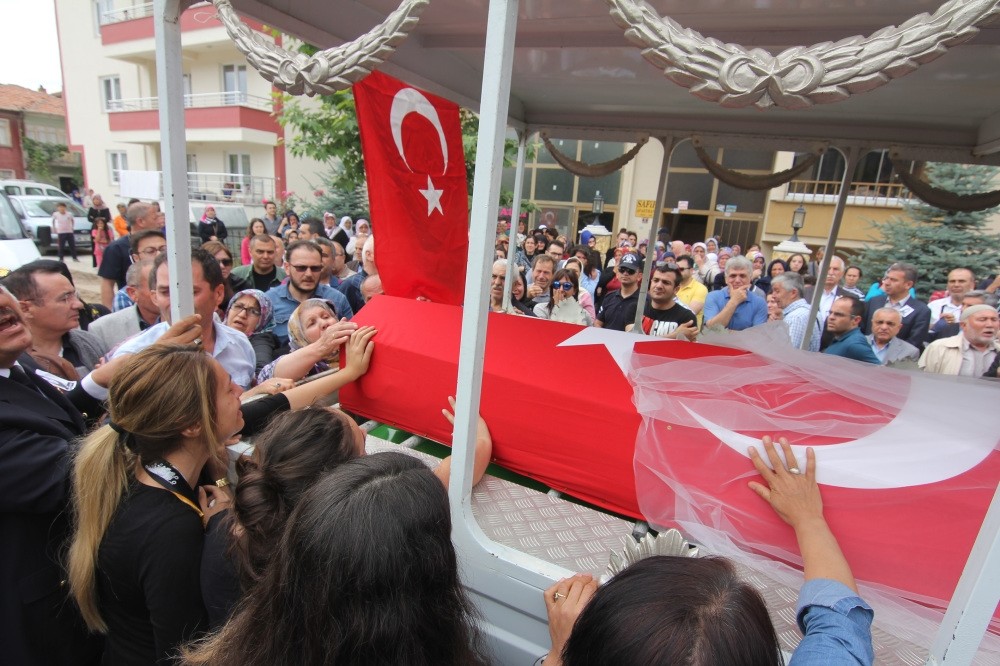 People flocked the streets at the funeral ceremony of the 22-year-old music teacher, u015eenay Aybu00fcke Yalu00e7u0131n, who was killed by a PKK terrorist attack in Turkeyu2019s southeastern city of Batman where she was appointed to a public school last October.
by İbrahim Kalın Jun 14, 2017 12:00 am

The world is ignoring the tragic death of a young music teacher, Ms. Yalçın, who became another victim of the PKK terrorists, once again reminding us we live in an age of terrorism and hypocrisy with double standards

On June 9, a group of PKK terrorists in the eastern Turkish city of Kozluk-Batman loaded a stolen vehicle with explosives, fired shots at mayor Veysi Işık's automobile and detonated the car bomb near a gendarmerie checkpoint. Mr. Işık, a local politician, survived the attack but the bullets fired by the terrorists struck a nearby vehicle and claimed the life of 22-year-old music teacher Şenay Aybüke Yalçın. Specialized Sgt. Soner Fazlıoğlu also lost his life in the same attack.

The PKK's latest terror attack was hardly covered by the international media. With the exception of Daily Sabah and a handful of Turkey-based English-language news outlets, the world ignored the tragic death of a young girl because it didn't fit the narrative about the PKK or its Syrian franchise, the People's Protection Units (YPG). Nor did we see any statements of condemnation or expressions of sympathy from those who miss no opportunity to whitewash the PKK and preach to Turkey about the virtues of dialogue and negotiation in the fight against terrorism – advice that they would never give to Western governments to fight Daesh or al-Qaida terrorism. This is another reminder of the fact that we live in an age of terrorism and hypocrisy with double standards we have hardly seen anywhere else in recent history.

The PKK has a long history of targeting teachers, civilian politicians and other non-combatants. Since 1984, the group has claimed responsibility for the deaths of more than 150 school teachers. Their attacks against teachers have been part of a broader effort to undermine state authority, deny mostly Kurdish children educational opportunities and to discourage other teachers from taking jobs in eastern and southeastern cities. Some of the most traumatic PKK attacks, in fact, targeted teachers and educators. In September 1994, on the first day of school, PKK terrorists abducted six public school teachers from their homes in Tunceli to execute them at the town square – which they forced the local population to watch. A month later, four other teachers were assassinated by PKK terrorists in Tekman, Erzurum. No doubt these facts are reported in some fashion. But they never reach the level of a sticking story because they spoil the hypocritical narrative of the good PKK terrorists-humanists-freedom-lovers fighting against Daesh.

The PKK has perpetrated a large number of attacks against unarmed security forces, who are considered non-combatants under international law. Among others, in May 1993, PKK terrorists murdered in cold blood 33 unarmed soldiers on the Bingöl-Elazığ highway in eastern Turkey. In a December 2016 car bomb attack against the military barracks in Kayseri, at least 13 soldiers were killed while another 36 survived the assault with injuries. The PKK propaganda outlets published in places like Germany and Austria praised the attack. When we raise this issue with European officials, they hide behind the freedom of expression. Since when can media freedom be abused to spread terrorist propaganda? Will Western governments allow the glorification of terrorism under any pretext?

Absolutely not. Furthermore, they would tighten security measures to protect their citizens as they have done, rightly so, after every terrorist attack in Europe and the United States. This is their right and no one should blame them. But why do we face these double standards and hypocrisy when it comes to Turkey's fight against terrorism? In many ways, this is the typical "bon pour l'orient" attitude. Eurocentrism is still very much alive in the arteries of the current world system. In this mindset, terrorism is a very bad and urgent global problem when it hurts western interests. It is a lesser issue when it shows its ugly face elsewhere. But this is a self-defeating approach. We live in an age of growing interdependence and no one is safe in this precarious world until everyone is safe. The recent history of terrorism should have taught us this lesson at least.

In recent years, the Western media presented PKK/YPG terrorists as role models. In October 2014, as clashes between Daesh and the YPG continued in Kobani, French magazine Marie Claire came under fire for publishing pictures of child soldiers, aged 12 and 14, fighting among YPG ranks. Acknowledging the ages of the "soldiers," the magazine's editors described the two children as influential figures. But the coordinated campaign to whitewash the PKK's crimes and give the terrorists a new image continues unabated. In a March 2017 piece, The New York Times refrained from making any references to the PKK and talked about two terrorist campaigns in Turkey: "One led by secular Kurds, the other by Islamic State extremists." In another case, the PKK was portrayed as a safeguard of gender equality because the group's senior leaders were willing to send both men and women to kill innocent people.

The coverage of Ms. Yalçın's death, or lack thereof, is alarming to say the least. Just because the world doesn't want to see that the PKK terrorists kill, harass and oppress anyone in their way doesn't make the victims less real or the crimes less grave. To make matters worse, this is the same group that controls large parts of northern Syria and commits, according to Amnesty International and others, war crimes against non-Kurds and members of rival Kurdish groups by forcing them to leave their lands, imprisoning them at will, or worse. Again, some of these facts are reported in some fashion in western media outlets. But they never become an overarching narrative and a story that sticks and gets repeated a million times in countless media outlets and political circles.

In the meantime, young teachers like Ms. Yalçın, who put a big smile on her Facebook account to celebrate her appointment​ to a public school in Batman last October, continue to risk their lives in order to give thousands of disadvantaged children an opportunity to build a brighter future. It is a moral responsibility to protect their legacy and cherish their memory against the hypocrisy of the discourse of terrorism.

Presidential spokesperson for the Republic of Turkey
Last Update: Jun 14, 2017 1:03 am
RELATED TOPICS