Barcelona attack and the fight against terrorism 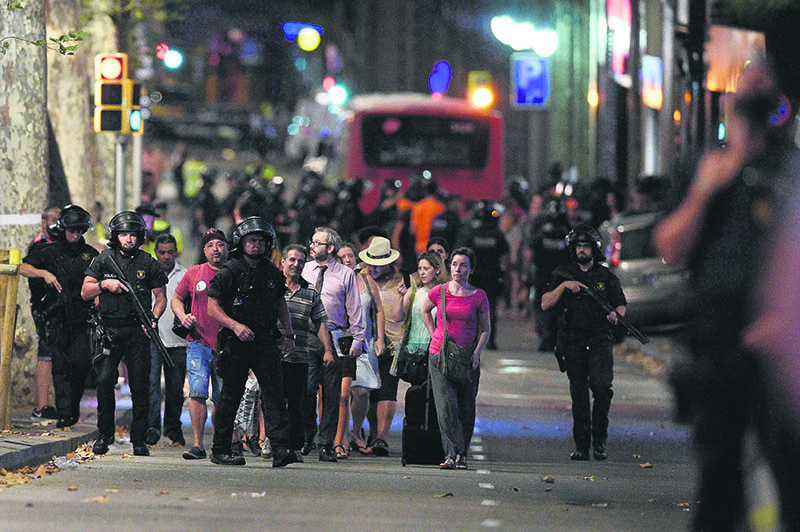 Police accompany people outside a cordoned off area after a van ploughed into a crowd, killing 13 and injuring more than 100 on the Rambla in Barcelona, Aug. 17.
by İbrahim Kalın
Aug 19, 2017 12:00 am

On Thursday, Aug. 17, a van plowed into a crowd of mostly tourists in the popular Las Ramblas district of Barcelona, Spain and claimed the lives of 13 innocent people and injured more than 100 individuals from 24 countries. Over the following hours, the local police arrested at least three suspects, while another five terrorists were shot dead by law enforcement agents.

The Barcelona attack was the latest in a series of assaults by terrorists using vehicles to target innocent civilians. Since the July 2016 attack in Nice, which claimed 86 victims on the renowned Promenade des Anglais, terrorists have carried out similar attacks in Paris, London, Berlin and Stockholm.

In the wake of the Barcelona attack, the world once again expressed solidarity against terrorism. Along with other world leaders, President Recep Tayyip Erdoğan offered his condolences to King Felipe on Thursday evening and condemned what he described as "an assault against not just Spain but the shared values of humanity." In a written statement, Prime Minister Binali Yıldırım pledged to continue Turkey's cooperation with Spain, our friend and ally, in the war on terror. Turkey stands in full solidarity with Spain in this difficult moment.

The Barcelona attack sent shockwaves around the world and reminded us all once again that no country can combat terrorism alone. International cooperation and a genuine commitment by all governments to fight against all forms of terrorism are the key to success in this area. In this age of globalization and growing interdependence, we all have to remember the fundamental fact that nobody is safe until we are all safe. No country can claim immunity from terrorism. Yet irresponsible politics and populism get in the way of meaningful progress in this area since certain countries make a false distinction between "good terrorists" and "bad terrorists."

The Turkish people know such double standards all too well, since the world has been turning a blind eye to acts of terrorism by the PKK, which Turkey, the United States and the European Union consider a terrorist organization. The support for the PKK's Syrian affiliate Democratic Union Party (PYD) and its People's Protection Units (YPG) militia is justified on the grounds that this group fights Daesh terrorists in Syria. But the reality is that you cannot fight a terrorist organization with another one. Furthermore, any and all support given to the YPG is also a support given to the PKK directly or indirectly. The great irony here is that the PKK is a Marxist-Leninist organization and now trained and supported by the United States.

The PKK's constant terrorist attacks get little or no coverage in the Western media because, one is propelled to think, they do not target western interests. Last week alone, the PKK killed Eren Bülbül, a 15-year old from the Black Sea region, along with several security forces. We have not heard any foul cries or strong protests from Western politicians or the media. Why?

While Muslims around the world are expected to publicly condemn acts of terrorism after every assault, it is crucial for the rest of the world to respond to terror attacks in a responsible and constructive manner. Dehumanizing Muslims only aggravates their alienation and paves the way for radicalization. The decision by U.S. President Donald Trump, for example, to invoke the now-debunked myth that Gen. John J. Pershing had dipped 50 bullets in pigs' blood and executed 49 rebels in the Philippines before letting the only remaining insurgent live to tell the story, was odd to say the least. Historically speaking, this event never took place. But more importantly, invented facts cannot be our response to terrorism in the 21st century.

This antagonistic and totalizing approach plays right into the hands of the terrorists we are fighting against. Needless to say, an entire religious community comprised of 1.5 billion people spread all across the world cannot be reasonably held responsible for the actions of a handful of heretics and violent extremists – who do target Muslim communities in order to pursue their deviant agenda. As a matter of fact, Daesh, al-Qaida and other terrorist organizations have killed far more Muslims than non-Muslims and caused more destruction in Muslim countries than in other parts of the world. But the extreme right wing groups and Islamophobes conveniently ignore these facts to incite hatred and animosity toward Muslim individuals and communities in the West.

Sadly, this makes ordinary Muslims victimized and violated twice: on the one hand, they are killed by these terrorists in their home countries. On the other hand, they are accused of violent extremism and thus subjected to discrimination, racism and Islamophobia. How can this help our fight against terrorism?

Terrorism is a global phenomenon and requires global partnership and cooperation. But it also requires consistency in approach and resilience in execution. It is a political and moral failure to distinguish between good terrorists and bad terrorists in the name of national interest or global ambitions. No national interest can be protected if we fail to unite against terrorism in all of its forms.