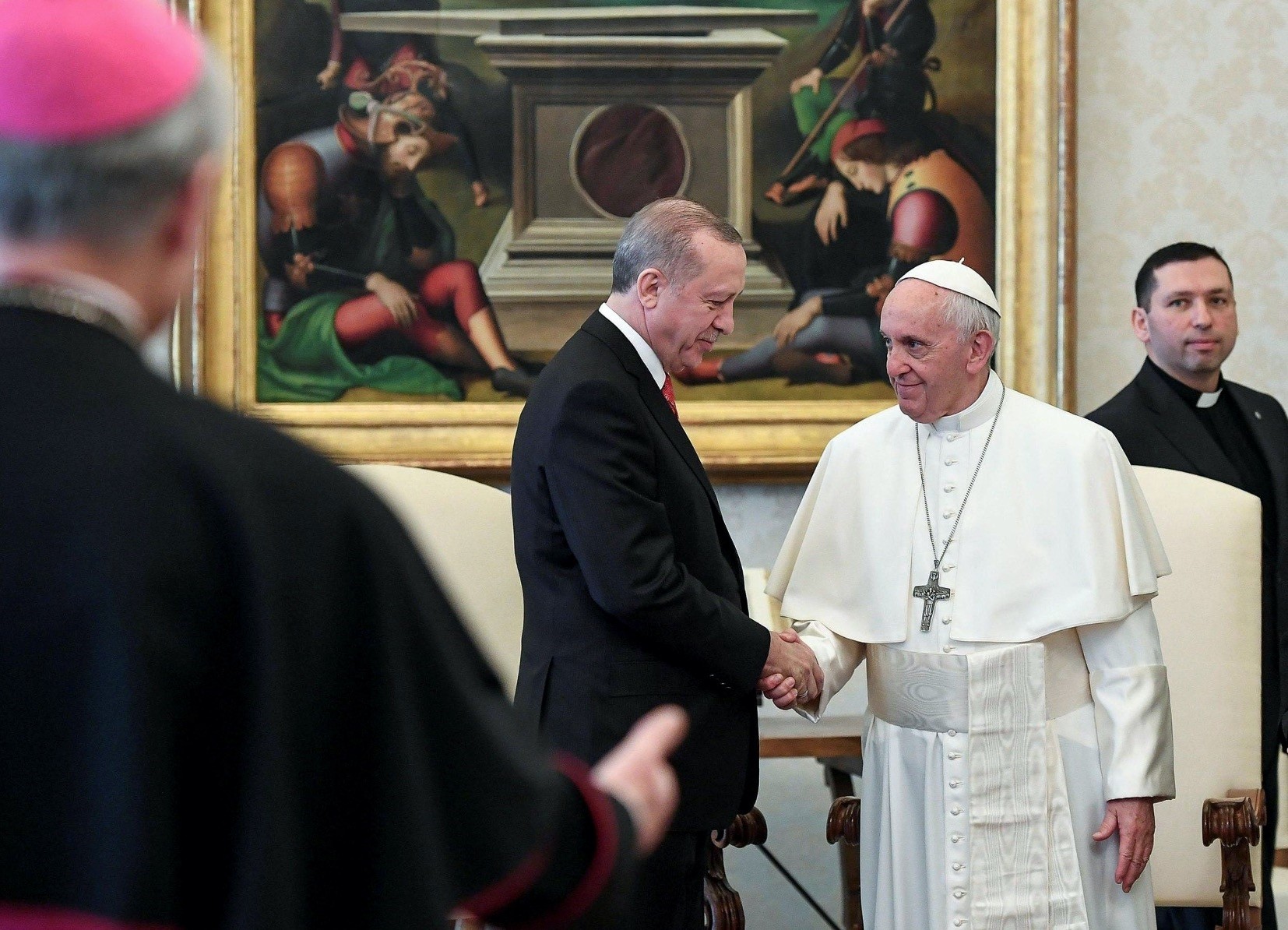 President Erdoğan's meeting with Pope Francis should be welcomed as an important opportunity to work for a common agenda of peace, security and friendship in a world of growing racism, intolerance, ignorance and violence

President Recep Tayyip Erdoğan paid an official visit to the Vatican on Feb. 5, becoming the first Turkish president to visit the seat of the Catholic world in 59 years. The visit came after the U.N. General Assembly vote on Jerusalem and turned an important page in the relations between Turkey and the Holy See. The issues that the two leaders discussed cover practically all of the world's most urgent issues.

Pope Francis visited Turkey in 2014. He was the first head of state that the president received when the new Turkish Presidential Complex was built. The discussion then was both cordial and substantive.

The two leaders discussed a number of issues including Jerusalem, Muslim-Catholic relations, the Syrian war, the refugee crisis, terrorism, xenophobia and Islamophobia. Turkey has been a leading voice on both the Syria crisis and the rising tide of racism and xenophobia.

Since assuming his new post, Pope Francis has projected a different type of apostolic leadership: Warm, communicative, open minded and straightforward. While dealing with the internal issues of the Catholic Church, he has also embraced a global agenda of spirituality with firmness on issues of social justice. For instance, he has spoken out against racism and discrimination and voiced concern over the plight of the Rohingya Muslims in Myanmar.

The Vatican's clear and firm stance on Jerusalem was welcomed across the Muslim world and brought Muslims and Catholics closer. This is not surprising because Jerusalem is also a holy site for Christians and they cannot accept a unilateral decision by the United States and Israel to change its historic, religious and diplomatic status.

Muslims and many Christians, especially those living in Arab and Muslim countries, see the Israeli occupation of Palestinian lands as the root cause of the problem in the Holy Land. The misguided Jerusalem decision by the U.S. administration is just one part of the problem. The ever-expanding settlements, the oppression and dispossession of Muslim and Christian Palestinians and the issue of the right of return for Palestinian refugees continue to undermine any efforts to achieve a fair and lasting peace in the Middle East.

Turkey sees the Palestinian issue not as one of religion, race or land, but justice. The only solution that will bring peace, security and stability to Muslims, Christians and Jews is the full implementation of the two-state solution – a solution that has global support but lacks the wheels to move forward.

Syria and the refugee crisis concern Turkey, the Catholic Church and the larger Muslim and Christian worlds. Turkey has carried the main brunt of the Syrian war in its seventh year. The refugee crisis has affected all neighboring countries as well as Europe. Like others, Christians from Syria have also been subject to the horrors of the war and the atrocities of the Syrian regime and the Democratic Union Party (PYD)/People's Protection Units (YPG) terrorists that kidnap the children of the Aramean/Syriac Christians in northern Syria to fight in their ranks against Turkey.

Pope Francis' messages of inclusiveness and openness to others are of particular significance against the backdrop of the rising tide of far-right movements and racist trends. Discrimination against any religious or ethnic group is also a threat to the safety of others because once the wheel of racism begins to turn, there is no way to stop it as there are serious consequences for all groups. The fact that political and physical attacks on peaceful Muslim communities in the West are presented as the "new normal" should be alarming for Muslims and non-Muslims alike. This is how anti-Semitism in Europe got out of control and turned into a shameful episode in modern history with the rise of Nazism and the crimes of the Holocaust.

The Pope has shown that he has a moral and political responsibility to reject new forms of racism and Islamophobia. This should be welcome by all Muslims. Likewise, Muslim political and religious leaders have a responsibility to protect Christian communities living in Muslim countries against any attacks and provide them with a sense of belonging and friendship. This is what Turkey seeks to do with its small but vibrant and peaceful Christian community as the government has taken a number of measures to protect the religious rights and properties of Christian (and Jewish) communities in Turkey.

The simple truth is that Muslims, Christians, Jews and peoples of other faiths and no faith must join forces against all forms of racism, xenophobia and discrimination.

President Erdoğan's meeting with Pope Francis should be welcomed as an important opportunity to work for a common agenda of peace, security and friendship in a world of growing racism, intolerance, ignorance and violence.

Presidential spokesperson for the Republic of Turkey
Last Update: Feb 10, 2018 1:36 am
RELATED TOPICS