What does Turkey expect from the US? 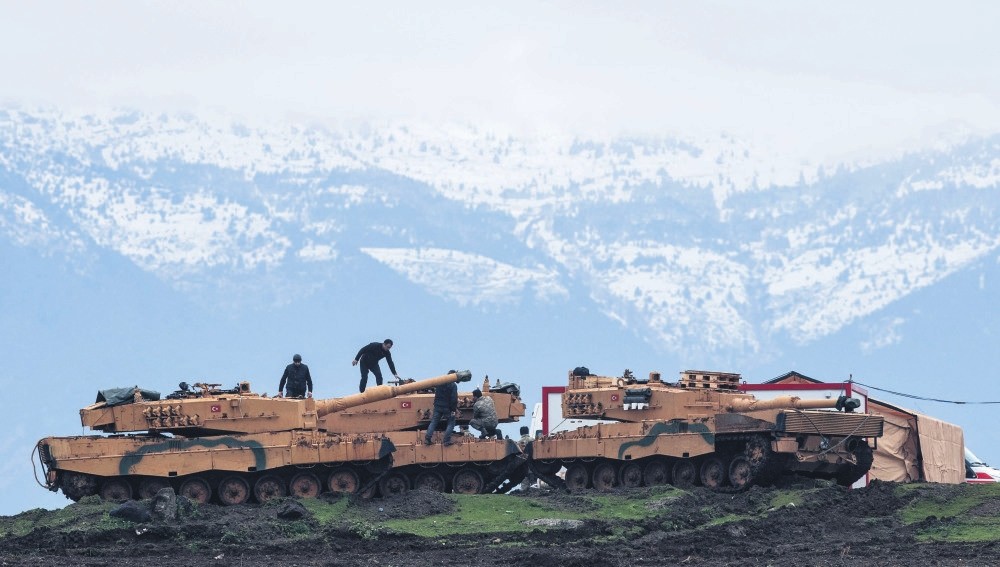 The decades-long relationship between Turkey and the U.S. will be irreparably damaged unless Washington takes steps regarding to the PKK, its Syrian offshoots and FETÖ

Recent meetings between Turkish and U.S. officials should be turned into an opportunity to overcome the crisis of trust – a crisis that has emerged as a result of the U.S. policy of supporting the PKK's Syrian affiliate, the Democratic Union Party's (PYD) People's Protection Units (YPG) militia and inaction on the Gülenist Terror Group (FETÖ) network in the U.S.

In its fourth week, Turkey's Operation Olive Branch launched against the YPG terrorist network in Afrin continues as planned. The goal is to clear northern Syria from all terrorist elements including Daesh, the PKK, PYD, YPG, al-Qaida and others. The goal of all stakeholders involved in the seven-year Syrian war should be to clear the country from all terrorist threats, keep Syria together and help the political transition process for a legitimate and inclusive government.

All countries say that they agree with these goals. But their actions on the ground tell a different story. Since Barack Obama's presidency, the U.S. administration has said that once the Daesh threat was eliminated, they would no longer support the YPG. Now under pressure from Ankara, they also say that they would start disengaging from the PKK's Syrian branch. Renaming the YPG as the Syrian Democratic Forces (SDF) has not fooled anyone. As a matter of fact, U.S. intelligence services refer to the YPG as the PKK's militia force in Syria.

Ankara's priority and expectation is for the U.S. to stop training and arming a terrorist group that has waged a bloody war against Turkey for the last 30 years. The Turkish public is angry and justifiably asks the simple question of how a NATO ally can support our enemy. There was never any justification for empowering the YPG in Syria in the name of fighting Daesh. This goal could have been achieved by other means. The Obama administration made a strategic mistake and President Donald Trump's administration has continued on this misguided track. It is time to change course and work with allies rather than terrorist groups.

Turkey's priority is to end the bloody seven-year war and work out a political transition that will lead to the establishment of a free, stable, peaceful and prosperous Syria. But this cannot be achieved if the countries involved start another proxy war in the Levant. Unfortunately, this seems to be what is happening at the moment. The issue for the U.S. is no longer defeating Daesh or keeping Bashar Assad in power for Iran, but rather grabbing geo-political positions in Syria. U.S. officials do not hide the fact that they will stay in Syria for the foreseeable future as a countervailing force against Iran. Thus, Syrian territories are turning into a proxy war scene between the U.S., Israel and some Gulf countries on the one hand, and Iran, Russia and Hezbollah, on the other. This does not bode well for anyone. There will be no winners in this show of power.

The U.S. support for the YPG has created a serious crisis of trust. Add to this the inaction so far in regards to the Gülenist Terror Group (FETÖ) network in the U.S. Neither the Obama nor Trump administration has understood how serious these two threats are for Turkey. They may see the U.S. relationship with the YPG as "temporary, transactional and tactical," but it poses a strategic security threat to Turkey because all support given to this group empowers the PKK.

Turkey has been part of the international coalition fighting Daesh and has eliminated thousands of Daesh terrorists. The problem is not the fight against Daesh, which Ankara fully supports, but the fact that the U.S. has chosen to work with the wrong players on the ground. This cannot continue. We hope that the recent meetings with Turkish officials have helped U.S. officials understand the seriousness of the matter.

The same goes for FETÖ, where again, neither the Obama nor Trump administration has taken any steps at all to address Ankara's legitimate security concerns. FETÖ members roam freely in the U.S., including its leader, when there are court indictments and arrest warrants for them. The U.S. cannot justify this in the name of judicial independence. Ankara has never asked the U.S. government to do anything unlawful. It has only requested extradition, detention and/or arrest based on agreements between the two countries. If for nothing else, U.S. officials need to understand that FETÖ operatives are doing everything possible to undermine Turkish-U.S. relations. They have to bring an end to this.

To overcome this crisis of trust, the U.S. administration has to take steps regarding both the YPG and FETÖ. Otherwise, a decades-long relationship and alliance will be damaged irreparably. The recent meetings should produce concrete results on the ground.

The U.S. should start the process of disengaging from the YPG and move it out of Manbij and to east of Euphrates. Turkey and the U.S. forces working with local people can insure the Manbij area. There is a model that has worked for this purpose in the area between Jarablus and al-Ray, cleared from Daesh by Turkey's Operation Euphrates Shield, which has no Daesh, no YPG and no regime forces. And it poses no threat to anyone. The same can easily happen in Manbij. This is what Turkey seeks to achieve in Afrin with Operation Olive Branch.

Turkey has no problem with the Kurds of Syria as long as they are not part of the PKK network. In fact, there are hundreds of thousands of Kurds who reject the PKK's old-fashioned Marxist-Leninist ideology and terrorist tactics. The legitimate representatives of Syrian Kurds should be given priority for building an inclusive and democratic Syria.

There is much to gain from a constructive partnership on numerous bilateral and regional issues, but this can happen only when the U.S. administration realizes the seriousness of the PKK, YPG and FETÖ issues for Turkey's national security.