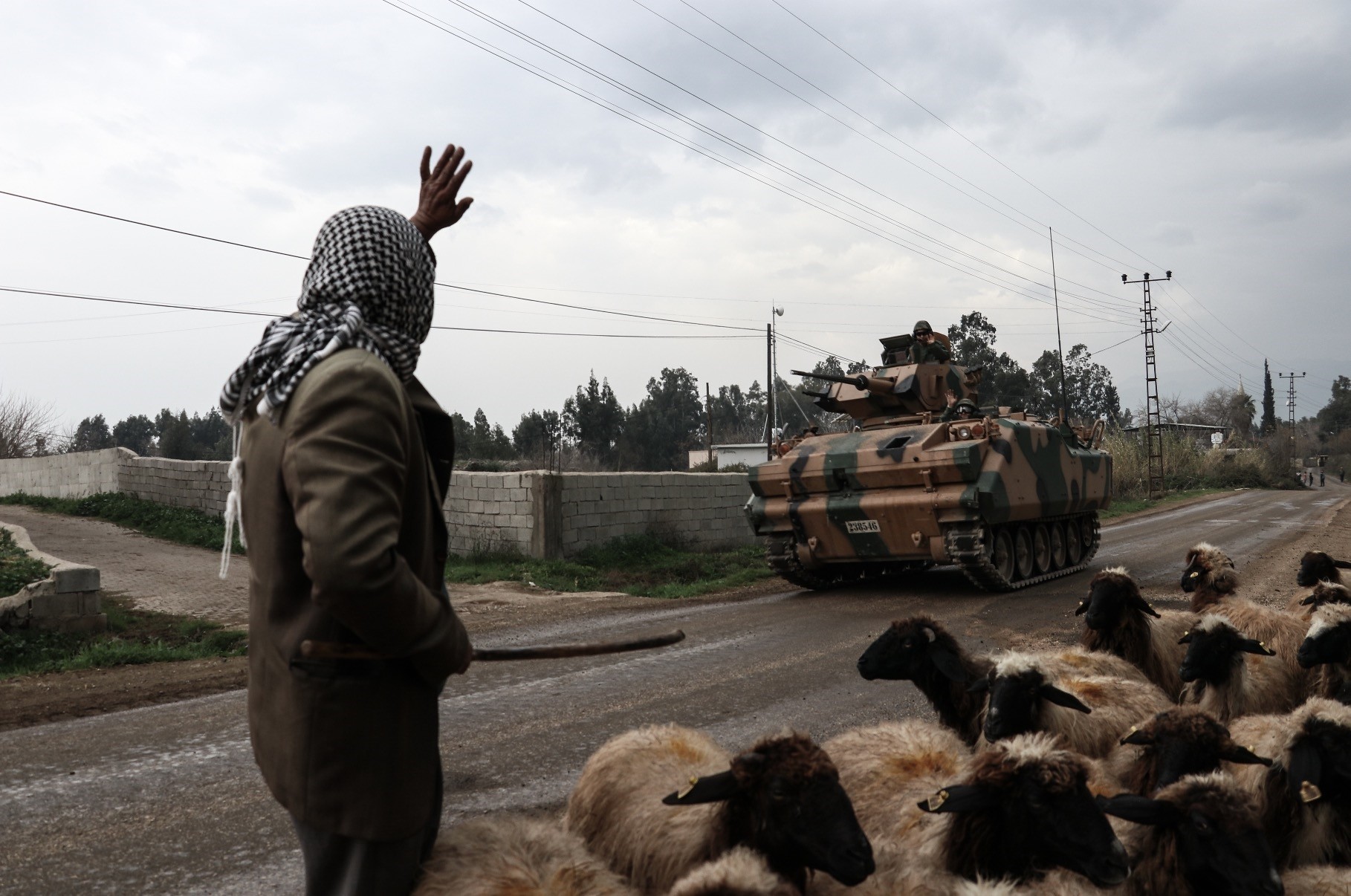 A Syrian shepherd waves to a Turkish soldier as he passes by after Afrin was liberated from YPG terrorists as part of Operation Olive Branch, March 21, Syria.
by İbrahim Kalın Mar 24, 2018 12:00 am

Operation Olive Branch, which was launched on Jan. 20 by the Turkish military and Free Syrian Army (FSA), entered a critical phase on March 18 when the Afrin city center was captured. The Afrin region was cleared from the PKK terrorist organization's Syrian affiliate Democratic Union Party's (PYD) People's Protection Units (YPG) militia. This should be celebrated as a major win in the fight against terrorism and welcomed as a positive step to protect Syria's territorial integrity. Instead, some lament Turkey's victory and the YPG's defeat. What is exposed here is the inherent fallacy of a common mindset in certain Western circles.

But those who are surprised and disappointed with the pace and precision of Operation Olive Branch in Afrin are now trying to present this victory as a blow to the fight against Daesh and are urging Western countries not to betray the Kurds. Which Kurds are they really talking about here? Kurds who do not accept the PKK's outdated Marxist-Leninist ideology, oppression, executions, kidnapping and forced recruitment of Kurdish children, or PKK terrorists? For them, anyone who is not a PKK member or sympathizer is not a Kurd. What they mean by supporting the Kurds is open support for the PKK and its affiliates in Syria, Iraq and Iran.

What they do not want to understand or admit is that there are millions of Kurds who do not accept the PKK as anything other than a tool and pawn in proxy wars and power plays of the modern world. The so-called Western experts treat non-PKK Kurds as practically nonexistent. They also ignore that there are Syrian Kurds in the FSA ranks that liberated Afrin.

This is like saying that any white American who is not a member or supporter of the KKK is not white. It is not any different from the claim that any German who is not a neo-Nazi is not actually German, but something else.

This fallacious logic cannot be the basis of a rational approach to understand Kurds, Turkey, Syria and the larger Middle East. Former President Barack Obama's decision to support the YPG was a fatal mistake and no amount of strategic maneuvering or journalistic punditry will make it right. Supporting the YPG in the name of fighting Daesh in Syria is a great disservice and injustice to Kurds. It also puts Turkey and the United States, two NATO allies, at loggerheads over a key regional issue. Instead of questioning Ankara for giving an effective fight against Daesh and the YPG, so-called experts should reject the logic of partnering with a terrorist organization against a NATO ally.

The Afrin operation was swift and successful, civilian casualties were avoided and towns and cities were not destroyed. There is no humanitarian crisis and civilians are returning to their homes. PKK supporters masquerading as experts should take the trouble to look at the pictures before and after the Mosul and Raqqa operations and compare and contrast them with those of Afrin. They should be thanking Turkey and hail Operation Euphrates Shield and Operation Olive Branch as models in the fight against terrorism. Their lamentations of Turkey's victory is a lamentation for the YPG's, and by extension the PKK's, loss.

Turkey has never been involved in the business of demographic change. Its record in the area between Jarablus and al-Bab in Syria is very clear. So the claim that Afrin's demographic structure will be changed is an outright YPG lie. As a matter of fact, it was the PYD and YPG that forced demographic change in Tel Abyad, Kobani and other Arab towns in Syria, which Amnesty International reported as a possible war crime.

The Afrin operation also proved wrong the claim that the FSA cannot give a good fight, which has been circulated as a tactical lie to justify the PKK in Syria. In both Jarablus and Afrin as well as other places before they were left in the cold by the U.S. several years ago, the FSA has shown its capability to fight with discipline and success against Daesh and YPG terrorists when they are properly supported. The claim that the YPG is the only effective ground force against Daesh and should therefore be supported by all means is like putting the cart before the horse. Any force that receives the kind of support given to the YPG has would be the most effective fighting force against Daesh and other security threats.

The Afrin operation is a victory for peace and defeat for terrorism. It is a major blow to terrorists in northern Syria and should be supported by everyone who takes a clear stance against terrorism in all of its forms.

Presidential spokesperson for the Republic of Turkey
Last Update: Mar 24, 2018 1:21 am
RELATED TOPICS