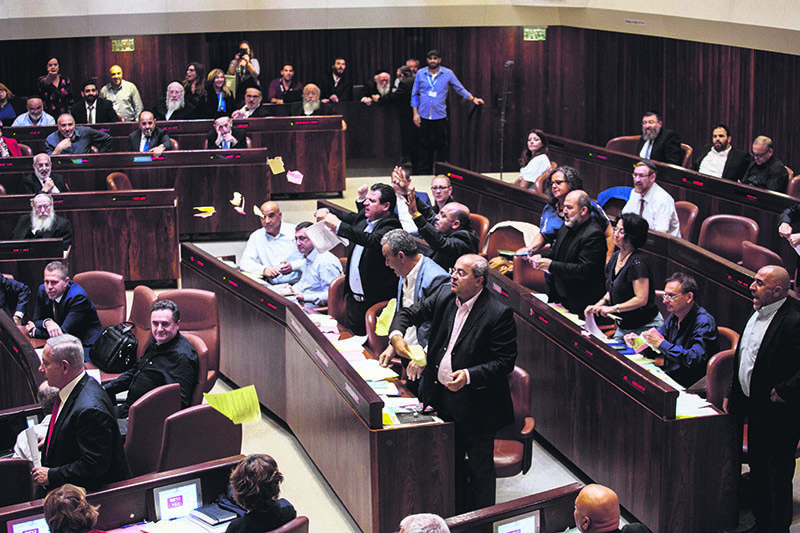 Arab lawmakers stand up in protest during a Knesset session against the parliamentu2019s approving a controversial bill to define Israel as the nation-state of the Jewish people, July 18, 2018. (AP Photo)
by İbrahim Kalın Jul 21, 2018 12:00 am

With the new bill, the Zionist plan to eradicate the Palestinian people and land from the face of the earth enters a new phase

What some Western media outlets called "Israel's controversial nation-state bill" is in fact racist legislation and advocates an official apartheid system. It is the last nail in the coffin of the two-state solution. It must be rejected by everyone who believes in justice and peace.

The bill stipulates: "Israel is the historic homeland of the Jewish people, and they have an exclusive right to national self-determination in it." This sends a terrifying message to the Palestinian minority of Israel and to millions of displaced and occupied Palestinians that they have no official place in the Jewish state. The Palestinian citizens of Israel are already treated as second-class citizens. The bill will make their status even worse.

It designates Jerusalem as the "complete and united... capital of Israel." This is another slap in the face of the international community and countless U.N. resolutions that have rejected the illegal occupation of Jerusalem and Palestinian lands. With the full backing of the Trump administration, the Netanyahu government shamelessly seeks to legalize occupation and antagonize the entire Muslim world. Let's remember that on Dec. 21, 2017, the U.N. General assembly resoundingly rejected by 128 to 9 votes the U.S. decision to accept Jerusalem as the capital of Israel. With this new legislation, Israel once again showed that it sees itself above international law.

There are other troubling clauses in the new bill. It refers to the importance of "development of Jewish settlement as a national value." This is nothing but a declaration of the continuation of Israel's "settlement," i.e., occupation policy. It shows once again that the settlement movement has taken over the State of Israel, undermining any notion of democracy, equality and civil rights. Seeking to expand and legalize occupation as a national policy in the 21st century shows the degree to which the current international order is based on might rather than right. This approach entails that any political settlement in the occupied Palestinian lands will be on Israel's terms only. This is a recipe for disaster and a total failure because no peace can be sustainable without justice.

With the new bill, the Zionist plan to eradicate the Palestinian people and land from the face of the earth enters a new phase. After it was passed, Israeli Prime Minister Netanyahu told the Knesset, "This is a defining moment in the annals of Zionism and the history of the state of Israel." This is a confession that the Zionist project, rejected by many pro-peace and conscientious Jews, will continue at the expense of the lives, lands and freedom of the Palestinian people.

The world has to reject this bill because it amounts to erasing the Palestinian people from their homeland physically and legally. It sets a terrible precedent whereby an occupying force can claim victory and legality. It undermines any sense of international law and order. It turns the U.N. once again into a feeble and irrelevant body.

Turkey, the Arab League, Qatar and the European Union have rejected the bill as discriminatory and noted its fatal consequences for the two-state solution. The bill was accepted with 62 "yes" versus 55 "no" votes in the Israeli Knesset. Many Jewish organizations in Israel and the U.S. criticized it as unnecessary and counter-productive. These voices are important and should be supported. All countries, communities and advocacy groups who believe in a legally, morally and historically fair settlement of the Israeli-Palestinian conflict should join forces against defenders of racism and apartheid.

There is no modern drama as painful and unfair as the agony and pain the Palestinians have been subjected to as an occupied people. Their suffering has been silenced, marginalized and even terrorized by extremist settlers/occupiers and right-wing Israeli and American politicians. Oppression and tension may work to the benefit of populist politics for short-term gains, but it will never bring peace, order, security and prosperity to the Muslim, Christian and Jewish peoples of the Middle East. American politicians are making a huge mistake by giving unconditional support to Israel's unlawful and racist policies. Those who keep silent in the face of the never-ending Israeli occupation and oppression are also guilty of condoning the policies of an apartheid state. Palestinians and Israelis deserve better than this.