The Idlib quagmire is yet another test for the international system 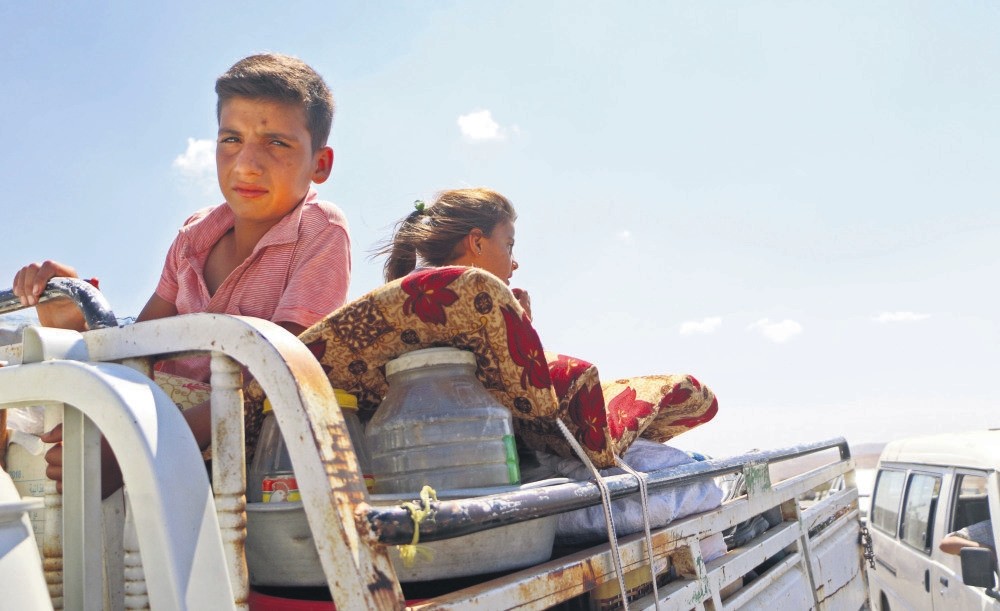 Syrians ride with their belongings in a pickup truck as they head to safer areas in Syria's Idlib province after fleeing regime attacks, Sept. 6.
by İbrahim Kalın Sep 08, 2018 12:00 am

It is high time for the international community to prove its sincerity in helping Syria open a new chapter; repulsing the looming threat of a possible bloodbath in Idlib is a first step

In its 7th year, the Syrian war continues to produce chaos, human drama and political turmoil. Without a robust and sustainable political solution, the ongoing political and military fighting will only exacerbate the current crises. Recent developments in and around Idlib are likely to make things worse, not better.

The Syrian war is not about Syria anymore. It is certainly not fought to help the Syrian people. It is the scene of a global proxy war between global and regional powers. Its brutality comes not just from the weapons used but from the insatiable urge to posses more power and influence. A solution based on reason, virtue and compassion would have been possible a long time ago if the stakeholders had a different approach.

The world has largely turned its back on the Syrian people. While paying lip service to the suffering of the Syrian people, the major players have done very little or nothing to stop the war. They watched the Syrian people caught between the twin monsters of the war: the ruthless Assad regime that has killed thousands of its own people and the terrorists of different brands, including Daesh, the PKK-affiliated Democratic Union Party (PYD) and People's Protection Units (YPG) groups also responsible for death and destruction in Syrian territories.

The two processes of Geneva and Astana have produced some results but neither has been able to stop the ongoing carnage. The Americans have used Daesh as a pretext to justify their presence in northeast Syria. With the Daesh threat largely eliminated, they are looking for ways to legitimate their engagement with the PKK in Syria in grave violation of the strategic partnership and relationship between Turkey and the U.S. Turkey's calls on the U.S. to stop this shady relationship have fallen on deaf ears. The regime and its backers, i.e., Iran and Russia, have also used the Daesh monster to justify their policies of drawing a new map in the Levant. They all have destroyed or weakened the moderate Syrian opposition groups both militarily and politically.

Idlib has remained as the last stronghold of the Syrian opposition forces. Any attack on this province of 3.5 million people will lead to a major humanitarian catastrophe. It will trigger another wave of migration into Turkey and from there to Europe and elsewhere. It will bring nothing but death and destruction. It will undermine all political efforts under both the Geneva and Astana processes. It will be an immoral victory for the Assad regime. It will once again show that the only way to get what you want in Syria is to use indiscriminate and brutal force. This cannot be the way to resolve the Syrian conflict.

The world once again has done very little to prevent the current quagmire around Idlib. Statements of warning, anger, concern, etc. do not achieve anything. The threat of attack if the Assad regime uses chemical weapons is pointless for two reasons. First of all, the regime has used chemical weapons in the past and nothing has been done to fully destroy its capacity. A few attacks mostly for popular pictures do not amount to anything. Secondly, the condition of the use of chemical weapons is another way of saying that the regime can continue its carnage with conventional weapons. This is the shameless irony of the Syrian war: the regime has killed far more people with conventional weapons and used chemical weapons. And it is still standing with more threats of both.Europe's primary concern is not to stop the war – we have not seen any major proposals or efforts so far – but to make sure that European countries do not face another wave of migration as they did back in 2015 and 2016. They stand with Turkey and this solidarity is important to deepen. But no single country, including Turkey, can shoulder the burden of ending the military fight, finding a political solution and taking care of the refuges. Europeans must step up to the plate.

Idlib is a de-escalation zone under the Astana agreement. As the three guarantor countries, Turkey, Russia and Iran have established military posts in the province. Turkey has 12 of them. The presence of Turkish soldiers there is probably the only guarantee to prevent any major assault because the Russian jet fighters and the regime ground forces cannot afford attacks while Turkish soldiers are there; we know that they do not care about civilians and legitimate, moderate opposition forces. Any attack on Idlib in the name of eliminating terrorist groups would undermine the Astana process.

Turkey has done its utmost and will continue its tireless efforts to prevent another humanitarian catastrophe in Syria. International support must go beyond statements of concern or "anger," as U.S. President Donald Trump tweeted. It must be translated into concrete action for both a political solution and a plan for the refugees. Idlib is a ticking bomb. We can turn it off and start a new process in Syria if the international community gets serious about the Syrian war and shows that they do care about the Syrian people.