Turkey's enemies at work in the Suruç blast 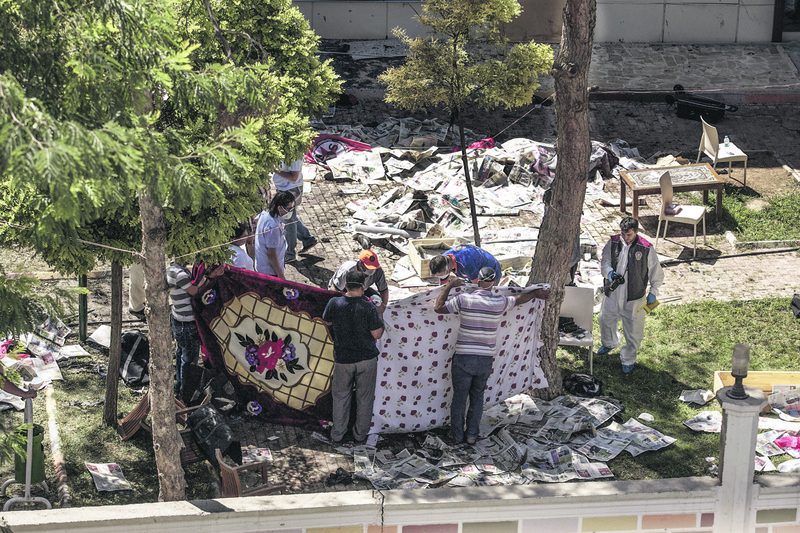 The scene after a terrorist attack carried out by a suicide bomber in the Suruu00e7 district of u015eanlu0131urfa province in Turkey, not far from the Syrian border.
by İlnur Çevik Jul 21, 2015 12:00 am

Turkey recently stepped up pressure on ISIS, catching prospective recruits and trying to dash across the border to join the militants who drew fire from the radicals

The bomb attack in the southeastern city of Suruç in Şanlırfa province that targeted a meeting of the Federation of Socialist Youth Associations (SGDF) attended by the young Kurds of Turkey is clearly a blatant act of provocation that should unite all of us more in these hard times when our country is surrounded by fire, conflicts and tyranny.

It was known in advance that a group of Kurdish activists with sympathies for the PKK who came to Suruç from other parts of Turkey would hold a meeting there and then move on to Kobani in northern Syria to display their solidarity with the Kurds of the region who are struggling against the militants of the Islamic State of Iraq and al-Sham (ISIS).

So it seems they were an easy target for anyone with ulterior motives and, unfortunately, that is just what happened. An alleged suicide bomber dashed into the young people killing at least 30 people and wounding about 100.

There are several suspects: ISIS madmen, agents of Syrian President Bashar Assad's regime and even those inside Turkey who want to create havoc; it could even be a fringe faction of the PKK.

ISIS has been threatening Turkey for quite some time, which prompted us recently to warn the authorities that they should be alert for activities of ISIS militants in Turkey. Turkey has always fought ISIS through various means, but in recent weeks Turkey has stepped up its pressure on ISIS, catching prospective ISIS recruits trying to dash across the border to join the militants. The fact that Turkey is actively cooperating with the United States against ISIS is also drawing fire from the radicals.

ISIS is bold. It would claim responsibility for such a terrorist act and stick to it. So if this is the work of ISIS, we will soon hear them boasting about it.

On the other hand, agents of the Assad regime are always at work and would like to sabotage the peace and tranquility in Turkey.

Then of course there are all kinds of terrorist groups that want to stir up trouble in Turkey and kill several birds with one stone. Some PKK factions seem more than interested in promoting violence in Turkey.

What is sad, however, is the statements by some leading members of the pro-Kurdish Peoples' Democratic Party (HDP) who have accused the Turkish government and ISIS of cooperating in this incident. Such suggestions only create anger and feelings of alienation among the Turkish masses and make life more difficult for Kurds in Turkey. They should be working for the unity of the citizens of this country instead of making wild accusations.

Instead of instigating discord they should be helping the government and authorities find the culprits.
Last Update: Jul 21, 2015 9:23 am
RELATED TOPICS