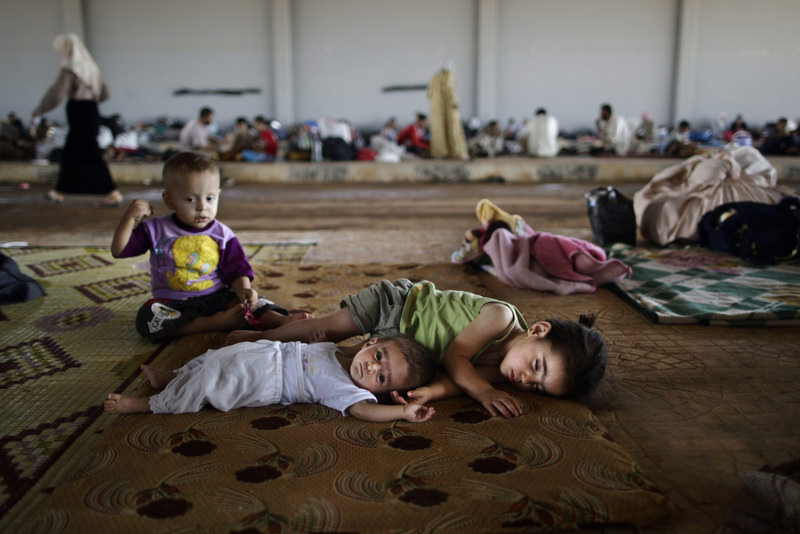 Syrian children who fled their homes with their families due to the Syrian civil war lie on the ground in hopes of entering one of the refugee camps in Turkey.
by İlnur Çevik Sep 04, 2015 12:00 am

With growing numbers of Syrians fleeing their country devastated by civil war, refugees are now transiting Turkey in a quest to reach rich European countries, especially Germany. Their path to north European countries is dotted with obstacles, enmities, chaos, deprivation and tragic scenes.

The 3-year-old Syrian boy lying dead washed up on a beach near the resort city of Bodrum in southwestern Turkey two days ago is unfortunately only a dot in the massive tragedies that are seen in the Aegean Sea as refugees try to slip out of Turkey and reach the Greek islands on their way to the Balkans and then to north Europe.

Greek authorities on the islands of Lesbos and Kos just off the Turkish coast are overwhelmed as 15,000 refugees have practically occupied the islands and more are coming, using makeshift dinghies that usually sink resulting in tragedies. According to official United Nations data 2,500 refugees trying to reach Europe have drowned in the Mediterranean Sea this year.Europe has closed its eyes to the plight of the migrants from Syria for nearly three years. Syrian refugees have found a safe haven in Turkey thanks to the massive goodwill shown to them by the government and Turkish people. Turkey has set up excellent tent camps for the Syrians near the Syrian border and has allowed more of them in to stay in cities all across the country. Today Turkey hosts about 2 million Syrians, which is a record for any country in the world that faces a similar situation. Turkey has spent $6,5 billion in taxpayers' money for these people who are living in relatively decent conditions. Many international organizations and governments have acknowledged the incredible sacrifices Turkey has made for these people.

Turkey sees no end to the crisis in Syria and is thus accepted the fact that it has to host Syrians for a very long time to come. The extended stay of the Syrians is of course creating social as well as security problems but Turks are doing their best to cope with these.

So as the Turkish people and their government have put up a magnificent show and have set an example that is the envy of all other countries, what have the Western powers done to help the Syrian refugees?

The answer is a sad nothing in view of the massive dimensions of the problem. The European Union countries have accepted about 250,000 Syrians until now and have merely spent about $300 million on them.The refugees clearly see that Turkey's ability to handle more refugees has come to a saturation point thus they are now forcing their way into Europe. Hence they are facing massive problems along the way. They are drowning in the Aegean, they face hell on the Greek islands and those who manage to make their way to the Balkans face racial enmity as usual at the hands of Serbian hordes. Once they manage to get to Hungary they face a blockage that has been in force for the past few months. Now the Hungarian authorities have been forced to bow to the refugees and their safe passage to Germany is being secured.

The general view is however, that as usual, European leaders are too slow and too late in reacting to an emergency situation that has gotten out of hand. Many newspapers in Europe are calling for their leaders to wake up from the summer vacation mood and face the realities.

Turkish leaders, who have been criticized so much in the past for their policies on human rights and civil freedoms, have clearly performed with excellent scores in the Syrian refugee crisis. They could well set a good example for the awakening of their counterparts in European Union countries.
Last Update: Sep 04, 2015 2:07 am
RELATED TOPICS