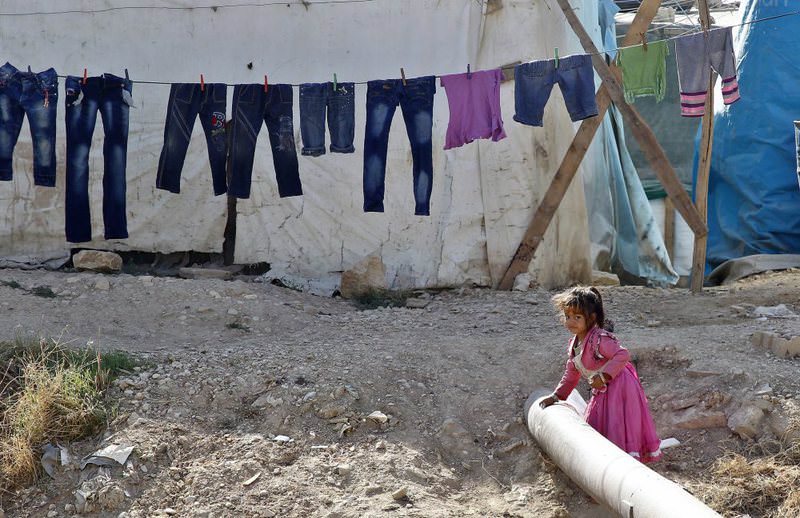 It seems now with Russia's military support for the Assad regime, Syrians living under the poor conditions caused by the war will continue to live that way.
by İlnur Çevik
Oct 02, 2015 12:00 am

When news came that Russia had bombed various targets in Syria it came as no surprise after the news that Russia had brought fighter planes and attack helicopters to their base on the Mediterranean coast of that country.The Russians have always said they back Syrian leader Bashar Assad, and recently Russian President Vladimir Putin declared that Moscow would help Assad survive.

The attack comes just after news came out that Washington and Moscow had agreed at the United Nations to find a solution to the Syrian crisis with a transition period, after which the Assad regime should be pacified. However, it is also clear that while the U.S. says Assad should eventually go, Russia wants him to stay in some form.

So there seems to be a tacit agreement between Moscow and Washington to agree to disagree. This is clearly manifested as Russia attacked targets in Syria and asked the U.S. to cease its aerial operation in Syrian airspace as Russian aircraft flew missions. U.S. planes disregarded this and went on to attack Islamic State of Iraq and al-Sham (ISIS) positions in northern Syria. There is also disagreement on the targets involved. Russia says it attacked ISIS, but coalition forces led by the U.S. say the targets attacked were not ISIS and in fact they were Syrian civilians who live in areas controlled by the Free Syrian Army (FSA), which opposes Assad.

So Russia is now knee deep in Syria, which is a new dangerous twist in events. Its presence means a new and fatal complication in the Syrian equation that is bad news for Syrians as well as regional countries.

It shows Russia with the pretext of fighting terrorism, which may set a precedent in Syria and thus would use the same tactics in other places. It shows how events can turn from bad to worse when the U.S. is unenthusiastic in properly intervening to end the Syrian bloodbath as it once upon a time did in Bosnia. Their lack of desire to be involved in Syria and trying to handle the issue with half solutions like bombing ISIS targets has invited the Russian intervention.

This means the establishment of secure areas where people fleeing Assad's massacres and ISIS atrocities that Ankara promotes cannot be achieved.

Some European countries like France had started warming to the idea of a safe haven inside Syria for refugees of the Syrian war. Ankara had been selling the ideas to the Europeans saying that if they want to stop the exodus of Syrian refugees to Europe then they have to keep them at home in safe places. However, the presence of Russia prepared to bomb even civilians who oppose Assad means safe areas will never be safe. That seems to justify the opposition of German Chancellor Angela Merkel who recalled a secure zone inside Syria could turn in to a Srebrenica where Serbs butchered tens of thousands of Bosnians.

Turkey is justified in demanding an end to the Assad regime, which has killed hundreds of thousands of its own people in cold blood. But it is also time for a realistic appraisal of the current situation and fine tune Ankara's policies on Syria.
Last Update: Oct 02, 2015 2:15 am