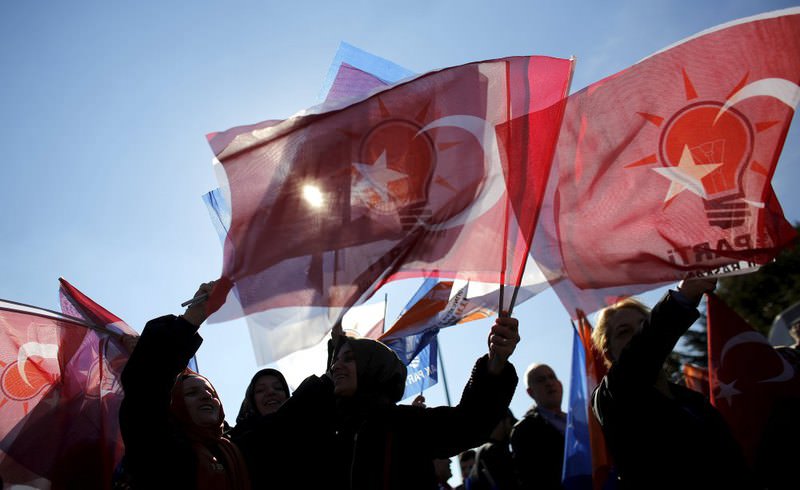 AK Party supporters wave flags as they wait for the arrival of PM Ahmet Davutou011flu in Istanbul, following their election victory.
by İlnur Çevik
Nov 06, 2015 12:00 am

Giving the AK Party a victory in the Nov. 1 elections, the public helped their country remain a ray of hope in the region suffering from dictatorships and civil wars

The landslide victory by the Justice and Development Party (AK Party) in Sunday's elections has strengthened Turkey's international standing, a development welcomed by its friends but one which has created a feeling of disappointment among its adversaries, topped by Basher Assad and those who support the PKK.

Turkey will soon host the G20 summit in the Mediterranean resort city of Antalya and will now have the ability to become a viable host with a president whose strength has once again been acknowledged and a prime minister who has won a massive mandate from the people in the Nov. 1 polls. This on its own is a great plus for Turkey as only a few weeks ago people had started to write off President Recep Tayyip Erdoğan and Prime Minister Ahmet Davutoğlu, saying that this was the beginning of the end for the AK Party.

However, miracles do happen and the Turkish nation proved everyone wrong, changing the tide and opting for Erdoğan and Davutoğlu.

Now when Erdoğan and Davutoğlu address world leaders they will be talking from a position of strength and not as politicians whose leadership is under question due to the June 7 elections.

So the world has seen that once again Turkey will remain a viable and strong ally for its friends and a formidable adversary for its enemies.

The Turkish people not only opted to allow stability in Turkey to continue by giving the AK Party a resounding victory but they also helped their country remain a ray of hope in a region suffering a massive inferno.

There are many oppressed and underprivileged people around the world who see Turkey as a source of hope and the Turkish voters helped to enhance this image. The world's Muslims, who have been victims of internal struggles and massacres, see Turkey as a remedy to put an end to the destruction and death.

Iran now has to decide whether it wants to remain a friend or gradually become an adversary of Turkey's. The Tehran administration has been giving out mixed signals promoting Shiite expansionism around us and has also been hurting Turkey's interests in Iraq and especially in Syria. Now with the continuation of a strong administration in Ankara they will be thinking twice before harming Turkish interests.

The Russians will also do the same as, until now, they found it much easier to impose their will in Syria in the temporary absence of a viable administration in Ankara. Now they too will think twice about offending or irking Ankara.

Above all that, Assad, who has been displaying deep enmity toward Turkey, must be extremely alarmed with Erdoğan and Davutoğlu gaining strength in Ankara.

The U.S. and European Union both must feel some relief that their ally has opted for stability, which means a boost for "peace at home, peace in the world."

Turkey will now be able to better handle the Syrian crisis, migrants and the deteriorating security situation in the region. But now the EU and even the U.S. need to start working on a scheme to appease Ankara.
Last Update: Nov 06, 2015 2:07 am