Russia playing with fire by flirting with the YPG 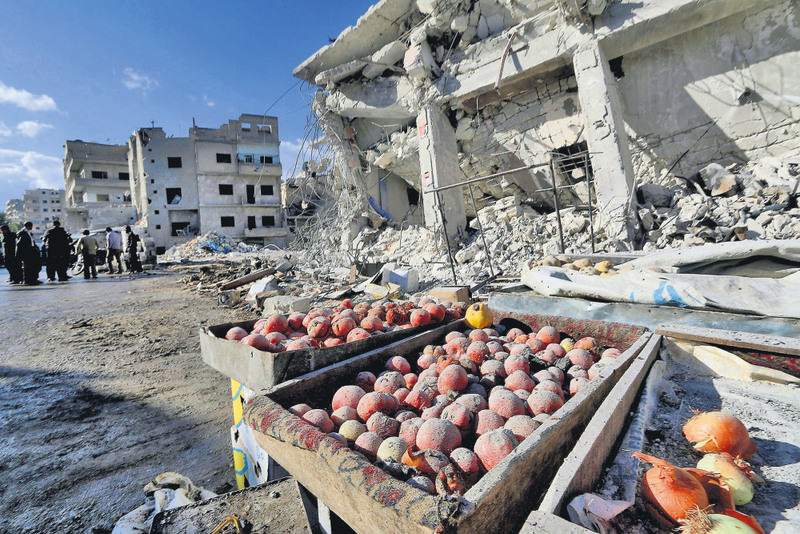 Products are covered in dust as people inspect a site claimed to be hit by airstrikes of the Russian air force on a busy marketplace in the town of Ariha, in Idlib province, Syria.
by İlnur Çevik Dec 02, 2015 12:00 am

As Russian President Vladimir Putin and his colleagues continue to fan deep enmity toward Turkey, they seem to be losing their ability to make cool-headed and realistic judgments, which quite simply is a serious threat to world peace.

It is no secret that Russian extravagance and its growing economic illness has started to take its toll on the Russian people as world energy prices continue to float at all-time lows. So Putin and his men have embarked on a dangerous adventure in foreign lands first with the Caucasus with special emphasis on Georgia, then on Eastern Europe with special emphasis on Ukraine and Crimea and now in the Middle East with the all-out Russian intervention in Syria to divert the attention of the Russian people from the economic mess they have created.

Yet, each Russian bomb that is being used in Syria and the current costly military operation is further deepening the Russian economic crisis.

At first Russia tried to mislead world public opinion claiming that its adventure in Syria was limited to ending the presence of DAESH. But then Moscow had to admit that it was using its air force to bolster the Assad regime and thus keep it in power, at least in Damascus.

So, jet fighters and helicopters were brought to the Russian base in Syria, which were used against everyone opposing Assad. They have been hitting Syrian Turkmens and Arabs under the pretext that they are all members of DAESH, which is a load of nonsense.

With the craze of trying to hurt Turkey, Putin has ordered his people to support the militant Kurds of Syria.

What the Russians are doing in northern Syria is not just an act of fighting against those opposing the Assad regime but they are actually helping the Kurds of Syria to become more intransigent, seriously hurting Turkey's vital interests in the region.

The Syrian-Kurdish Democratic Union Party (PYD) has become bolder in defying Turkey as its armed wing, the People's Protection Units (YPG), is getting Russian support. The Americans bolstered the PYD, as they used it as a fighting force against DAESH, but now they have lost the PYD to the Russians.

Turkey had issued a stern warning that while it opposed anyone bolstering the strength of the PYD in northern Syria, which in fact is a wing of Turkey's PKK terrorist organization, it will not take active steps to halt the Syrian Kurds in playing their game in a limited area, but it will not tolerate them trying to push into the west of the Euphrates River and onto the lands that are housed by Turkmens that lead to the Mediterranean coast.

The Americans understood Turkey's concerns and have curbed their support to the YPG. However, with the downing of the Russian plane that violated Turkish airspace, Russia has started playing the YPG card to "punish" Ankara. They are helping the YPG by giving them arms and encouraging them to push west of the Euphrates.

This will only invite active Turkish retaliation. Turkey has shown it will not hesitate to protect its vital interests, like in the downing of the Russian plane. It is time our allies, led by the United States, started pulling some strings in Moscow to bring Putin to his senses.
Last Update: Dec 02, 2015 2:06 am
RELATED TOPICS