Turks still have suspicions about the EU... 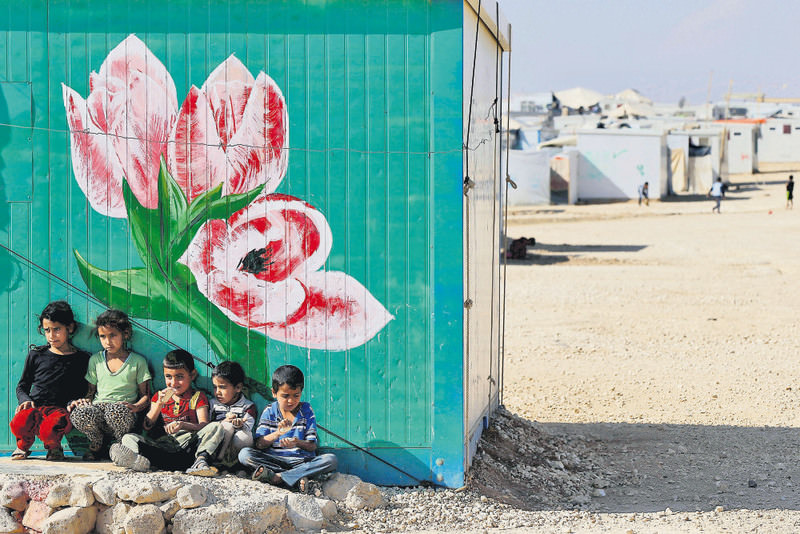 A group of Syrian refugees posing in front of their family's painted caravan at Al Zaatari refugee camp, in Mafraq city of Jordan near the border with Syria
by İlnur Çevik Dec 15, 2015 12:00 am

Turkey's hosting more than 2 million Syrian refugees, who fled the civil war in their homeland, as well as other Syrians reaching European borders, reactivates the relations between Turkey and the EU

Turkey and the EU are opening a new chapter in their relations which have been dotted with ups and downs.

Turkey, despite all the discouragement from EU member countries over the past few years, still strives for the ultimate goal of full membership while the EU seems to have accepted the fact that at times they need Turkey badly.

This is a time that the EU needs Turkey badly, with Ankara providing the bloc with a way out of the crisis as Syrian refugees migrate to Europe in huge numbers.

Turkey has agreed to facilitate the growing flood of refugees as it already hosts more than 2 million Syrians who have fled their country, spending more than $7.5 billion in the past three years. So the EU has in return agreed to revitalize Turkey's full membership request.

So as part of this process, the EU has opened the 17th chapter in the full membership negotiations dealing with economic and fiscal policies. Experts have always said the opening of such a chapter is vital as it opens the way for the integration of the Turkish economy into the EU and is thus a serious step toward full membership.

The EU is also expected to allow Turks to travel to Europe without a visa by October 2016, which is a welcome development for many Turks.

The fact that the talks on Cyprus have entered a positive phase, where a solution seems to be a strong option, adds to the positive environment that eases the way for Turkey to enhance its ties with the EU.

The EU will provide 3 billion euros to Turkey to help the Syrian migrants over a two-year period and Ankara will spend this money to enhance the living conditions for the Syrians and help them to educate their children.

The EU of course will closely monitor how this money is spent. However, the closer scrutiny will be in the field of reforms that Turkey has promised the EU, to turn Turkey into a more democratic country where the rule of law and freedoms are respected. The EU will issue two progress reports about Turkey and these will be vital.

Prime Minister Ahmet Davutoğlu and his colleagues have done their homework well and have announced a reform package and have set the deadlines for the reforms and improvements they will undertake in the next three months, six months and year.

However, that is not all. Turkey is not the only side that will come under scrutiny. The Turkish people have serious questions about the sincerity of the EU in opening their doors to Turkey and judging from the past performances of the EU member states no one can really blame them.

The EU has not kept its promises to the Turkish and Turkish Cypriot people. They too will be under the watchful eyes of the Turkish public over the next year.
RELATED TOPICS