PYD, misled by the US, took Ankara too lightly 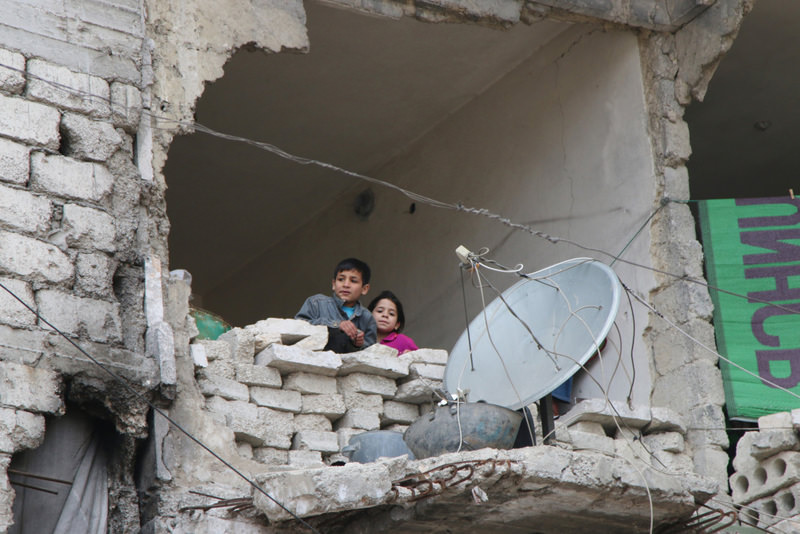 Children looking from a partially destroyed home in Aleppo, Syria
by İlnur Çevik Feb 15, 2016 12:00 am

Turkey was even too late to shell the YPG, armed by the U.S. against DAESH militants but fights the moderate groups in Syria only, which has lately added Turkey to its fight list

For days Turkey has been giving out signals that it will not stand idle as the Syrian Kurdish militants linked to the PKK try to carve out chunks of northern Syria to exploit the current confusion and mess created in the region by Russia and Syrian leader Bashar Assad's regime.The American inability to see the storm on the horizon and allowing and even encouraging Syrian Kurdish militants to carry on with their intransigence in the border areas across Turkey has forced Ankara to take matters into its own hands.

Turkey has been telling the Americans and everyone concerned that it will not allow the Syrian Kurdish militants of the People's Protection Units (YPG) to run amok in the region and harm Turkish vital interests. Turkey has said Kurds should not try to cross the west of the Euphrates and enter the areas where Turkey has agreed with the United States to create a safe zone where refugees being driven out of their homes by Russian air attacks and Iranian land assaults can theoretically be provided with a safe haven. But the YPG and its parent organization the Democratic Union Party (PYD) have turned a deaf ear to Turkish warnings and were encouraged and emboldened by U.S. encouragement. It seems as if the U.S. feels that if it does not appease the YPG, Kurdish militants with links to the PKK terrorist organization will fall into the laps of the Russians.

YPG militants tried to forge their way to the west of the Euphrates with a backdoor approach entering the region from the west and not the east. Ankara warned, no one listened. The YPG, which has been armed by the Americans to fight DAESH, captured the strategic air base of Menagh near the town of Azaz just across the Turkish border.

We want to underline the fact that the YPG did not grab the air base from DAESH forces but from the Syrian opposition forces that the Americans claim they support. So the famous argument that the YPG is combatting DAESH and thus deserved American backing is rubbish.

Turkey has started shelling YPG positions north of Aleppo and around Azaz on Saturday and more shelling has been reported early Sunday. American Vice President Joe Biden has called on Prime Minister Ahmet Davutoğlu to discuss the latest situation and has been told Turkey warned Washington over and over again and all the answers it received were repeated statements by the U.S. State Department spokesmen that Washington does not regard the YPG and PYD as a terrorist organization and will continue to support them. It is a typical American misreading of the situation that has created such a mess in Afghanistan, Iraq and now in Syria.

Assad's tyranny, Russia's intransigence, Iran's opportunism and America's indecisiveness and reluctance to be involved this crisis has created the current mess in Syria. Turkey has become the innocent victim, absorbing 2.7 million refugees from Syria and until now spending $9 billion for them over the past four years.

Those running Turkey have come under fire for misreading the Syrian picture at home. Some even say we are subjected to the current PKK violence because of our mistaken policies in Syria. It seems they miss the forest while concentrating on the trees. Doesn't the thief have any blame for the crime? Can't they see that while Turkey is trying to put out the fire, those who created the mess in Syria are only pouring more fuel onto the fire? Can't they see that by creating chaos in southeastern Turkey and trying to force Ankara to deal with this situation the PKK is trying to help PYD consolidate its position in northern Syria?
Last Update: Feb 15, 2016 1:24 am
RELATED TOPICS