The forgotten women of Syrian war 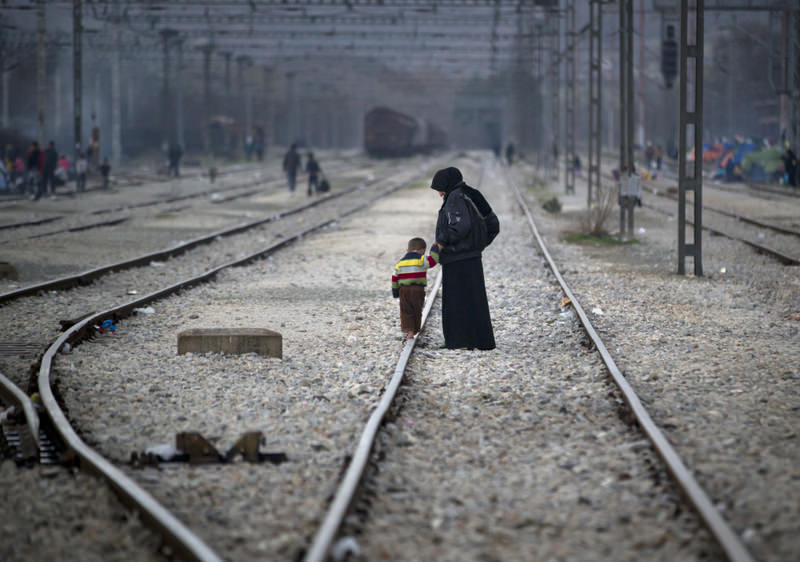 A Syrian woman holding the hand of a toddler walking on a railway track at the northern Greek border station of Idomeni.
by İlnur Çevik Mar 09, 2016 12:00 am

The women of Syria have always been second class citizens in a world of men. Thus they have nothing to do with the intricacies of the Syrian civil war and yet they are the ones who are forced to shoulder the massive burden of violence and destruction as they become migrants and seek salvation in Turkey, Jordan and Lebanon

International Women's Day is hardly a day to celebrate when there is a huge chunk of the world's female population facing gender problems and so many of them are victims of not only social violence but male-instigated wars, massacres, terrorism, hunger and famine while they try to shield their children from the destruction.

What is really sad is that everyone sees the plight of the Syrian women, who have to face the consequences of the civil war in their country, and hardly anyone does anything about it.

Last year the international conference on women at the United Nations talked about women's issues at length but there was hardly a mention of the Syrian women who brave the ills of the civil war while they also try to tend to their children. Let us hope this year's conference will be different.

The women of Syria have always been second class citizens in a world of men. Thus they have nothing to do with the intricacies of the Syrian civil war and yet they are the ones who are forced to shoulder the massive burden of violence and destruction as they become migrants and seek salvation in Turkey, Jordan and Lebanon. They go where their men drag them. Some are left on their own with their children and have to brave adverse conditions to survive.

Turkey has done its fair share for the refugees by taking in 3 million Syrians including women and children. They are hosted in tent cities and in dwellings all across the country. Turkey has spent $9 billion for the Syrians so far. That has made Turkey the third highest donation-making nation in the world. There are at least 500,000 children who need proper educational facilities and Turkey is involved in a massive operation to provide all these.

But despite all this no one can deny that the suffering of Syrian women continues not only in Turkey but also in other parts of the world as they try to seek refuge and shelter, especially in Europe.

The scenes of desperate Syrian women and children trying to brave the waters of the Aegean Sea are splashed on the front pages of newspapers around the world. The way the Syrian women and children are pushed around at the borders of Macedonia, Greece and Hungary have become a source of great shame for humanity. Yet, European leaders are still trying to get their acts together to help the Syrians out of this mess. They could not agree on setting brave proposals presented to them by Prime Minister Ahmet Davutoğlu on Monday night that are designed to ease the crisis of the Syrian migrants. Turkey has said it will help clear out the Aegean islands of migrants, it is ready to take back all the illegal migrants that have tried to slip into Europe, provided they too take in real Syrian migrants. Turkey has said it wants 6 billion euros of European Union grant money until 2018 to enhance the living conditions of the Syrians in Turkey, provide them with proper social facilities and schooling for their children. Other countries in a similar position with such a massive influx of migrants would be hopping mad, saying they do not want these people. Yet the Turks have shown they are people of deep humanitarian values and have embraced these people for the past three years. Turkey deserves to be treated like an EU member state in view of all this.

Yet we see European leaders still in disarray with "ifs" and "buts." Turkey has taken a courageous stance, the EU leaders should at last show some kind of responsibility to live up to the norms of being civilized Europeans for the sake of the Syrian women and children who are victims of the civil war and Syrian leader Bashar Assad's tyranny.
Last Update: Mar 09, 2016 1:20 am
RELATED TOPICS