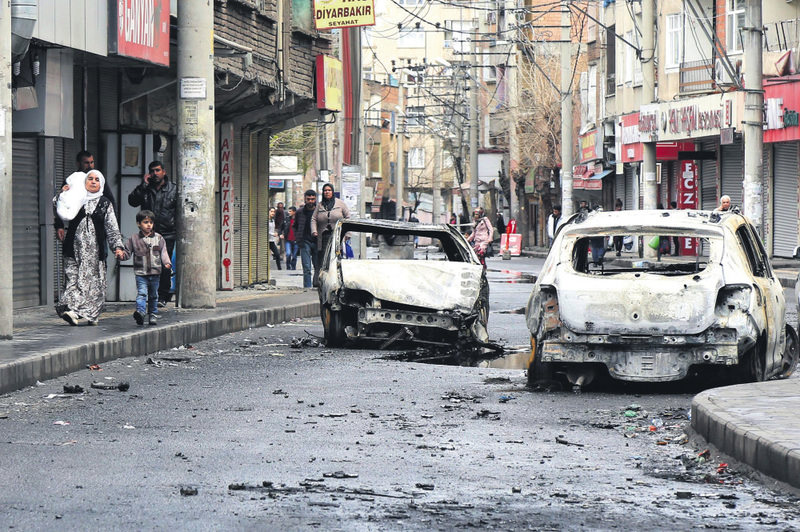 Residents of Bau011flar district in Diyarbaku0131r carrying their belongings as they leave after clashes between the Turkish security forces and PKK militants.
by İlnur Çevik Mar 18, 2016 12:00 am

HDP deputies, who support and promote the PKK's violence, are on the brink of being sent to court if the court fulfills its duty, as required by the Constitution, and lifts their parliamentary immunities

President Recep Tayyip Erdoğan has hinted that the parliamentary immunities of the Kurdish nationalist Peoples' Democratic Party (HDP) deputies that have been involved in PKK terrorism should be lifted and that those who have helped terrorists or who have been directly involved in PKK activities should be sent to court.

The move came in the aftermath of public uproar as a HDP deputy visited the condolence home opened for a PKK terrorist responsible for the suicide bombing inthe February Ankara attack that left 29 people dead. It also followed the mounting anger against the HDP as two of its deputies took part in the funeral of a local dead PKK terrorist leader and declared they would follow the course of the terrorist.

President Erdoğan told the meeting of the village headmen that the battle lines are very clear in Turkey between those who support terrorism and those who oppose it and struggle against it. He said everyone should choose their side and face the consequences.

He also urged Parliament to act swiftly against the deputies who support and promote violence by lifting their parliamentary immunities and thus send them to court.This triggered charges that the president was acting like a prosecutor and a judge and that the HDP deputies were being treated as criminals without a court verdict.

President Erdoğan and Prime Minister Ahmet Davutoğlu discussed the issue at length, conferred with their advisors and then decided that lifting the immunities of the HDP deputies would send the wrong message to the country and hurt international public opinion and that the immunities of all deputies in Parliament who face court charges should be lifted and thus whoever did any wrong should be brought to justice whether they belong to the ruling Justice and Development Party (AK Party), the Republican People's Party (CHP) or the Nationalist Movement Party (MHP) as well as the HDP.

Thus the wishes of Erdoğan will be realized while no one can accuse the AK Party and the government of acting with bias against the Kurdish nationalists who have unfortunately sided with the PKK and have praised the terrorist activities in the cities and towns of southeastern Turkey.Turkey has made good headway in southeastern Turkey among the masses. People see the Turkish security operations against the PKK as essential in the fight against secessionism and terrorism. That was why many Kurds voted for the AK Party in these regions in the Nov. 1 elections much to the disappointment of the HDP. The PKK had made life hell for them in the past three years and the people felt they should be liberated and saw the current security operations to get rid of the PKK oppression in the cities and towns like Cizre, Silopi, the Sur district of Diyarbakır, Nusaybin, Yüsekova, Şırnak and many other places as a way out. The fact that Turkish forces have treated the local population with affection and understanding as they combatted the PKK has won the Turkish state high marks from the local population.

So in light of all these positive developments no one wants to create any adverse conditions where the government could be accused of bias against the Kurds by sending HDP deputies to court by lifting their immunities.

So Erdoğan and the government decided that they would challenge all the parties in Parliament to have the immunities of all deputies who face court charges to be lifted and thus allow them to be prosecuted. The CHP had been asking for this for a long time, now they are obliged to cooperate.