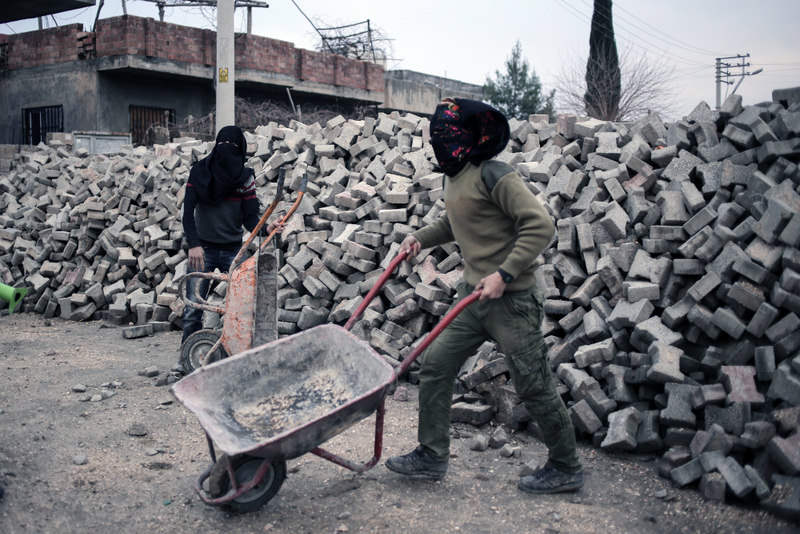 PKK militants setting up a barricade before attacking Turkish security forces in Nusaybin in southeast Turkey.
by İlnur Çevik Apr 06, 2016 12:00 am

Erdoğan, who is capable of distinguishing the difference between Kurds and Kurdish militants, does not allow the HDP-backed PKK's terror continue in the southeast while trying to legislate a new constitution that will allow the Kurdish citizens feel they are first class citizens like everyone else in the country

President Recep Tayyip Erdoğan is a leader who does not like "ifs" and "buts" and wants everyone to address an issue directly and that is exactly what he did on Monday at the Red Crescent convention in Ankara when he declared: "Terrorists have two options: They will either give themselves up and face justice or they will be hunted down and destroyed one by one. There is no third way."

This is a clear message that the days when the PKK terrorist organization and its political extension the Peoples' Democratic Party (HDP) could fool the Turkish authorities with the pretense of conducting dialogue and talks to solve the Kurdish issue and keep the peace and reconciliation process on track are long over. There will no longer be any form of dialogue either with the PKK or HDP.

Why would anyone stash arms for three years in the eastern and southeastern cities and towns if they really believed in the reconciliation process? Why would anyone move the PKK militants out of the mountains in Turkey and instead of withdrawing them to the Northern Iraqi mountains send them to the critical cities and towns to eventually stage an uprising? The answer is simple: They never had any intention to make real peace and create an environment of reconciliation in Turkey. They simply fooled us into thinking they were honest people while they were preparing for their secessionist uprising.

The PKK was never sincere. The HDP people claim they are helpless and that the PKK calls the shots and they simply obey. But even this kind of logic is wrong and misleading. The HDP does have a mind of its own and could have acted accordingly but they opted to become the tools of the PKK and thus have disqualified themselves as any meaningful counterpart if one day Turkey has the urge to talk the representatives of the Kurdish political movement.

It is clear that the PKK has been dealt blow after blow and is in a desperate state for survival. So the HDP and the Western friends of the PKK are trying to use every possible means through the European Union and the United States to revive the reconciliation process.

Erdoğan was very clear. Those days are over. The HDP and PKK had their chance and they blew it. Now they will face the consequences of fanning violence, death and hardships.

Turkey is bent on finishing off terrorists at all costs. There will be no lull or hesitation during this phase. Erdoğan was very clear about this. Once all this is over, the government will legislate a new constitution that will allow every citizen to feel they are a first class citizen of the Republic of Turkey and that includes our Kurdish citizens. The days are gone when the PKK through the HDP imposes its will on Turkey.
RELATED TOPICS