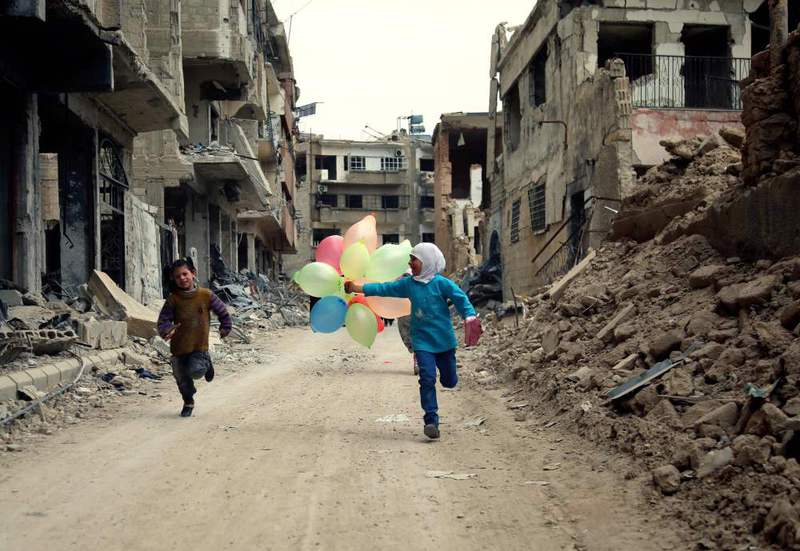 Syrian children with balloons running amid heavily damaged buildings in the neighbourhood of Jobar, on the eastern outskirts of the Syrian capital Damascus.
by İlnur Çevik Apr 15, 2016 12:00 am

The OIC's 13th summit, which was held under the presidency of Turkey, is a ray of hope for Muslim unity which is under the attack of the modern time Crusaders

The Islamic leaders of the world have assembled in Istanbul at their 13th summit of the Organization of Islamic Cooperation. The summit ends today and Turkey becomes the term president.

Turkey hosted the G20 summit in the Mediterranean resort city of Antalya and ended its term presidency with success and is now facing even a greater challenge as the term president of Muslim countries.

At first glance, G20 presidency may seem as the greatest challenge on earth as there you represent the world's 20 leading economies. Yet the challenge that Islam and Muslim countries face today are greater and deadlier than any challenge the G20 faces.

Islam is under assault on many fronts.

A secret hand has put into motion a modern time Crusade that is more sinister and fatal than the challenges posed to Islam throughout history. The Mongol invasion and the historical Crusades are nothing compared to the current plot against Islam.

The current plot involves a plan to hit Islam from within without having to resort to outside attacks. Sinister terrorist groups have been created like al-Qaida and DAESH that use the good name of Islam to instigate violence and barbaric acts. That in return creates anger and hatred in Western countries where masses turn against Islamic minorities hence hatred toward Islam deepens and creates Islamophobia.

But the plot does not end there. The modern time Crusaders also successfully use sectarianism to create divisions among Muslims by fanning Sunni-Shiite conflicts. Sunnis are also pitted against each other. Hence the inferno in Syria, Iraq, Yemen, Libya, Afghanistan and in many other Islamic lands.

Of course, we have to blame the modern time Crusaders for all these ills yet we also have to agree that while the thief is the culprit, we too have a duty to secure our homes against the thief properly and not give him the chance to rob us.

This is where Islamic unity and solidarity should step in. The leaders discussing the problems facing the Islamic world in Istanbul have to put their attention on the threat that Islam is facing as much as to their own conflicts and disputes.

We first have to turn to the roots of Islamic teaching, which created great civilizations that actually helped the West to end the nightmares of the medieval age. We have to teach our young generation the true Islam and fight against ignorance and superstition. This means we have to attach much greater importance to Islamic education and Islamic services. The teaching methods and the substance of Islamic education has to change radically.

The Turkish example, the Turkish establishments like the Presidency of Religious Affairs should be carefully studied.