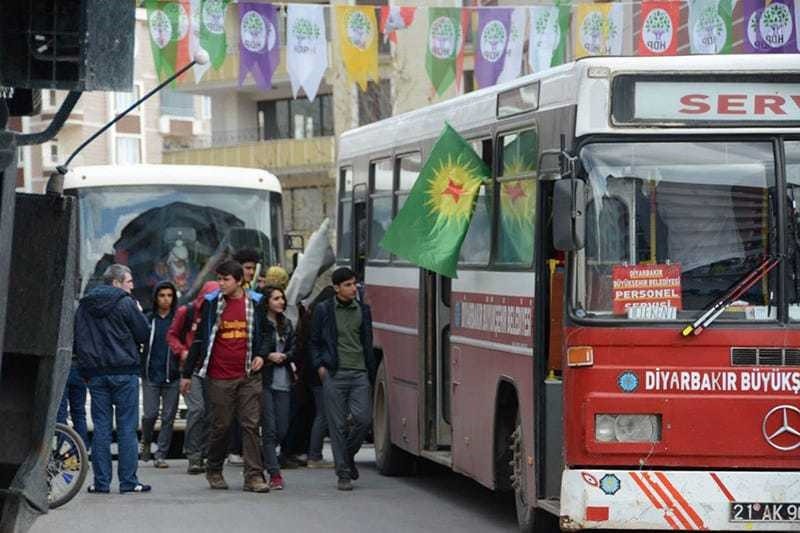 If there is anything to criticize in Ankara's most recent targeting of some oppositions, it is the delay in taking such actions against those oppositions who carry out pro-PKK terror propaganda

If you ask the opposition groups in Turkey the government is trying to silence the opposition by targeting left-wing daily Cumhuriyet, closing down pro-Kurdish media outlets and arresting Diyarbakır Mayor Gülten Kışanak.

Yes it is true that Cumhuriyet is one of the oldest and most prominent daily newspapers in Turkey and has eventually turned into the voice of the marginal left over the years. It is an arch enemy of the government. Now its executives and some writers have been taken into custody and face arrest.

Yes it is true that a pro-Kurdish newspaper, other publications and news agencies have been shuttered by the government decree with the power of law and is subject to parliamentary approval.

Yes it is true that Diyarbakır Metropolitan Mayor Gülten Kışanak has been arrested and has created an uproar among the militant Kurdish groups.

But it is also true that Cumhuriyet is not simply voicing opposition views and criticizing the actions of the government and President Recep Tayyip Erdoğan but it has been serving as the voice of terrorist organizations especially the left-wing Revolutionary People's Liberation Party-Front (DHKP-C) group that has assassinated businessmen, launched terrorist attacks all over Turkey and targeted the American Embassy with a suicide bomber. The DHKP-C killed a prominent prosecutor in the heart of Istanbul after a standoff with the police and Cumhuriyet tried to justify the action of the terrorists through its headlines and commentaries.

Cumhuriyet today is the shadow of the prominent left-wing newspaper it used to be and there are even claims that it has been kept afloat through the finances provided by the Gülenist Terror Group (FETÖ) led by Fetullah Gülen. Some of its writers have been writing articles against Gülen and his organization but this is regarded as a smokescreen. Cumhuriyet has also supported PKK terrorist actions which was a great shame.

The pro-Kurdish press has been the voice and ardent supporter of the PKK and they have done this openly declaring the terrorists as "freedom fighters" and termed their actions as "resistance." They have openly encouraged the PKK to undertake terrorist actions and tried to justify these through their publications and reports. The pro-Kurdish women's magazine was unique as it was run by women, but it was also unique as it supported violence and the killing of Turkish security personnel by PKK terrorists. You only have to read the reports of the banned Dicle (Tigris) News Agency to see the way terrorism was promoted.

Gülten Kışanak has been notorious in cooperating with FETÖ and also promoting PKK terrorism. She mobilized the resources of the municipality for the PKK. She gave PKK militants jobs and provided machinery and funds for PKK militants to launch terrorist attacks. It is unfortunate that the municipality did not serve the people of Diyarbakır and instead provided a base for the PKK terrorists.

She is one of the many Kurdish nationalist Peoples' Democratic Party (HDP) mayors who have been giving active support to the PKK in its bloody terrorist actions throughout the country.

Turkey has declared an all-out effective war against all terrorist organizations after the failed July 15 coup. Thus it is now going after all sources of terrorism on all fronts. Thus it is no surprise that prosecutors have now targeted Kışanak, pro-Kurdish militant media and left-wing Cumhuriyet. This not an act of silencing the opposition, it is an act of self-defense and should have been launched long ago. If there is anything to criticize, it is the delay in taking such actions and undertaking a proper public information campaign to counter PKK propaganda.
RELATED TOPICS