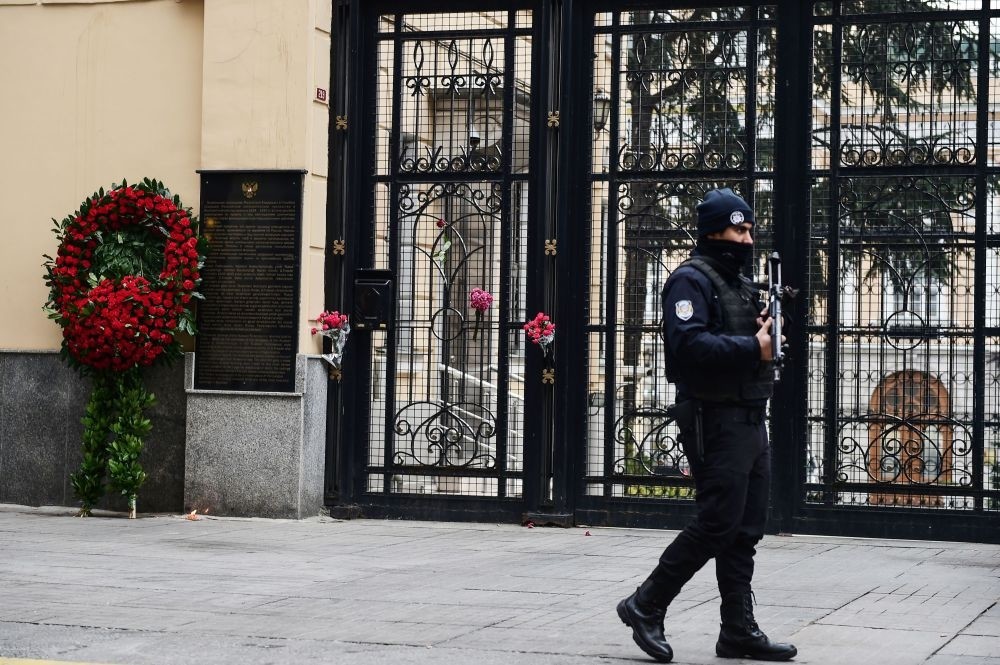 A Turkish police officer standing guard outside the Russian consulate in Istanbul on Dec. 20, 2016, a day after the assassination of the Russian ambassador in the Turkish capital.
by İlnur Çevik Dec 21, 2016 12:00 am

First, they attacked police officers in Istanbul. Then, they bombed military targets in Kayseri. Now, in Ankara, they have assassinated the Russian Ambassador to Turkey, Sergey Karlov.

These recent bombings were the work of the PKK terrorist organization. The recent assassination points to the Gülen Terror Group (FETÖ), which is accused of staging the July 15 bloody coup attempt. These organizations are mere puppets being manipulated by the same set of hands. The perpetrators aim to create a false image of Turkey as a country of chaos, improperly run by President Recep Tayyip Erdoğan, who they believe has to go.

So, who wants Erdoğan to go? You need only read publications in the Western media and listen to the commentaries of Turkey's adversaries in numerous European countries and the U.S. to identify who these people are. They are those who manipulate their national intelligence agencies to wreak havoc on Turkey as a nation, trying to force the fall of Erdoğan.

These are the same people who have hosted the PKK in parliamentary sessions held across Europe. They are the enablers who offer the PKK an open mic with which to stage PKK demonstrations freely in the streets, in stark contrast to restrictions placed on Turkey's right to hold counter demonstrations in those countries. The fact is that the bombings that occurred in Istanbul and in Kayseri was done by the ones who host the PKK in their parliaments across Europe. They are the ones who allow the PKK to stage demonstrations freely on local streets while banning counter demonstrations organized by Turks. The fact that the bombs that went off in İstanbul and Kayseri were sophisticated explosives that could only be manufactured by Western intelligence agencies is something that has to be taken seriously.

These are the same people who have asked Turkey to change the counterterrorism laws in the country that aim to minimize violence in relation with the PKK, ironically telling Turkey to stop implementing laws against the PKK if the country still wishes to achieve visa liberalization for Turks in EU member states.

They are the ones who were telling us to scrap the State of Emergency imposed after the coup attempt. Actually they are the ones who have been telling us that we have been too heavy handed on Gülen supporters in Turkey after the coup, firing tens of thousands of FETÖ-related civil servants including policemen and soldiers. The assassination of the Russian ambassador by a police officer who had previous FETÖ affiliations shows two things… One, that we have not been successful in weeding out the FETÖ elements in the police force and second, that we should do more work to eliminate the Gülenists who have infiltrated positions in the civil service. Finally, the fact that we still have FETÖ killers among us is a cause for deep concern.

Turkey has to do much more work to identify and eliminate Gülen followers in the state ranks and elsewhere. The fact that a killer like the assassin of the Russian ambassador is among us suggests that there are more of them around who could possibly assassinate other people, especially prominent Turks.

After FETÖ staged the downing of the Russian plane in November last year, it caused a deep rift between Ankara and Moscow. FETÖ is now trying to damage Turkey's flourishing relations with the Kremlin by assassinating the late ambassador. This is senseless. No one will fall for these tricks. On the contrary, the assassination has brought Turkey and Russia closer together to fight a common enemy. That is why we say the real aim is to create the image that Turkey is a land of chaos. They will fail. Turkey and Erdoğan will prevail.
Last Update: Dec 21, 2016 1:07 am
RELATED TOPICS