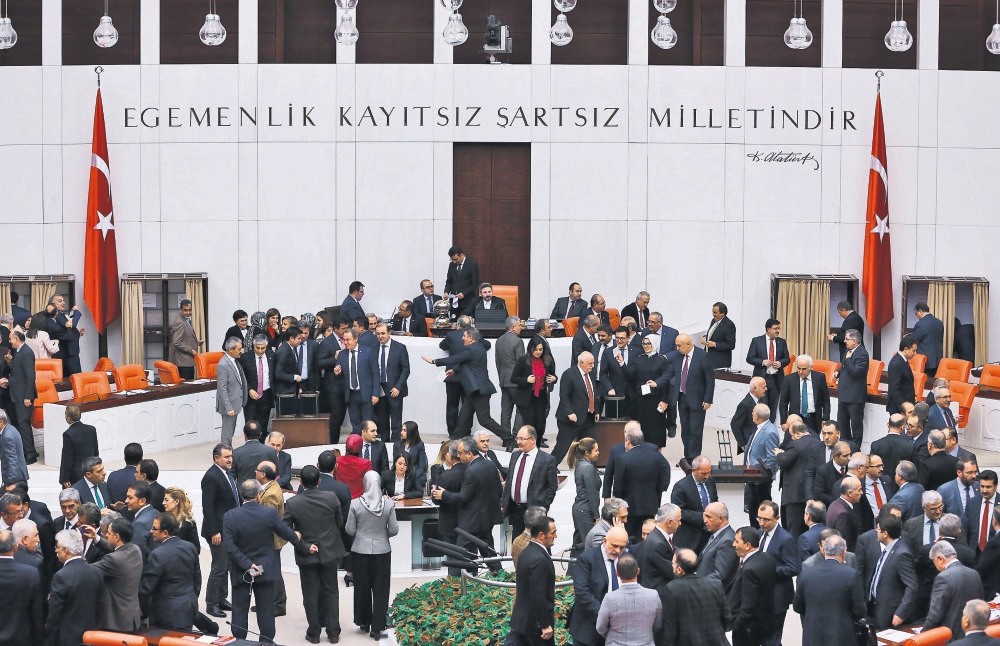 Turkish lawmakers casting their votes during a session debating the reform of the Constitution at the Turkish Parliament in Ankara.
by İlnur Çevik Jan 17, 2017 12:00 am

The following years will be a period of renovation and repair of the state system in Turkey, which will also help President Erdoğan achieve the targets he has set to transform Turkey into one of the world's leading states

A major hurdle has been overcome. The constitutional amendments that will usher Turkey into a new presidential system of administration has cleared the first round of debates with a comfortable majority, thus it is now a foregone conclusion that Parliament will approve the amendments in a second round of balloting and thus the scene will be set for a referendum in late March or early April.

Opinion polls show that more than 60 percent of the voters will approve the constitutional changes that introduce the presidential system. Thus the country will be run by the new system as of this summer.

The period between this summer and November 2019 will be a transition phase and after the presidential and parliamentary elections in 2019, the system will function under the leadership of the new president who is expected to be Recep Tayyip Erdoğan.

One would have preferred the new system to be the product of a complete new constitution drafted by civilians and yet this was impossible as the parties represented in Parliament could not agree on a common draft. So the amendments to the existing Constitution was the second best solution.

Thanks to the contributions of the opposition Nationalist Movement Party (MHP) of Chairman Devlet Bahçeli, the amendments drafted by the ruling Justice and Development Party (AK Party) cleared Parliament. The MHP also did some fine-tuning on the amendments that were accepted by the AK Party. The main opposition Republican People's Party (CHP) on the other hand vehemently opposed the amendments and have put up a tough opposition that at times turned into violent outbursts. The CHP could have made an impact by demanding certain changes in the amendments like the MHP, but instead it opted for a more destructive and aggressive attitude that only created deep tensions inside and outside the Parliament.

With the new system, the president, who already had vast powers and was not accountable for his actions, will now be the head of the executive and will be accountable to Parliament and the people for his administration of the country.

He now has the powers to reshape the bureaucratic structure and system of management of the country that will cut down bureaucracy and help the president create shortcuts to speed up the decision-making mechanism as well as its applications.

This is extremely useful because President Recep Tayyip Erdoğan as the head of state and as the prime minister in the past 15 years has seen the administrative flaws in the country, has seen how the bureaucracy works - or does not work - and what is needed to speed up the state system. Erdoğan is a man of action and wants speedy results. This will give him the edge to do all this. Thus the next few years will be a period of renovation and repair for the state system. It will also help to achieve the targets set by Erdoğan to transform Turkey into one of the leading global states by the year 2023, the 100th anniversary of the Republic of Turkey.

Erdoğan has met strong resistance and opposition both at home and abroad. Those who opposed him at home did not do this because of their love for the country but because Erdoğan had put an end to their system of plundering the resources of the country. Those who opposed him abroad did this because they realized that they could no longer manipulate Turkey as they wished.
Last Update: Jan 17, 2017 1:53 am
RELATED TOPICS