Can the Trump administration appease Turkey? 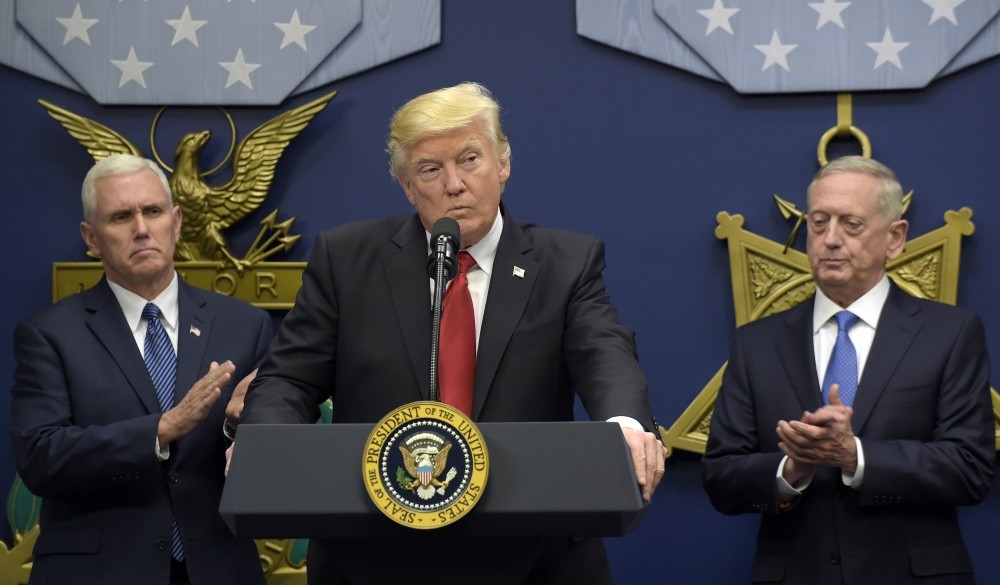 U.S. President Donald Trump (C) accompanied by Vice President Mike Pence (L) and Defense Secretary James Mattis (R) as he speaks during an event at the Pentagon in Washington, D.C., Jan. 27.
by İlnur Çevik Feb 22, 2017 12:00 am

If the Trump team plays the same game again in Syria by cooperating with Syrian Kurdish militant groups, the PYD and YPG, Turkey-U.S. relations will absolutely come to an end

President Recep Tayyip Erdoğan and his American counterpart Donald Trump have agreed to revamp Turkish-U.S. relations which had hit an all-time low during the Obama administration. Since then the two sides have been involved in a series of top-level meetings and have been listening to each other with great intensity. In fact Turkey has also discussed with leading American Senator John McCain on how to restore working relations with Washington.

Turkey has made two requests from the U.S. and is awaiting a response from the Trump administration.

One is the extradition of Fetullah Gülen, who is regarded as the ringleader of the failed July 15 coup attempt. The other is a demand by Ankara that the U.S. drop its support for the Syrian Kurdish militants of the Democratic Union Party (PYD) and stop providing arms to this group, which is an extension of Turkey's Kurdish secessionist the PKK terrorist organization.

The first issue is complicated. Even if the whole judicial process was completed and Gülen was sent to court and an extradition order was issued (and even this is long delayed) then a legal battle will inevitably start, which is a very long process. We have seen how the American legal system works and how Trump has had to endure it when he ordered a ban on visas for the citizens of seven Muslim countries and the U.S. federal courts stopped him.

What the Americans can do about Gülen is put him under house arrest, curtail the movements and activities of his followers in the U.S. and confiscate the assets of this criminal gang. That is what we should be aiming at.

Of course then there is the problem of the massive U.S. military aid given to the Kurdish militants in northern Syria. Ankara has warned the U.S. over and over again that the arms it has provided to the PYD and its military wing the People's Protection Units (YPG) has fallen into the hands of PKK terrorists who have used them in violent incidents and bombings in Turkey.

Turkey has gained control of the strategic Syrian city of al-Bab and has wrestled it from Daesh, much against the expectations of American experts, and has served notice that those in Washington are misleading the Trump administration. Now Turkey says, coupled with American forces, Turkey can finish off Daesh provided the Americans abandon the PYD.

At the moment there seems to be an intense debate among the American decision makers on the merits of kicking out the PYD and collaborating with Turkey to take over the city of Raqqa, which is the heart of Daesh's apparatus. There is talk that the decision-makers are slightly inclined towards the PYD. If this is the case we could well be in for a serious conflict between Ankara and Washington.

U.S. commanders are being told they can take Raqqa with the lone help of the PYD. This is a clear case where the U.S. is playing with fire in Syria. The Arab tribes around Raqqa do not want a Kurdish presence in their region and will not cooperate. Besides that, the Arabs are aware that once the Kurds enter Raqqa (and even that is a big question mark) they will try to establish a permanent presence in this Arab city as they did in many places in northern Syria and that will create more feud and discord.

The U.S. has to make a good assessment of what it is getting into and the future repercussions of its actions not only in Syria but also on Turkish-American relations.
RELATED TOPICS