Germany is hostage to the PKK 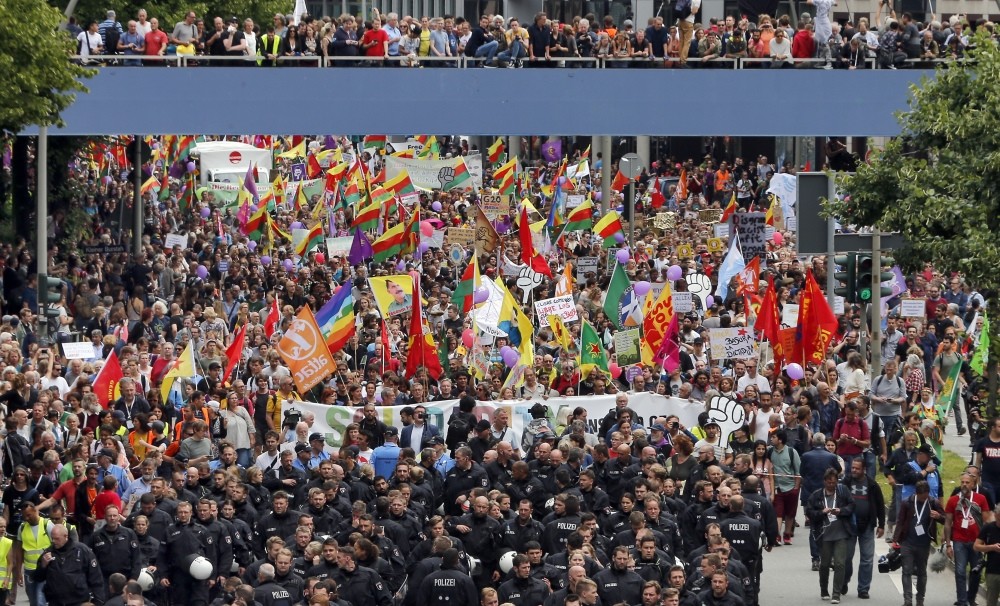 German riot police walk in front of protesters, including the terrorist PKK sympathizers, during demonstrations at the G20 Summit in Hamburg, July 8.
by İlnur Çevik Jul 11, 2017 12:00 am

It is sad to say, but Berlin is acting as a shelter for terrorist groups that target the national security of its ally

The PKK terrorist organization, which has been waging a secessionist war against Turkey for nearly four decades, has taken Germany hostage. The failure of the German authorities to act against the PKK militants that are active in the country, the way the PKK was allowed to slip into the anarchist groups during the G20 summit in Hamburg and the manner it wreaked unprecedented havoc in the streets clearly suggests that Berlin is unable to cope with this terrorist organization and has accepted it as a reality that has to be lived with.

There are two arguments to explain the tolerant German attitude to the PKK on its soil. One is that the German authorities are actually supporting, sheltering and even financing the PKK and using it as a trump card against Ankara. The other is that the Germans are concerned that the PKK could unleash its violence in the streets of Germany and they would not be able to cope with it.

It is true that over the decades German politicians, especially those with left-wing views and the notorious Greens have displayed deep sympathy for the PKK and have even regarded its militants as "freedom fighters" rather than terrorists who have gone as far as to kill Kurdish women and children in Turkey. Yet, harboring the PKK has never been German state policy.

In recent times the German authorities must have seen the PKK's terrorist activities in Germany, ranging from extortion to open terrorist activities against Turks and Kurds living in Germany. It is no secret that the PKK is involved in drug, arms and human trafficking in Europe. Many European authorities, including the Germans, have acknowledged this over and over again. There are Interpol reports as well as intelligence reports to support this.

At one point German authorities were arresting some PKK militants and putting them on trial on terrorist charges. Yet nothing has come out of these cases and they have trickled into oblivion while Turkey has presented 4,400 files on PKK sympathizers in Germany and the authorities are apparently still "studying" these files, which does not fit the notorious efficiency of the German system.

The PKK was on the streets of Germany last week with its sympathizers chanting secessionist slogans and waving the flags of the banned terrorist organization and posters of PKK chieftain Abdullah Öcalan, who is serving a life sentence in Turkey for acts of terrorism and treason. Yet, German authorities keep on telling us that they have banned any banners or posters of the PKK. German Foreign Minister Sigmar Gabriel said only last week that he could not accept the fact that his government is not allowing President Recep Tayyip Erdoğan to address Turks in Germany while PKK militants are allowed to roam the streets of Germany chanting PKK slogans and brandishing posters of Öcalan.

So, what the German authorities say and what they do are two different things. The PKK is still running amok in the streets of Germany and nothing is being done. The PKK has played a key role in the violent demonstrations during the G20 summit, which shocked the Germans.

So it seems that the PKK is actually challenging the Germans, showing them that they can unleash their bloodbath in the streets of Germany, as they have done in the streets of Turkey. This is exactly what Turkey and President Erdoğan have been telling German authorities for years. If you pay lip service to terrorists like the PKK and even the Gülenist Terror Group (FETÖ) that tried to stage a coup on July 15 last year then one day those terrorists will turn against you.

This is what German Chancellor Angela Merkel and her colleagues should be considering in the days ahead as they head for parliamentary elections.