US faces its own hell with white supremacists 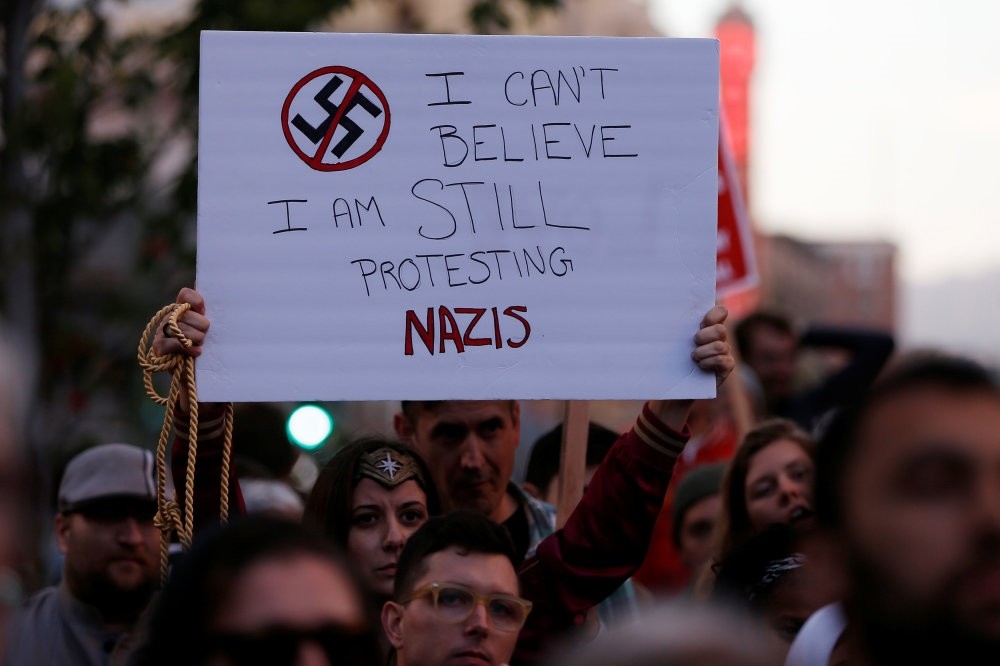 A demonstrator holds a sign during a protest in response to the Charlottesville car attack on counter-protesters after the ,Unite the Right, rally organized by white supremacists, Oakland, California, Aug. 12.
by İlnur Çevik Aug 15, 2017 12:00 am

When the U.S. attempts to trigger conflicts in all parts of the world, supporting terrorist groups, some domestic problems, like the recent one in Charlottesville, come up

While some circles in the United States have plunged our region into violence and chaos, it seems they are facing their own hell back at home at the hands of the white supremacist movement, which is slowly plunging the country into a serious racial conflict that could well threaten the future of the world superpower.

It is clear the values that Americans boast about, which were created by the founders of the U.S., seem to be eroding fast… But it is nothing new.

What is new is that the white supremacist movement is gradually getting support and encouragement from President Donald Trump, who sowed the seeds of this movement during his controversial presidential campaign.

The latest events in Charlottesville, the fact that authorities had to declare a state of emergency, and the initial reluctance from Trump to condemn the white supremacist movement over the incidents, show that the U.S. is stepping into a new era of racial conflict and supremacist agitation. The events that started with Saturday's chaos erupted as neo-Nazis, skinheads, members of the Ku Klux Klan, and other white supremacist groups staged a rally to protest the city of Charlottesville's plans to remove the statue of a Confederate General Robert E. Lee… Peaceful counter-protesters arrived and marched downtown, carrying signs that read "black lives matter" and "love."

The two sides quickly clashed, with hundreds of people throwing punches, hurling water bottles and unleashing chemical spray. Some came prepared for a fight, with body armor and helmets. Videos viewed around the world on social media showed people beating each other with sticks and shields. Amid the violence, a Dodge Challenger driven by a white supremacist tore through the crowd killing and wounding people.

This is bad news for America. The fact that Trump is not prepared to condemn the right wing movement and his putting protesters and counter protesters in the same basket has been a source of outrage in the U.S.

The blacks and the Hispanics, which have huge and powerful communities in the U.S., are all watching these events with deep concern, especially after President Trump gave out signals during his presidential campaign that he is prepared to pay lip service to the white supremacist movement.

Americans have to be aware that when they play with fire in all parts of the world, support terrorist groups that serve their purpose, openly strive to destabilize governments and help tyrants, the world will react to their domestic problems like the Charlottesville incident with indifference, and some people will say "they had this coming."

Those who preach high values in the U.S. seem to be at a loss in view of the white supremacist movement.